A Multicultural Perspective on Steampunk 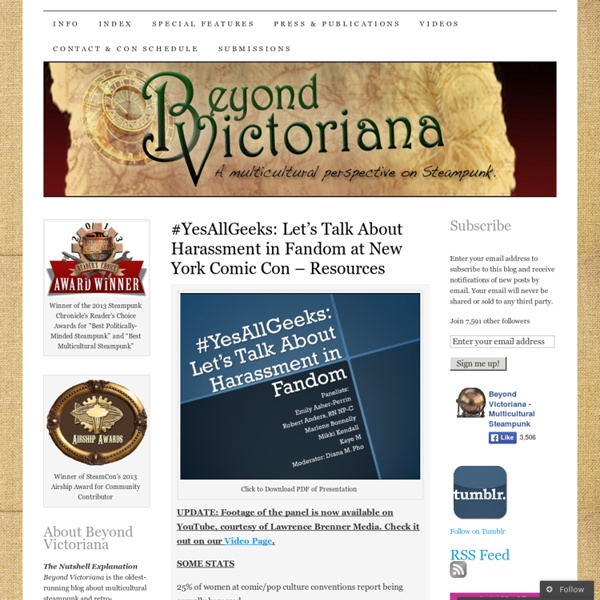 Twenty Must Read Steampunk Books – An Introduction to the Genre This list is the first in a projected series of genre introduction lists intended to provide extensive overviews of various speculative subgenres. They aim to provide a resource for anyone who is interested in a particular subgenre but doesn’t quite know where to start. While this list is by no means all-encompassing, we believe that if you read some of these books you will have a working knowledge of what steampunk is all about. Steampunk is a hard subgenre to evaluate since the decision to classify a novel as steampunk often relates to aesthetics and may have little to do with the overall plot or feel of the novel. Therefore, when choosing books for this list, I have endeavored to explore all sides of steampunk by presenting a selection of books with varying styles, vastly different plots and different themes. For simplicity’s sake, I did not included works that anticipated aspects of steampunk, such as H. Many of the books on the list are installments in longer series.

Aliette de Bodard » Blog Archive » Aztec steampunk So, I’ve recently noticed I started writing Aztec steampunk (“Memories in Bronze, Feathers and Blood”, up at Beneath Ceaseless Skies, “Age of Miracles, Age of Wonders” forthcoming in Interzone, and “Prayers of Forges and Furnaces”, which I haven’t sold yet). I’ve had several people mentioning how it’s a bit odd to be mixing Aztecs with the steampunk aesthetic, and that set me wondering about where I was coming from when I was writing that kind of stuff. Insofar as I can express it, it goes like this. Those steampunk stories I’ve read (and I’ll say right here and now that I haven’t read that many of them and don’t consider myself a steampunk expert, not by a large margin) derive a strong appeal as sensaofwunda stories with a retro feel: you have goggles and all sort of tech from dirigibles to odd-shaped machines involving steam and brass; there are explorers and archaelogists, wealthy spinsters and anarchists, mechanical men and proto-computers. I’m not criticising.

steampunk defended In my opinion, Stross has at least one valid point, one that doesn't go away by just declaring steampunk to be "cool", like Westerfeld did, or stressing the utopian qualities of the 19th century, like Valtat: It is easily forgotten today that the genre's origins, at least when seen in direct relation to cyberpunk, are dystopian, not utopian, in nature. Steampunk shows a 19th century spun out of control, full of dangerous, unbound technological possibilities and sociological changes that indeed had lots in common with the postmodern worlds of William Gibson, Bruce Sterling and the like. Just like the cyberpunks, authors like Oscar Wilde and Joris-Karl Huysmans turned the old values upside down, declaring technology superior to nature, the illusion preferable to the real. However, the heroes of cyberpunk didn't stop there. Sometimes, steampunk still remembers this. But sometimes, there's just too much coolness.

A Beginner’s Guide to Steampunk Literature From humble beginnings as a loosely defined sub-genre of science fiction, steampunk has evolved into a cultural phenomenon that combines ‘a Victorian aesthetic and a punk-rock attitude’; one that has come to influence more than just literature. The creation of the ‘steampunk’ term is usually attributed to the science fiction author K.W. Jeter, who used it in a letter to Locus Magazine. He believed novels written in what he described as the ‘gonzo-historical manner’ would be the next big thing but only if there was a general term that described them as a genre. It’s still inadequate to explain steampunk as just ‘Victorian Fantasy.’ In 1990, steampunk was introduced to a wider audience with The Difference Engine by William Gibson and Bruce Sterling, in which the mechanical computer Charles Babbage theorized in 1822 was successfully built and led to the dawn of an Information Age in the late 19th century, rather than 100 years later. Boneshaker by Cherie Priest Soulless by Gail Carriger

Steam Garden: Tokyo, Japan steampunk party at Christon Cafe Shinjuku. Japanese cosplay fashion event. | LA CARMINA. Japanese Street Fashion The concept of Steampunk is only beginning to gain recognition in Japan, even though there have been many works that incorporate the aesthetic, such as Katsuhiro Otomo’s anime film Steamboy. My Tokyo-based friends Kenny Creation and Luke Chaos have been passionate about Steampunk for some time, and last year, they founded the event Steam Garden. (Photo above by Aki Saito) On March 10th, I went to their fourth event, themed “Celtic Fantasy.” Each event has a different theme, revolving around a past era. This time, the code word was Celtic Fantasy. Kenny Creation DJ-ed possibly the most original set I’ve ever heard… it was exclusively bagpipe music! In between sets, there were mesmerizing performances by motion capture and stunt performer Kaori Kawabuchi (Final Fantasy 13), live music on a variety of period instruments from medieval group Homonculus… … steamcore music and tribal fire dance from Chaos Royale VS Lyon. With the dapper “philosopher” of Steam Garden, Luke. And Japanese Lolitas.

23 Best Steampunk Books - The Best Sci Fi Books Steampunk is science fiction after a few LSD-laced absinthe jello shots; it can include alternate histories, vampires, time travel, magic, and romance. As long as you feature some technology suggestive of steam power, you can go as crazy as you want, and several writers on this list have done exactly that. For some reason, a large number of steampunk authors appear to live in Portland, Oregon. Unique among science fiction genres, steampunk is also a distinctive fashion, complete with old-timey suits, corsets, brass goggles, and dangerous electrical devices. by Thomas Pynchon – 2006 Against the Day is not a breezy read. It all begins in 1893 at the Chicago World’s Fair, with an intrepid crew of young balloonists whose storybook adventures will bookend, interrupt, and sometimes even be read by, scores of somewhat more realistic characters over the next 30 years. Against the Day is convoluted, meandering, and comes in at over 1,000 pages long, so if you dive in, take it slow and steady. by H.

Steampunk: 20 Core Titles By John Klima Featuring H.G. Wells, Neal Barrett & Cherie Priest By John Klima — Library Journal, 03/04/2010 Steampunk is everywhere, from movies like Sherlock Holmes and Howl’s Moving Castle to the Victoria’s Secret Fashion Show and an art exhibition at the Museum of the History of Science in Oxford, England. A little background: The subgenre has its origins in the 1980s with writers such as Tim Powers, James Blaylock, and K.W. Here are ten classic steampunk works and ten more recent titles for a well-rounded collection. The Classics | Recent Works Barrett, Neal, Jr. Blaylock, James P. Summarizing the plot is difficult to impossible, but events begin with a corpse-piloted dirigible that has been orbiting London for years and has finally caught the interest of the Royal Society. Di Filippo, Paul. Gibson, William & Bruce Sterling. 29461-3. pap. $7.99. Jeter, K.W. Moorcock, Michael. Out of print. Powers, Tim. Steampunk. 9. pap. $14.95. Swanwick, Michael. Wells, H.G. Akers, Tim. Lake, Jay.

queering steampunk UPDATED: Donate now at to get this off the ground! One of the really wonderful things about Steampunk is that it, more than any other sub-culture, seems to want to teach us things. I have always been very interested in the technology of the 19th Century, it's been a passion since a very young age. this passion is certainly part of what got me interested in Steampunk in the first place. However, as I delved deeper into the history of technology I got really interested in other aspects of how the world changed during the Industrial Revolution. In particular I became interested in the Women's Movement, which began in the late 19th century, feminism, and gender theory. Chasing down this rabbit hole has lead me to books like Marilyn French's Beyond Power, which is currently blowing my mind and has the feel of one of those books that forever changes to way you view the world. And that brings me to the subject of today's post. Cheers! Jake.

List of steampunk works Although many works now considered seminal to the genre were published in the 1960s and 1970s, the term "steampunk" originated in the late 1980s[1] as a tongue-in-cheek variant of cyberpunk.[citation needed] This article is a list of works in the science fiction and fantasy genres considered by commentators[who?] to be steampunk. Precursors[edit] Steampunk was particularly influenced by, and often adopts the style of the scientific romances and fantasies of the 19th century. Early adaptations of this scientific romance literature genre to film, particularly those from the 1950s and 1960s, are notable precursors of steampunk cinema:[7] In comics/graphic novels[edit] In film[edit] In literature[edit] In music[edit] Steampunk musicians[edit] The following is a list of musicians and bands that have either adopted a steampunk aesthetic in their appearance, or have a decidedly steampunk approach to their music. Other bands that have produced steampunk-themed works[edit] In performance art[edit]

Marvels of Science and Steampunk by *JonHodgson on deviantART vaporpunko First, introductions via Wikipedia & Vikipedio. While I have encountered manifestations of what is now called Steampunk, the term--the named genre--is new to me. Back in the 1960s I watched the TV series The Wild Wild West, an obvious precursor or example of the genre. (And, a few days ago, I made it halfway through the ineptly executed film The League of Extraordinary Gentlemen.) I wrote about the increasing profile of self-referential cultural artifacts in a 1993 essay: Cultural Sophistication and Self-Reference on American Television: Seeds of Hope? Owing to the acceleration of social and cultural change, it becomes obvious how drastically basic social assumptions are different now than from decades past, which has long been a device pursued by TV series, most recently the runaway hit Mad Men. I have already blogged about Andrew Drummond's novel A Hand-Book of Volapük, which is in the neighborhood of steampunk, a genre admired by Drummond.

i like this website best of all the now-myriad steampunk offshoots. if steampunk survives it will be because it takes a non-eurocentric approach. by graywyvern Apr 29