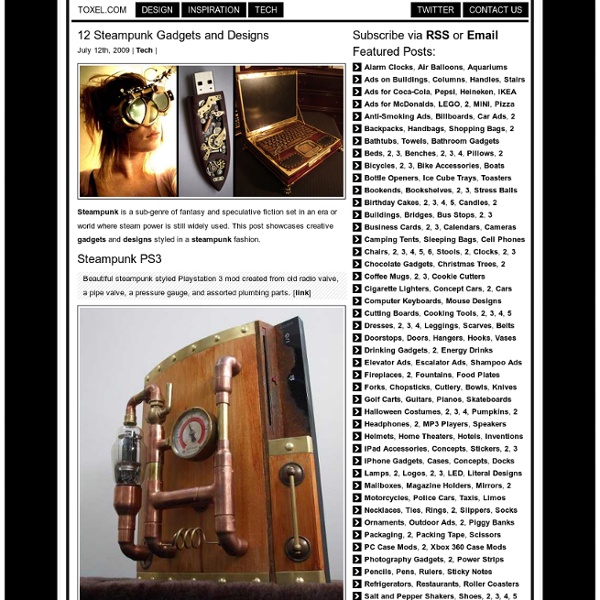 Marvels of Science and Steampunk by *JonHodgson on deviantART Steampunk: 20 Core Titles By John Klima Featuring H.G. Wells, Neal Barrett & Cherie Priest By John Klima — Library Journal, 03/04/2010 Steampunk is everywhere, from movies like Sherlock Holmes and Howl’s Moving Castle to the Victoria’s Secret Fashion Show and an art exhibition at the Museum of the History of Science in Oxford, England. A subgenre of science fiction, it typically (but not always) employs a Victorian setting where steam power and advanced technologies like computers coexist and often features themes, such as secret societies, found in mystery novels. A little background: The subgenre has its origins in the 1980s with writers such as Tim Powers, James Blaylock, and K.W. Here are ten classic steampunk works and ten more recent titles for a well-rounded collection. The Classics | Recent Works Barrett, Neal, Jr. Blaylock, James P. Di Filippo, Paul. Gibson, William & Bruce Sterling. 29461-3. pap. $7.99. Jeter, K.W. Moorcock, Michael. Out of print. Powers, Tim. Steampunk. 9. pap. $14.95. Swanwick, Michael.

A Beginner’s Guide to Steampunk Literature From humble beginnings as a loosely defined sub-genre of science fiction, steampunk has evolved into a cultural phenomenon that combines ‘a Victorian aesthetic and a punk-rock attitude’; one that has come to influence more than just literature. The creation of the ‘steampunk’ term is usually attributed to the science fiction author K.W. Jeter, who used it in a letter to Locus Magazine. He was trying to find a way to describe Victorian fantasy novels like those written by himself (Morlock Night and Infernal Devices), Tim Powers (The Anubis Gates) and James Blaylock (Homunculus). He believed novels written in what he described as the ‘gonzo-historical manner’ would be the next big thing but only if there was a general term that described them as a genre. It’s still inadequate to explain steampunk as just ‘Victorian Fantasy.’ Boneshaker by Cherie Priest Zombies, pirates, airships and mad scientists turn this into great YA steampunk romp. Leviathan Trilogy by Scott Westerfeld

Twenty Must Read Steampunk Books – An Introduction to the Genre This list is the first in a projected series of genre introduction lists intended to provide extensive overviews of various speculative subgenres. They aim to provide a resource for anyone who is interested in a particular subgenre but doesn’t quite know where to start. While this list is by no means all-encompassing, we believe that if you read some of these books you will have a working knowledge of what steampunk is all about. If you read all of them, we will be forced to bow down and acknowledge you as being well on your way to becoming a steampunk virtuoso. Steampunk is a hard subgenre to evaluate since the decision to classify a novel as steampunk often relates to aesthetics and may have little to do with the overall plot or feel of the novel. Therefore, when choosing books for this list, I have endeavored to explore all sides of steampunk by presenting a selection of books with varying styles, vastly different plots and different themes. Enjoy our Introduction to Steampunk list?

Beyond Victoriana | A Multicultural Perspective on Steampunk Copper Plating & Etching Altoids Tins UPDATE: There's some great information on this page and it's comments, but I've recently published a far more comprehensive article here: Etching Tins with Salt Water and Electricity With this project I wanted to try a number of new things: Magazine pages as cheap toner transfer mediaCopper electroplatingEtching Altoid tins with a salt water solution The copper plating met with mixed success, but the other two methods resulted in some nice pieces. Note: blue vitriol and muriatic acid are archaic names for copper sulfate and hydrochloric acid. Magazine pages for toner transfer: While looking for information on transferring toner using a fuser assembly from an old laser printer I ran across several websites where people suggested using glossy magazine pages for transferring printed circuit board images to a copper substrate. Preparing the Altoids tins turned out to be harder then I predicted. Next we: Copper Plating Altoids Tins: From the picture below, this appears to work. Foom!

fairy Steampunk Finger Stylus I use a touchpad GPS regularly at work and lost the pen stylus a long time ago; it was inconvenient anyway trying to hold the stylus, GPS unit, and drive an ATV at the same time. So I made some finger stylussss?Stylii? from old water jug handles for work. For this Instructable I added some extra parts for fun Steampunk styling. Step 1: Cut Handle Out of Water Jug This is simple, just cut out a small section from the handle of the jug. Step 2: Plain Stylus Finish Briefly hold the tip of the stylus in a flame to round it and keep it from being scratchy. Step 3: Paint and Hot Glue Extra Stuff Getting a sense of Steampunk style takes a little intuition and internet browsing for ideas.