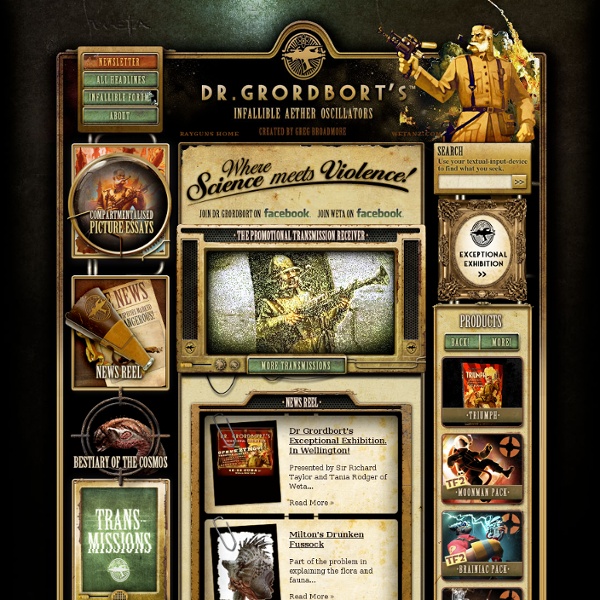 18 Examples of Steampunk Sketches - Steampunk Art From Gear-Headed Superheros to Antiqued Disney Steampunk art essentially captures a genre of science fiction that includes futuristic looks and devices created with vintage methods. It is a very surreal genre and possesses a large following of fans. Steampunk almost represents the perfect balance of old and new. The artwork inspired by this genre that is created is generally very intriguing and hauntingly beautiful. It usually includes a lot of steam and gear-powered machinery as well as Victorian era fashion. Steampunk art has also created magnificent crossovers that include transforming iconic figures from pop culture into surreal and antiqued depictions.

The Galactic Blasters Gun Shop (by @baekdal) #design Written by Thomas Baekdal | Thursday, March 24, 2011 Ever since reading "The Hitchhicker's Guide to the Galaxy" I have always wanted to own my very own Kill-o-Zap. For those who do not know what that is, here is how it is generally described. The designer of the gun had clearly not been instructed to beat about the bush. 'Make it evil,' he'd been told. 40 Most Stunning Steampunk Gadgets inShare2 Some time ago steampunk appeared as a literary genre and with the lapse of time it has transformed into amazing urban art. Instead of fading away, steampunk has gotten increasingly intense and relevant, and right now it seems to be rising to the surface. Many people inspired by the inventions of Victorian era, modern technology and the mistery of dark alternate realities create a lot of amazing stuff with their hands. Here we present you a stunning collection of modern steampunk art. 2inShare

1920's Slang - Camarilla Wiki Welcome to White-Wolf.com. White Wolf Publishing has produced gaming universes for over 20 years including World of Darkness, Exalted, Trinity, and many more. White Wolf merged with CCP Games to focus on translating the World of Darkness IP into a massively multiplayer experience, and the North American office is fully dedicated to making this evolution a reality. steamfashion - Community Profile This community was created for members such as yourself to share your take on what Steampunk fashion is. We are interested to see your creations, though this doesn't necessarily mean you must have sewn or created your attire; combining items into a well-coordinated outfit counts too. We also enjoy seeing interior decoration and other gadgets relevant to the visual style of steampunk. What is steampunk?Steampunk is the science fiction of the steam age, re-imagined with the advantage of modern hindsight. Drawing upon the wealth of historical technology and the scientific fantasies of the Victorian and Edwardian periods, steampunk seeks to reinvent modern wonders such as the computer as the people of the age might have envisioned them.

Brass Goggles:The lighter side of Steampunk Posted by proteus on December 23rd,2013 Two things I love in one photo: [via Brian Kesinger’s Tea Girls] Posted by proteus on October 17th,2013 The Vampire Awakening... Takato Yamamoto - By Meghan | The paintings of Takato Yamamoto have a vicious beauty; their stunning detail is akin to the Ukiyo-e woodblock prints of the 18th century that initially influenced his work, but Yamamoto has developed his style into something he calls “heisei aestheticism.” He combines brutality with serenity in his paintings – blood and gore envisioned in intricate and delicate lines, with a graceful flow running through each scene.

Design*Sponge » Blog Archive » diy project: katie’s glass-jar moroccan lanterns I’m getting a little tired of the winter weather and will take just about any opportunity to daydream about the sunny warm days ahead. These Moroccan-inspired lanterns by Ohdeedoh contributor and DIY expert Katie Steuernagle are the perfect antidote to the winter blues; I love the glow of the rich jewel tones and the intricate gold designs. If you have any old sauce jars lying around, this is the perfect way to make good use of them and get yourself psyched for spring— it will be here before we know it! —Kate CLICK HERE for the full how-to after the jump! Materials

August 2010 Still Image from the PlayStation Home Steampunk Sim, known as Nova Venezia One of the reasons I would argue that there is a strong Steampunk presence in virtual worlds is not only for the ability to design Steampunk environs but also for convenience of interaction. The ability for a person to visit such a location easily from their own domicile plays a circumstance in the virtual experience. Second Life has been, to my knowledge, on the forefront of virtual world Steampunk locales, with such dedicated Steampunk destinations as New Babbage, Caledon, and Steeltopia, among many other locales. Top 10 Steampunk Gadgets Cultural movements that inspire devotion and fanishness are often not given enough credit for the inventiveness they arouse. Steampunk is especially rife with masterpieces of fashion, art, craft, and technology. Every time you think you’ve seen the coolest, most out there steampunk creation another comes along. Of the specimens we’ve come across, these are our ten favorites.

Artist Daniel Dociu Daniel Dociu is Chief Art Director for ArenaNet, the North American wing of NCSoft. Projects in which he participated: Guild Wars, Need for Speed, FIFA Soccer, MechWarrior, James Bond 007. Great architecture, fantastic and bright world you can see in his beautiful artworks. Some of amazing illustrations featured below were created for computer games. Steampunk concept will blow your mind Home » Artwork Steampunk is a sub-genre of science fiction, alternate history, and speculative fiction that came into prominence during the 1980s and early 1990s. Steampunk is often associated with cyberpunk.