Victorian Clothing for Men and Women 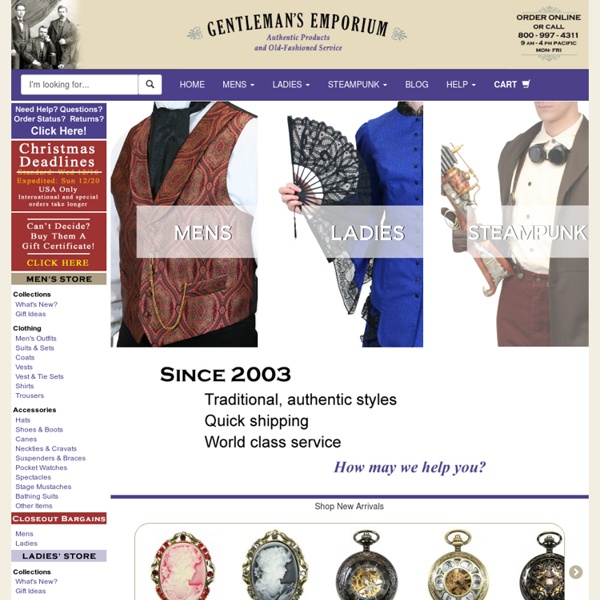 20140424_232934 How to Make a Steampunk Utility Belt | Susan Dennard Steampunk utility belt: the place to carry your Tools of Awesome–or to just hang onto some spare change. Whatevs. No matter what you choose to store, you’re gonna look STEAMPUNK-TASTIC wearing it. Now this part of the costume is easy. To make your steampunk utility belt, you only need a few things, all of which can be found at your local thrift store. 1. 2. 3. 4. Mission Accomplished: Steampunk Utility Belt Complete! Here are some links to other great belt ideas (all courtesy of the fantastic steampunk resource, steampuk fashion): Gail Carriger’s insta-belt (yeah, the author of Soulless!) Another DIY creation (from Finland!) A detailed step-by-step guide for the well-equiped steampunker: You tell me: Would you ever make a steampunk utility belt? Leviathan and A Great and Terrible Beauty ♦ (both are open internationally)

MAGOA - Animal Adventure Time <img class="aligncenter size-large wp-image-2020" alt="Finn The Human - Adventure Time - Papercraft" src=" width="640" height="578" />Download Template : Finn The Human – Template Photo by : hklovesbobaFinn (full title: Finn the Human, known as Finn Mertens in the Farmworld timeline and formerly as Pen in the original short) is the main protagonist of the series Adventure Time.As shown in “Memories of Boom Boom Mountain,” Finn appears to have been abandoned in the woods during infancy. He reveals that he made “boom boom” (Finn’s word for defecation) on a large leaf, fell on it, and lay there crying until Joshua and Margaret (Jake’s parents) rescued him from the wilderness to raise him alongside Jake, who becomes like a brother to him (as such, Jermaine is also Finn’s adoptive brother).

Incredible Typewriter Birds by Jeremy Mayer // Visual Disobedience On Tuesday, July 2, 2013 Sculptor and artist Jeremy Mayer has is known for creating ingenious models from old discarded typewriters. This time around he has used typewriter parts to create a set of swallows! What is astounding is, he does not use a solder or glue to make these art pieces, but resorts to cold assembly. Since he uses only typewriters for to build the models, Mayer takes a significant amount of time to source the right materials and find multiple sets of identical parts to put together these sculptures. While working on this series he realized that his design makes it feasible for the wings to partially retract thereby making the pieces even more appealing. Via Colossal You might also like: