At the intersection of Romance and Technology. 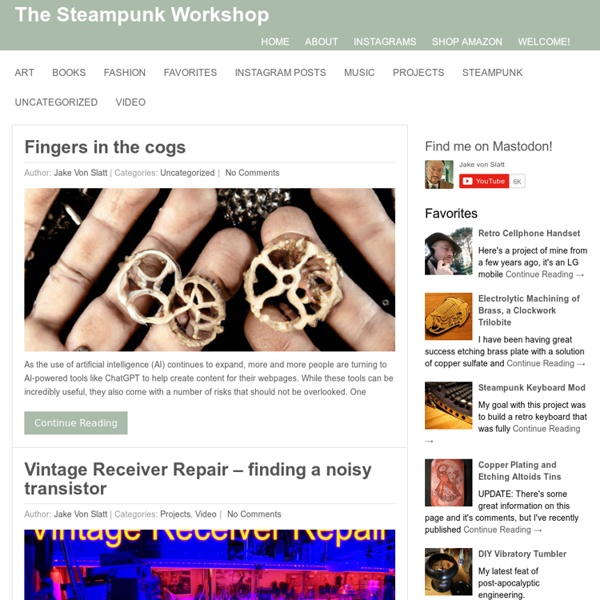 o there's this thing. It's called the Grilled Cheese Invitational, and it's pretty much what it sounds like. Their motto is 'Bread, Butter, Cheese, Victory!' and they're holding the last one ever this year. I'm competing and it's going to be great. This is about fun.

Brass Goggles: The lighter side of Steampunk Posted by proteus on December 23rd,2013 Two things I love in one photo: [via Brian Kesinger’s Tea Girls] Posted by proteus on October 17th,2013 A Steampunk Badminton tournament sounds like a fantastic idea. Posted by proteus on October 11th,2013 Steam, Brass and Fzz March 27, 2013 Sculpture Dear friends, My brother and I recently spent a wonderful day with sculptor and all-round eccentric Alan Ross of ArtInSteel. The result of Alan’s patient help was that my welding improved immensely, and he humoured my ambitions when I said I wanted to make a sculpture of a bird in the afternoon. Well, here it is.

steampunk fashion - getting started with steampunk jewelry-makin So I have this box of copper findings that I've had for years. It was given to me by a woman who used them to make stained-glass. I don't know what their original purpose was but they look antique. 24hrs With a Steampunk Aeronaut – Narrative Showcase - Noupe Design Blog May 10 2010 By Claire Stokoe Steampunk is a sub-genre of science fiction in an alternate Victorian era that runs mostly on steampower. The word Steampunk was coined by the science fiction author K.

Steampunk Leather Top Hat Tutorial I have received several requests for a tutorial on making my steampunk leather top hat, shown above, and so, here it is. The first drawing shows the three pattern pieces (not to scale). The wave on the bottom of the crown is what gives the brim its distinctive curve. The pattern below is the one that I used to make my top hat. 7 Free Wooden Gear Clock Plans for You Eccentric, Masochist Woodworkers Ever since I had the pleasure of seeing Keith Chamber’s wooden gear clocks in person, I’ve been on the look out for more all wood clocks. See Wooden Gear Clocks by Keith Chambers >> I think wooden clocks are one of those dividing lines in woodworking… To have the aspiration to make a clock, entirely from wood, puts you in your own unique category. One well-known seller of wooden clock plans, Clayton Boyer, pitches his most-difficult plans like this: “Selling plans for the clocks on this page goes against my basic philosophy of trying to spread joy in the world through creative woodworking.

Timepieces - Retro Thing E. Barbour writes, "Former Philips engineer Ronald Dekker is famous for his website full of unusual construction projects. He now has built a digital clock that uses Dekatron (or decatron) tubes as displays." How to make STEAMPUNK jewelry Wikipedia defines Steampunk as “a subgenre of fantasy and speculative fiction that came into prominence in the 1980s and early 1990s. The term denotes works set in an era or world where steam power is still widely used-usually the 19th century, and often set in Victorian era England-but with prominent elements of either science fiction or fantasy, such as fictional technological inventions like those found in the works of H. G. Wells and Jules Verne, or real technological developments like the computer occurring at an earlier date. Other examples of steampunk contain alternate history-style presentations of “the path not taken” of such technology as dirigibles or analog computers; these frequently are presented in an idealized light, or a presumption of functionality. Steampunk is often associated with cyberpunk and shares a similar fanbase and theme of rebellion, but developed as a separate movement (though both have considerable influence on each other).