56 Victorian Slang Terms That We Should Definitely Bring Back. Guaranteed To You A Gigglemug. In 1909, British author Andrew Forrester wrote a reference book titled: 'Passing English of the Victorian era, a dictionary of heterodox English, slang and phrase'. 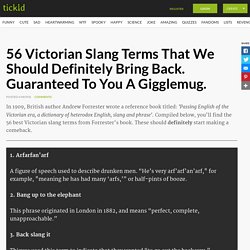 Compiled below, you'll find the 56 best Victorian slang terms from Forrester's book. These should definitely start making a comeback. 1. Arfarfan'arf A figure of speech used to describe drunken men. 2. This phrase originated in London in 1882, and means “perfect, complete, unapproachable.” 3. Awesome Steampunk Interior Design At Truth Cafe In South Africa. These copper pipes, gears and steel railings are not from the interior of an ironclad battleship or WWI factory – they‘re part of the brilliant interior steampunk design of Truth Coffee‘s cafe in Cape Town. 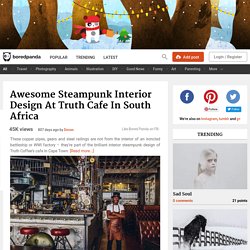 [Read more...] The idea works in part because the coffee equipment used by Truth Coffee, with its various pipes and levers, already lends itself to a steampunk aesthetic. Hibernacula - Photos du journal. Order Krampus Stuff Here! ⋆ Slay Belles the movie. Bad Juju Productions © 2015 Indiegogo The Indiegogo campaign has finished, and although we didn’t quite reach our goal we did raise over 15k! 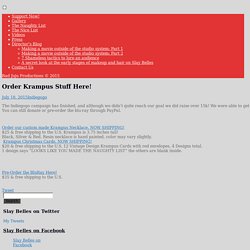 Just some steampunk gators. Star Wars Characters Reimagined as Ancient Greek Statues by French Artist Travis Durden. I’ve never specifically asked myself what Yoda and and Darth Vader might look like if reimagined as classical Greek nudes, but I can’t say I’m disappointed that somebody made this non-dream a reality. 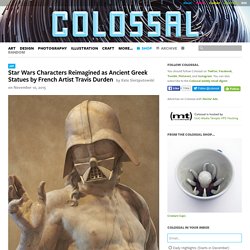 Artist Travis Durden took this idea to an artistic level, using digital technology to sculpt five Star Wars figures out of faux-marble. I Make Robot Lamps From Found Objects. It’s an obsession to scout around for old electronics, appliances, other people’s junk really or scavenge at scrap yards and take unrelated found objects, take them apart and build something totally new from scratch. 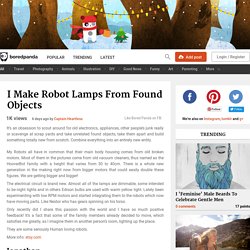 Combine everything into an entirely new entity. My Robots all have in common that their main body housing comes from old broken motors. Star Wars Speeder Bike Drone Is Fully Operational. Subscribe Share on Facebook Share on Twitter Share Tweet Adam Woodworth is a Google engineer and Star Wars fanatic who had an awesome idea: to witness the firepower of a fully operational quadrocopter drone. 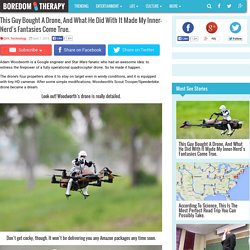 The Qwerkywriter Bluetooth Keyboard » Review. 11 Pictures That Prove Star Wars And Steampunk Were MADE For Each Other. So apparently Star Wars and Steampunk were destined for each other. 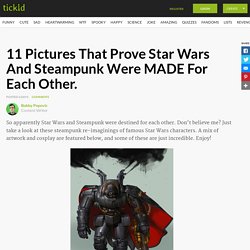 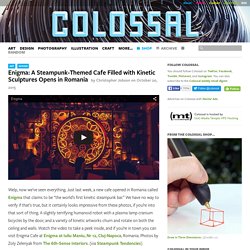 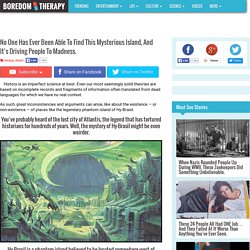 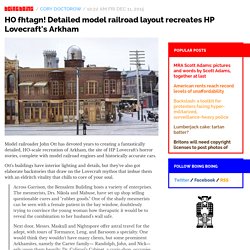 Ott's buildings have interior lighting and details, but they've also got elaborate backstories that draw on the Lovecraft mythos that imbue them with an eldritch vitality that chills to core of your soul. Across Garrison, the Bensalem Building hosts a variety of enterprises. The mesmerists, Drs. Steampunk Batman.

This Hardcore Mad Max Fan Turned His Wheelchair Into Epic Cosplay. Badass. My town has a Steampunk Lincoln. Steampunk Stormtrooper. Vintage Ring Boxes Turned Into Detailed Historical Dioramas By Talwst. In an unexpected but effective mix of unlikely media, Toronto-based artist Talwst has created a series of miniature dioramas inside of antique ring boxes that capture wide array of scenes from various historical periods. According to the artist, the idea for this series of miniature dioramas came about when a street vendor in Paris handed him an antique ring box and told him “I want to see what you make with this.”

Talwst created a scene of a figure emerging from the sea and has been creating tiny scenes ever since. The antique nature of the ring boxes he uses, as well as subtle details used in his tiny dioramas, help drive home his focus on history; “I want the viewer to open the box and feel they have been transported to another world,” he told the Guardian. More info: talwst.com | Facebook | Instagram | Twitter (h/t: mymodernmet) Geek Universe - Live Long and Geek Out - fanart & cosplay. DIY Project: Make Your Own Great Steampunk Keyboard. Steampunk keyboards are popping up everywhere. 10 Spooky Quotes From Edgar Allan Poe. #8 is Haunting. 1. I became insane, with long intervals of horrible sanity. - Letter to George W. The only way to eat books.