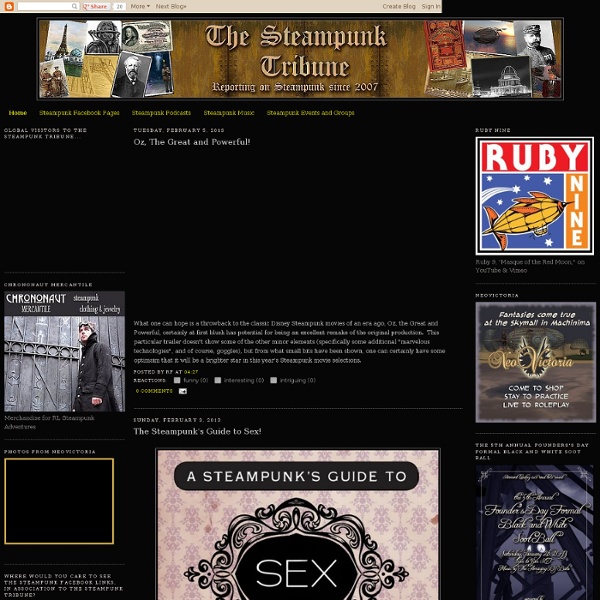 My home in the Steamlands, New Babbage Travel photo #3, by Mr. A.E. Cleanslate Yes, the header is correct. After much deliberation and consultation, I've decided to end the run of the Steampunk Tribune, one of the genre's longest running continuous blogs.

Thoughts on Steampunk by Traveler Posted By Traveler on 14. April 2014 Ever since I was made aware of Steamgirl.com I have had an eye on the site. A lot has happened, but I am coming back to that later, in the second part of this article. 30 Habits that Will Change your Life Developing good habits is the basic of personal development and growth. Everything we do is the result of a habit that was previously taught to us. Unfortunately, not all the habits that we have are good, that’s why we are constantly trying to improve. The following is a list of 30 practical habits that can make a huge difference in your life. You should treat this list as a reference, and implement just one habit per month. This way you will have the time to fully absorb each of them, while still seeing significant improvements each month.

The Steampunk Librarian - Iceweasel We have another Burton & Swinburne adventure to give away to some lucky person! Three years ago, we started our review of The Strange Affair of Spring Heeled Jack, the first book in Mark Hodder’s series, thusly: In the middle of this place and time -- London, 1861, to be exact -- Mark Hodder places explorer Richard Burton and poet Algernon Swinburne as the protagonists of a wonderful tale. It begins as one would expect a normal story involving Burton to begin, with him planning to debate John Speke at the Royal Geographical Society...but then there is violence and chaos, and Burton takes the atmospheric railway home and receives a message by greyhound which... Wait, what? Now, in The Secret of Abdu El Yezdi, the action begins in 1859.

Steampunk Girl "A work of Coulton-ic genius. A thing of beauty." -Ken Denmead, author of GeekDad "This is an artist to keep an eye on." -Brandon Sanderson, author of The Gathering Storm, Elantris, & The Mistborn Trilogy Steampunk Girl Artwork by Geek Artist Extraordinaire Len Peralta. template Finishing Your Novel “A writer is someone who finishes.” -- Thomas Farber This section is for you if: Steam, Brass and Fzz - Iceweasel March 27, 2013 Sculpture Dear friends, My brother and I recently spent a wonderful day with sculptor and all-round eccentric Alan Ross of ArtInSteel. The result of Alan’s patient help was that my welding improved immensely, and he humoured my ambitions when I said I wanted to make a sculpture of a bird in the afternoon. Well, here it is.

Thesaurus Free - Android Market Get the power of TheFreeDictionary.com, the world's most comprehensive dictionary. English, Spanish, French, and 11 other languages, plus Medical, Legal, and other specialty dictionaries, all from the most trusted sources. Translate English into more than 40 languages and access dozens of other translation options. Share definitions via social networks, email, and text. Even use the English dictionary without an Internet connection. Content and Features Procedures used by NSA to target non-US persons: Exhibit A – full document Turn autoplay off Edition: <span><a href=" Sign in Beta About us Today's paper

Procedures used by NSA to minimize data collection from US persons: Exhibit B – full document Turn autoplay off Edition: <span><a href=" Sign in Beta Lowy Institute for International Policy - Iceweasel Major Gen (Retd) Jim Molan is author of Running the War in Iraq. The video cameos featured in Dougal Robinson's post, Defence in Depth: Strategic Partners, go to two of the most important concepts in Australian defence: self-reliance and self-delusion. Jack Georgieff looks more directly at self-reliance and reminds us how much has changed in this key defence concept in 25 years. The concept of self-reliance, says Georgieff: