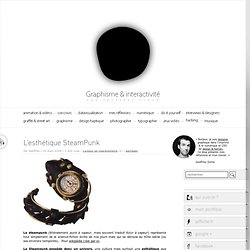 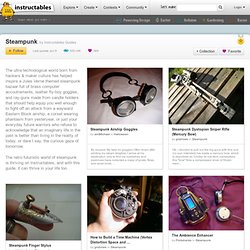 The retro futuristic world of steampunk is thriving on Instructables, and with this guide, it can thrive in your life too. By request: My take on goggles.Often times after piloting my steam dirigible, I arrive at my destination only to find my eyelashes and eyebrows have collected a mass of gnats, fleas, and small birds. ... Well lets put it this way, ive always had this thing about traveling through time, and having a time machine. Creations, inventions et tutoriaux Steampunk, GN, d'un passioné. Steampunk Jewelry Made Simple. May 19, 2011 by suzannelazear. 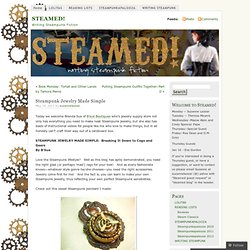 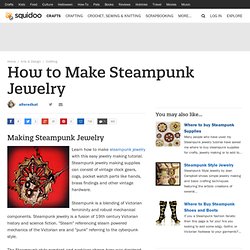 The term denotes works set in an era or world where steam power is still widely used-usually the 19th century, and often set in Victorian era England-but with prominent elements of either science fiction or fantasy, such as fictional technological inventions like those found in the works of H. G. Wells and Jules Verne, or real technological developments like the computer occurring at an earlier date. Other examples of steampunk contain alternate history-style presentations of “the path not taken” of such technology as dirigibles or analog computers; these frequently are presented in an idealized light, or a presumption of functionality. 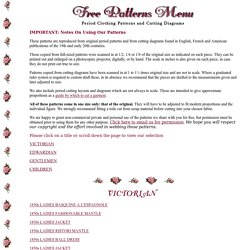 Those copied from full-sized patterns were scanned in at 1/2, 1/4 or 1/8 of the original size as indicated on each piece. Frenchsteampunk.com. 55 Steampunk Reads For The Holiday. Tutorials. Geekery, Girliness, & Goofing Off Search Bar HTML Pages Crafts Home Subscribe to: Posts (Atom) 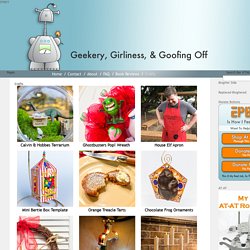 Steampunk Tag. The Steampunk Home. Bustledress.com, Victorian Library, Victorian Dress- Bustle Dress, Victorian Costume, Vintage Clothing, Vintage Clothes. Steampunk Leather Top Hat Tutorial. I have received several requests for a tutorial on making my steampunk leather top hat, shown above, and so, here it is. The first drawing shows the three pattern pieces (not to scale). The wave on the bottom of the crown is what gives the brim its distinctive curve. The pattern below is the one that I used to make my top hat. For a size large, the width of the crown (from side to side) should measure 23.8". You can print it out and enlarge it to get it to lifesize. The crown joins at the back with a butt seam. You should use a lightweight but firm vegetable tanned leather.

See the diagram at the lower right for construction details. This is the partially made hat. BIJOUX. Des étagères originales au style industriel pour lofts urbains. DIY Steampunk Gauges. If you're building steampunk props for cosplay, gauges are a must-have. 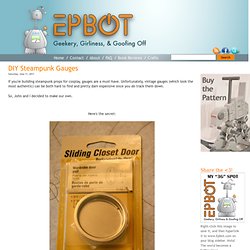 Unfortunately, vintage gauges (which look the most authentic) can be both hard to find and pretty darn expensive once you do track them down. So, John and I decided to make our own. Steampunk keyboard. 7 Free Wooden Gear Clock Plans for You Eccentric, Masochist Woodworkers. Ever since I had the pleasure of seeing Keith Chamber’s wooden gear clocks in person, I’ve been on the look out for more all wood clocks. 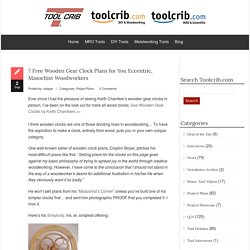 See Wooden Gear Clocks by Keith Chambers >> I think wooden clocks are one of those dividing lines in woodworking… To have the aspiration to make a clock, entirely from wood, puts you in your own unique category. One well-known seller of wooden clock plans, Clayton Boyer, pitches his most-difficult plans like this: “Selling plans for the clocks on this page goes against my basic philosophy of trying to spread joy in the world through creative woodworking. However, I have come to the conclusion that I should not stand in the way of a woodworker’s desire for additional frustration in his/her life when they obviously want it so badly.” He won’t sell plans from his “Masochist’s Corner” unless you’ve built one of his simpler clocks first… and sent him photographic PROOF that you completed it.

29 Wonderful Bike Ads From the Golden Age Of Cycling. Brass Goggles: The lighter side of Steampunk. Incredible Typewriter Birds by Jeremy Mayer // Visual Disobedience. On Tuesday, July 2, 2013 Sculptor and artist Jeremy Mayer has is known for creating ingenious models from old discarded typewriters. 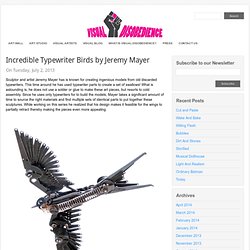 This time around he has used typewriter parts to create a set of swallows! What is astounding is, he does not use a solder or glue to make these art pieces, but resorts to cold assembly. Since he uses only typewriters for to build the models, Mayer takes a significant amount of time to source the right materials and find multiple sets of identical parts to put together these sculptures. While working on this series he realized that his design makes it feasible for the wings to partially retract thereby making the pieces even more appealing. Via Colossal You might also like:

How to Make a Steampunk Utility Belt. Steampunk utility belt: the place to carry your Tools of Awesome–or to just hang onto some spare change. 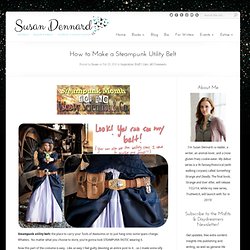 Whatevs. No matter what you choose to store, you’re gonna look STEAMPUNK-TASTIC wearing it. Now this part of the costume is easy. Like so easy I feel guilty devoting an entire post to it…so I made some silly graphics for you. Victorian Clothing for Men and Women. Artist of the Week: Steampunk Illustrations by Antonio Caparo.

Steampunk is a huge cultural phenomenon, spanning books, movies and art. People love the look and “feel” of it, so much that it has sparked numerous conventions around the world. It’s easy to see why this is. The retro futuristic aesthetic is elegant and, to some extent, more easy to understand than regular science fiction premises, seeing as rather primitive technology is used to achieve great feats of engineering marvel, such as flight, time travel and deep sea exploration. The term “steampunk” has been used retroactively to describe the works of such classic authors as H.G. Wells and Jules Verne, but it was apparently first used by James Blaylock, in a letter he sent to the science fiction magazine Locus, in 1987. Free Steampunk Collage Sheets. Another great source of steampunk imagery is Wikimedia Commons. You kind of have to dig for it, it's not as easy as typing steampunk into the search box, but if you try other keywords like diving, dirigible, gears, clockwork, Victorian, patent diagram, and so forth you may turn up something that suits your needs.

Here are a few fine examples of the treasure to be found... An illustration from Jules Verne's classic novel "20,000 Leagues Under The Sea" depicting a squid or octopus seen through the viewbay of The Nautilus. Steampunk Artist Transforms Ocean Trash: Photos. Steampunk 101 by G. D. Falksen What is... What is steampunk? In three short words, steampunk is Victorian science fiction. Here “Victorian” is not meant to indicate a specific culture, but rather references a time period and an aesthetic: the industrialized 19th century. Historically, this period saw the development of many key aspects of the modern world (mechanized manufacturing, extensive urbanization, telecommunications, office life and mass-transit), and steampunk uses this existing technology and structure to imagine an even more advanced 19th century, often complete with Victorian-inspired wonders like steam-powered aircraft and mechanical computers.

Desktop Terrarium with Night Light. Almost every Steampunker has the same problem, to finance all the big projects in your head you must sit many hours on your desk to earn the money. Often the office is dismal and grey. Lantern Clock. Hello All here is my first Instructable, It’s a beautiful Nixie Lantern clock, A little steam punk and a bit Victorian, made up of mostly of found components I tend to communicate better when there is something to show so please look at the images and tags, they sometimes will hold more info than the body of text.

Steampunk Clothing from Gentleman's Emporium. The Greatest Steampunk Festival in the World! Technology & Romance - Fashion, Style, & Science. What is Elfpunk? « STEAMED! How To Create Steampunk Interior Design. How to Make a Steampunk Utility Belt. Steam punk workshop. UPDATE: There's some great information on this page and it's comments, but I've recently published a far more comprehensive article here: Etching Tins with Salt Water and Electricity. Exceptional Exhibition. Artist and designer Greg Broadmore is the creator of Dr. Steampunk. Steampunk. A Visit to a Steampunked Home.

If you dropped by my house you'd probably be disappointed. Technology - Steampunk - How to Make Instructables. Arthrobots - Original steampunk insect sculptures by Tom Hardwidge. Steampunk. Miss Betsy's Steampunk Monitor. If you visit the google library in these days, the librarian will find plenty of articles and depictions of so called "Steampunk Monitors". In my imagination though, I envisioned the creation of a device that could show static but also moving pictures generated by means of computation and modulation of waves generated by my ingenious new invention.... Steampunk Sewing Patterns. What is Steampunk? S P O O K Y P O P : The art of Doktor A. Retro-Futuristic Steampunk Loft Apartment In New York. Steaming Apparel - Introduction to Simple Steampunk Costuming. The Steampunk Coat « StitchPunk. Steampunk USB Cable.