The Steampunk Empire - The Crossroads of the Aether 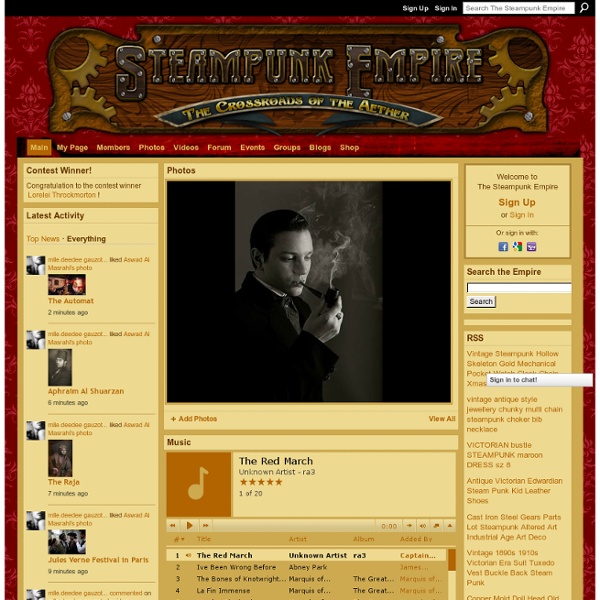 Beyond Victoriana | A Multicultural Perspective on Steampunk Aliette de Bodard » Blog Archive » Aztec steampunk So, I’ve recently noticed I started writing Aztec steampunk (“Memories in Bronze, Feathers and Blood”, up at Beneath Ceaseless Skies, “Age of Miracles, Age of Wonders” forthcoming in Interzone, and “Prayers of Forges and Furnaces”, which I haven’t sold yet). I’ve had several people mentioning how it’s a bit odd to be mixing Aztecs with the steampunk aesthetic, and that set me wondering about where I was coming from when I was writing that kind of stuff. Insofar as I can express it, it goes like this. Those steampunk stories I’ve read (and I’ll say right here and now that I haven’t read that many of them and don’t consider myself a steampunk expert, not by a large margin) derive a strong appeal as sensaofwunda stories with a retro feel: you have goggles and all sort of tech from dirigibles to odd-shaped machines involving steam and brass; there are explorers and archaelogists, wealthy spinsters and anarchists, mechanical men and proto-computers. I’m not criticising.

Steam Garden: Tokyo, Japan steampunk party at Christon Cafe Shinjuku. Japanese cosplay fashion event. | LA CARMINA. Japanese Street Fashion The concept of Steampunk is only beginning to gain recognition in Japan, even though there have been many works that incorporate the aesthetic, such as Katsuhiro Otomo’s anime film Steamboy. My Tokyo-based friends Kenny Creation and Luke Chaos have been passionate about Steampunk for some time, and last year, they founded the event Steam Garden. (Photo above by Aki Saito) On March 10th, I went to their fourth event, themed “Celtic Fantasy.” Each event has a different theme, revolving around a past era. This time, the code word was Celtic Fantasy. Kenny Creation DJ-ed possibly the most original set I’ve ever heard… it was exclusively bagpipe music! In between sets, there were mesmerizing performances by motion capture and stunt performer Kaori Kawabuchi (Final Fantasy 13), live music on a variety of period instruments from medieval group Homonculus… … steamcore music and tribal fire dance from Chaos Royale VS Lyon. With the dapper “philosopher” of Steam Garden, Luke. And Japanese Lolitas.

queering steampunk UPDATED: Donate now at to get this off the ground! One of the really wonderful things about Steampunk is that it, more than any other sub-culture, seems to want to teach us things. I have always been very interested in the technology of the 19th Century, it's been a passion since a very young age. this passion is certainly part of what got me interested in Steampunk in the first place. However, as I delved deeper into the history of technology I got really interested in other aspects of how the world changed during the Industrial Revolution. In particular I became interested in the Women's Movement, which began in the late 19th century, feminism, and gender theory. Chasing down this rabbit hole has lead me to books like Marilyn French's Beyond Power, which is currently blowing my mind and has the feel of one of those books that forever changes to way you view the world. And that brings me to the subject of today's post. Cheers! Jake.

vaporpunko First, introductions via Wikipedia & Vikipedio. While I have encountered manifestations of what is now called Steampunk, the term--the named genre--is new to me. Back in the 1960s I watched the TV series The Wild Wild West, an obvious precursor or example of the genre. (And, a few days ago, I made it halfway through the ineptly executed film The League of Extraordinary Gentlemen.) I wrote about the increasing profile of self-referential cultural artifacts in a 1993 essay: Cultural Sophistication and Self-Reference on American Television: Seeds of Hope? Owing to the acceleration of social and cultural change, it becomes obvious how drastically basic social assumptions are different now than from decades past, which has long been a device pursued by TV series, most recently the runaway hit Mad Men. I have already blogged about Andrew Drummond's novel A Hand-Book of Volapük, which is in the neighborhood of steampunk, a genre admired by Drummond.

steampunk defended In my opinion, Stross has at least one valid point, one that doesn't go away by just declaring steampunk to be "cool", like Westerfeld did, or stressing the utopian qualities of the 19th century, like Valtat: It is easily forgotten today that the genre's origins, at least when seen in direct relation to cyberpunk, are dystopian, not utopian, in nature. Steampunk shows a 19th century spun out of control, full of dangerous, unbound technological possibilities and sociological changes that indeed had lots in common with the postmodern worlds of William Gibson, Bruce Sterling and the like. Just like the cyberpunks, authors like Oscar Wilde and Joris-Karl Huysmans turned the old values upside down, declaring technology superior to nature, the illusion preferable to the real. However, the heroes of cyberpunk didn't stop there. Sometimes, steampunk still remembers this. But sometimes, there's just too much coolness.

the big switchback Actually I don;t see it as a straight choice between looking back or looking forward. For me its about tempering the lust for novelty and not assuming that knowledge becomes obsolete in a few years. Not that I'm advocating a reactionary and conservative attitude, quite the reverse, but I do think that real innovation is based on a depth of knowledge of what people have already done, rather than the conceit that novelty is automatically progress. In practical terms I think that we have to be careful of losing skills which have taken centuries to develop just because they aren't fashionable anymore or because they take effort to acquire. For any society to be sustainable it must be capable of generating wealth, which is not by any means the same thins as making money.

why steampunk will last I would like to take a moment to define “steampunk.” This will be an exercise in futility (not to mention sadomasochism) because there is no formal, all-encompassing, final word on the subject, and people are bound to disagree. But for the purposes of what is to follow, I must begin with a definition of this term which I’m going to be flinging around willy-nilly. So here goes. Steampunk: An aesthetic movement based around the science fiction of a future that never happened. WooEEE. It is lots of fun. Let the emails beginning, “Actually …” and “Technically …” and “But you’re forgetting …” begin! And click the jump below in order to keep reading. Why I got interested in steampunk: I first became interested in steampunk about four or five years ago, when I stumbled across a message board dedicated to the subject. My only tiny gripe was that most of the steampunk art and fiction I was seeing appeared to be centered around Victorian London. So I still had a book under contract. (1). (2).

steampunk capital of the world The humble farming town of Oamaru, three hours south of Christchurch on New Zealand’s South Island, used to be known for its population of blue penguins and having the best-preserved collection of Victorian architecture in the country. But that was before it became the world’s unlikely capital of steampunk, drawing enthusiasts from around to globe to what was once an economically depressed rural service centre wedged between the Kakanui mountain range and the Pacific Ocean. Earlier this month Oamaru made it into the Guinness Book of World Records for the largest gathering of steampunks in the world. For the uninitiated, the term steampunk was coined in the 1980s and is based on imagining inventions the Victorians might have created for the modern world. Iain Clark, who is widely credited with launching steampunk in Oamaru and likes to be known by the name Agent Darling, said the movement began to take hold in 2010. But despite the early resistance, the movement grew.

"It does seem that the SP forums have gone quieter mostly since the moderator of SteamPunk Empire abandoned that popular site." (5/17) by graywyvern Jan 26