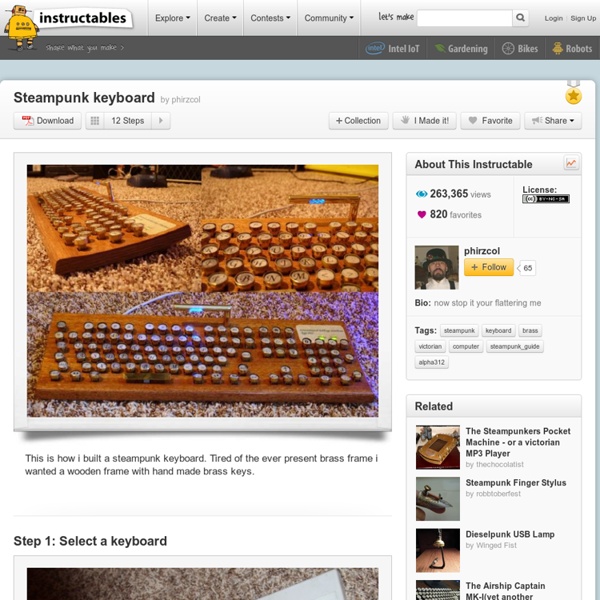 This is how i built a steampunk keyboard. Tired of the ever present brass frame i wanted a wooden frame with hand made brass keys. Step 1: Select a keyboard Select a keyboard that will allow you to wrap the wood in one axis. More than one axis will complicate the process to an unbelievable level. Remove the top of the keyboard and all of the keys .

DIY Steampunk Gauges If you're building steampunk props for cosplay, gauges are a must-have. Unfortunately, vintage gauges (which look the most authentic) can be both hard to find and pretty darn expensive once you do track them down. So, John and I decided to make our own. Here's the secret: These cup slider handles for closet doors are perfect for DIY gauges. Plus, a pack of two handles only costs two or three dollars - sweet!

7 Free Wooden Gear Clock Plans for You Eccentric, Masochist Woodworkers Ever since I had the pleasure of seeing Keith Chamber’s wooden gear clocks in person, I’ve been on the look out for more all wood clocks. See Wooden Gear Clocks by Keith Chambers >> I think wooden clocks are one of those dividing lines in woodworking… To have the aspiration to make a clock, entirely from wood, puts you in your own unique category. One well-known seller of wooden clock plans, Clayton Boyer, pitches his most-difficult plans like this: “Selling plans for the clocks on this page goes against my basic philosophy of trying to spread joy in the world through creative woodworking. However, I have come to the conclusion that I should not stand in the way of a woodworker’s desire for additional frustration in his/her life when they obviously want it so badly.”

Steampunk Leather Top Hat Tutorial I have received several requests for a tutorial on making my steampunk leather top hat, shown above, and so, here it is. The first drawing shows the three pattern pieces (not to scale). The wave on the bottom of the crown is what gives the brim its distinctive curve. The pattern below is the one that I used to make my top hat. For a size large, the width of the crown (from side to side) should measure 23.8". Tutorials Geekery, Girliness, & Goofing Off Search Bar HTML Pages Crafts Home How I Made My Liquid-Cooled Steampunk Rifle Prop Steamdown: How I Made My Liquid-Cooled Steampunk Rifle Prop I know, "Steamdown" conjures images of a hoedown, but "Steampunk prop breakdown" is a bit of a mouthful, I thought. Anyway, I'm going to show you how I made my very first Steampunk prop! It doesn't require any tools at all, just some glue and some parts from the hardware store. Oh, and a screwdriver for one screw.

Free Patterns Menu: Period Clothing Patterns and Cutting Diagrams - The Ladies Treasury of Costume and Fashion Period Clothing Patterns and Cutting Diagrams IMPORTANT: Notes On Using Our Patterns These patterns are reproduced from original period patterns and from cutting diagrams found in English, French and American publications of the 19th and early 20th centuries. Those copied from full-sized patterns were scanned in at 1/2, 1/4 or 1/8 of the original size as indicated on each piece. They can be printed out and enlarged on a photocopier, projector, digitally, or by hand. The scale in inches is also given on each piece, in case they do not print out true to size.

How to Build a Crystal Radio The Complete Guide on How to Build a Crystal Radio—Plus How They Work There's a lot that goes into making a nice crystal radio set, so this is going to have to be broken down into two parts. The first part is the actual making of a functional radio, and the second part is making the whole arrangement look nice. In this part, I'm actually going to tell you more than just how to make a crystal radio, but I'm also going to explain how and why they work. Crystal radios are pretty Steampunk in and of themselves, since they were first developed in the late 19th century. How to Make Steampunk Jewelry Wikipedia defines Steampunk as “a subgenre of fantasy and speculative fiction that came into prominence in the 1980s and early 1990s. The term denotes works set in an era or world where steam power is still widely used-usually the 19th century, and often set in Victorian era England-but with prominent elements of either science fiction or fantasy, such as fictional technological inventions like those found in the works of H. G.

Steampunk Jewelry Made Simple May 19, 2011 by suzannelazear Today we welcome Brenda Sue of B’sue Boutiques who’s jewelry supply store not only has everything you need to make neat Steampunk jewelry, but she also has loads of instructional videos for people like me who love to make things, but in all honesty can’t craft their way out of a cardboard box. STEAMPUNK JEWELRY MADE SIMPLE: Breaking It Down to Cogs and Gears By B’Sue Love the Steampunk lifestyle? Well as this blog has aptly demonstrated, you need the right glad (or perhaps ‘mad’) rags for your look! Flashes of Style Lately I have been.... 1.) Running around town (appointments in SoHo in particular) in COATS! 2.) Sunday family breakfasts made by Christina. Steampunk The ultra technological world born from hackers & maker culture has helped inspire a Jules Verne themed steampunk bazaar full of brass computer accoutrements, leather fly-boy goggles, and ray-guns made from candle holders that should help equip you well enough to fight off an attack from a wayward Eastern Block airship, a corset wearing phantasm from yesteryear, or just your everyday future warriors who refuse to acknowledge that an imaginary life in the past is better than living in the reality of today, or dare I say, the curious gaze of tomorrow. The retro futuristic world of steampunk is thriving on Instructables, and with this guide, it can thrive in your life too. By request: My take on goggles.Often times after piloting my steam dirigible, I arrive at my destination only to find my eyelashes and eyebrows have collected a mass of gnats, fleas, and small birds. ... Well lets put it this way, ive always had this thing about traveling through time, and having a time machine.

The Dapper Bun: DIY Style: How To Make A Birdcage Veil Back in 2008, I wanted to make a birdcage veil but had trouble finding a tutorial online with clear instructions. I experimented around, came up with this, and decided to document the process with pictures and instructions. Now, there's tons of them on the web and many link back to my original tutorial on my craft blog, but I wanted to repost onto this blog in case any readers were interested (these pics are from when I had short blonde hair!).So here, I will list out my step by step instructions on how I made the birdcage veil.

12 Steampunk Gadgets and Designs Steampunk is a sub-genre of fantasy and speculative fiction set in an era or world where steam power is still widely used. This post showcases creative gadgets and designs styled in a steampunk fashion. Steampunk PS3 Beautiful steampunk styled Playstation 3 mod created from old radio valve, a pipe valve, a pressure gauge, and assorted plumbing parts. How to Make a Steampunk Utility Belt Steampunk utility belt: the place to carry your Tools of Awesome–or to just hang onto some spare change. Whatevs. No matter what you choose to store, you’re gonna look STEAMPUNK-TASTIC wearing it.