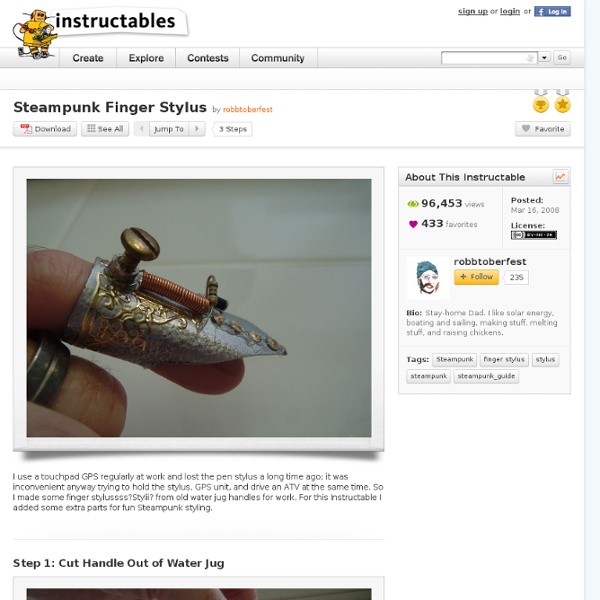 I use a touchpad GPS regularly at work and lost the pen stylus a long time ago; it was inconvenient anyway trying to hold the stylus, GPS unit, and drive an ATV at the same time. So I made some finger stylussss?Stylii? from old water jug handles for work. For this Instructable I added some extra parts for fun Steampunk styling. Step 1: Cut Handle Out of Water Jug This is simple, just cut out a small section from the handle of the jug. Step 2: Plain Stylus Finish Briefly hold the tip of the stylus in a flame to round it and keep it from being scratchy. Step 3: Paint and Hot Glue Extra Stuff Getting a sense of Steampunk style takes a little intuition and internet browsing for ideas. Related:  steampunk

How to make STEAMPUNK jewelry Wikipedia defines Steampunk as “a subgenre of fantasy and speculative fiction that came into prominence in the 1980s and early 1990s. The term denotes works set in an era or world where steam power is still widely used-usually the 19th century, and often set in Victorian era England-but with prominent elements of either science fiction or fantasy, such as fictional technological inventions like those found in the works of H. G. Wells and Jules Verne, or real technological developments like the computer occurring at an earlier date. Other examples of steampunk contain alternate history-style presentations of “the path not taken” of such technology as dirigibles or analog computers; these frequently are presented in an idealized light, or a presumption of functionality. Steampunk is often associated with cyberpunk and shares a similar fanbase and theme of rebellion, but developed as a separate movement (though both have considerable influence on each other).

DIY Steampunk Resin & Leather Cuff Here's another resin experiment I've been meaning to show you guys, since it's the one I actually wear the most so far of all my experiments. I whipped it up last month, I think, and it immediately become one of my top three favorite cuff bracelets. (I am a huge fan of leather cuffs; they're perfect with jeans, and they don't snag or pinch the way most of my chain bracelets do!) The centerpiece of the cuff is a vintage ray gun charm from a box of Cracker Jacks. After this was taken I removed the loop, painted the gun silver (it was initially gold) and aged it with a little brown paint. Next I dropped it into my resin mold along with several tiny watch gears: Once the resin was cured, I tried two or three different metallic papers for backers: I loved the silver foil, but was afraid it'd look a little too Buck Rogers. From here I grabbed an old leather belt, cut off a section, and began laying out my cuff design: (I later swapped this chain for a more delicate gold one.)

Cheap and Easy to make Steampunk Keyboard After looking at some of the fancy retro keyboards at Datamancer's Site and the nice tutorial over at the Steampunk Workshop, I really wanted to make one myself. Unfortunately, I lack the tools/space and money to get and cut brass, and I'm not confidant enough to do so with any other metal. Also, I did not like the idea of spending $60+ for two sets of old typewriter keys. It was at this point that I found stickers of old typewriter keys and realized another way I could make my keyboard "look" like it had old typewriter keys Thus I present a way to make a steampunk/typewriter looking keyboard for under $50 that the average person can easily make him/herself Tools Used: Screw Driver - both Philips and flat head will most likely be needed Dremel Tool - with plastic cutting blade Pliers - Needle nose work best for the finer cutting Small saw for cutting the scrap wood Materials Used: A Keyboard - DUH!

Miss Betsy's Steampunk Monitor If you visit the google library in these days, the librarian will find plenty of articles and depictions of so called "Steampunk Monitors". In my imagination though, I envisioned the creation of a device that could show static but also moving pictures generated by means of computation and modulation of waves generated by my ingenious new invention.... (Any resemblance to devices used in "City of Lost Children" is purely coincidental). I also wanted to add "loudspeakers" (E. Siemens et al.) to the device to present an even more pleasurable experience. The device will be able to reproduce sound and static/moving pictures and will be powered by another invention of mine , based on the works of my fellow researchers Nikola Tesla, using hyper-condensed steam applied to a turbine by the same name, Count Alessandro Giuseppe Antonio Anastasio Volta and Michail Osipovich Dolivo-Dobrovolsky, able to produce alternating current in the amount of 110 Volts.

Miss Betsy's Steampunk Keyboard The steampunk fever finally got to me and I had to build my version of a steampunk keyboard. By now, you can find quite some pictures and "How-To's" about steampunk keyboards out there and of course each single one inspired me, if only maybe, with a little detail. So what is new then you might ask. Probably some choices of materials for some of the parts, the one or other manufacturing step and the installation of an USB illumination. Maybe you want to look just at more pictures and find a little detail that you didn't see mentioned anywhere else and inspires you... I spent quite some time pondering about the choice of new keys. Please vote by clicking the stars on the right side! Please check my Steampunk Mouse too. Helpful: A good friend who is willing to help and has all the tools you don't have. (Pictures were not always taken in the order as they are arranged in the steps)

fairy Steampunk Lego It's not hard to work out why Steampunks like lego so much.. we're tinkerers! For my part, lego always held a special appeal - not only is it a really fun toy to play with, but for me it also held the allure of THE FORBIDDEN! See, my mother had decreed that lego was "a boy's toy" and therefore, not being of the boy-type-child, I was not allowed to play with it.. ..of course this meant I played with it every chance I got. It's clear that my love of lego is shared by many steampunks! Brilliant! Some really outstanding stuff from Guy Himber who rightfully won prizes at the lego convention, Brickcon. Voyage to the Moon was honored with the 1st place for ART at BrickCon 09 VICTORIA Steam Carriage KENSINGTON Pipe Organ TESLA Man/Machine HMS VERN Underwater Boat Henry-8 Trilobite HMS Shelman Queens Regal Institute of Protection SteamViper HMS Moondreams Steamgate Battle In the Skies HMS Brown Widow HMS Black Widow The Steam Squad Flickr: The Lego Steampunk Pool

Steampunk Mouse I had a few tools, a nice basement to work in and being kind of a packrat should help too. Not to forget a good friend with a full equipped workshop who would help me if everything else would fail. Unfortunately I didn't have any old mice laying around so I ordered two cheap ones ($5) from the Internet just in case I ruined one..... Tools used: My beloved Craftsman mini drill with all kinds of attachments Set of screwdrivers Set of sandpaper 120 - 600 Hand-me-down drill press Vise Soldering iron Assorted pliers (needle nose almost a must) Metal files Hack and coping saw Propane torch Costs, depending on what you have $20-40 Of course I made several trips to my nearest hardware store and hobby shop and acquired necessary materials and also tools I was missing; that always happens when I tackle a new project ... Pictures are not always in chronological order, rather to show certain steps in fabricating the mouse.

Copper Plating & Etching Altoids Tins UPDATE: There's some great information on this page and it's comments, but I've recently published a far more comprehensive article here: Etching Tins with Salt Water and Electricity With this project I wanted to try a number of new things: Magazine pages as cheap toner transfer mediaCopper electroplatingEtching Altoid tins with a salt water solution The copper plating met with mixed success, but the other two methods resulted in some nice pieces. Note: blue vitriol and muriatic acid are archaic names for copper sulfate and hydrochloric acid. Magazine pages for toner transfer: While looking for information on transferring toner using a fuser assembly from an old laser printer I ran across several websites where people suggested using glossy magazine pages for transferring printed circuit board images to a copper substrate. Preparing the Altoids tins turned out to be harder then I predicted. Next we: Copper Plating Altoids Tins: From the picture below, this appears to work. Foom!

steampunk fashion - getting started with steampunk jewelry-makin So I have this box of copper findings that I've had for years. It was given to me by a woman who used them to make stained-glass. I don't know what their original purpose was but they look antique. I've always thought that I'll use them to make jewelry but never quite figured out exactly how. Some of the pieces look sorta steampunkish and I was thinking about drilling small holes in them and attempting to make some necklaces, brooches, medals, etc. How does one get started with steampunk jewelry-making? Too bad the wings are facing the same direction: This is my favorite piece: I have a whole box full of these treasures:

What is Steampunk? | Steampunk.com This is a good question that is difficult to answer. To me, Steampunk has always been first and foremost a literary genre, or least a subgenre of science fiction and fantasy that includes social or technological aspects of the 19th century (the steam) usually with some deconstruction of, reimagining of, or rebellion against parts of it (the punk). Unfortunately, it is a poorly defined subgenre, with plenty of disagreement about what is and is not included. Take place in the Victorian era but include advanced machines based on 19th century technology (e.g. “It’s sort of Victorian-industrial, but with more whimsy and fewer orphans.”- Caitlin Kittredge There are probably plenty of other combinations I’ve forgotten, but that’s steampunk as a genre in a nutshell. And it isn’t just written fiction anymore. “To me, itâ€™s essentially the intersection of technology and romance.” – Jake von Slatt But steampunk has become a lot more. So, steampunk is a genre and a design aesthetic.