The Global Communications Service Provider for the Internet of Things (IoT) 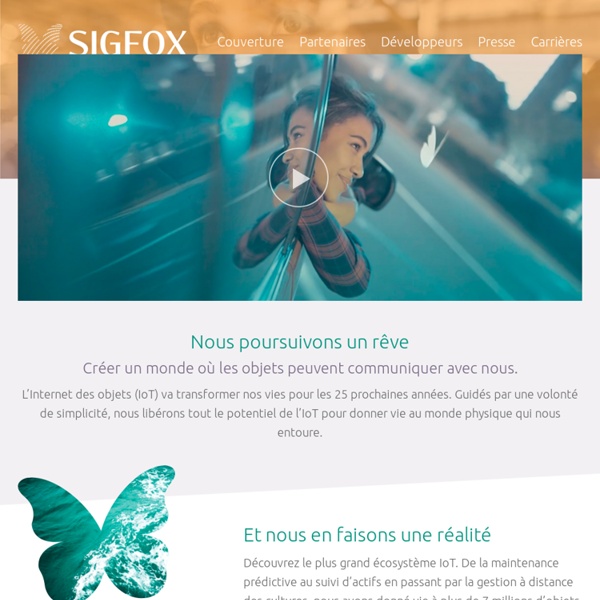 The Most Innovative UX Of The Year, In 18 Projects What's the recipe for a great product? That's the billion dollar question that designers may spend their whole lives chasing. And the most nebulous ingredient, user experience, is also the most important. Another word for snow. Background Over the last few weeks I’ve been experimenting with the Dallas 1-wire system for sensors around the house/garden. Although I originally thought of using Arduino/JeeNodes I couldn’t make the figures work. 1-wire may not be wireless, but it’s inexpensive, simple and robust. Basically, you need a run of 2/3-core wire with sensors on it where you need them: most people seem to use phone cable and RJ12 connectors.

Wavenis Wavenis Wireless Technology is a 2-way Wireless connectivity platform dedicated to serving M2M applications. The main requirements in today's data-centric M2M industry are quite different from broadband and hi-speed Internet connections, and generally focus on providing ways to transmit small amounts of data wirelessly on a regular but non-permanent basis. Many M2M solutions are installed in places where access to electricity is not an option, so ultra-low-power consumption is a key feature for wireless M2M technologies, often with a requirement to provide multi-year operation in battery-powered devices such as utility meters and social alarms. Furthermore, a high link budget is required to provide acceptably long-range connections in a variety of dense urban environments as well as widespread rural areas.

G-cluster Global Corporation Erik PiehlRepresentative Director & PresidentG-cluster Global Corporation Effective: January 1, 2008 We recognize that your personal information is a valuable asset, and ensure that our employees and executive staff will protect your personal information by appropriately and safely handling the information provided by you, and abiding by the compliance program for the protection of personal information. 1. Collection, Use, and Disclosure of Personal Information Bathymetry Data Viewer - NOAA ●Contact Us Navigating the map Click and drag or use arrow keys to pan Mouse scroll forward or use + key to zoom in Mouse scroll backward or use - key to zoom out Identifying features You have several options to identify features within visible layers: Single-click on the map Or, choose another tool from the "Identify" menu: Click on to draw a rectangle Click on to draw a polygon Click on to enter coordinates for a bounding box A popup will appear with a list of the selected features. Mouse-over the list of files within an instrument folder to highlight features on the map (blue line). Click the magnifying glass icon

Stop-Motion Movie Creator Direct, Record, and Edit Your Own Minecraft Stop-Motion Movies! The Minecraft Stop-Motion Movie Creator app makes it easy to produce your own stop-motion movies starring your favorite Minecraft Mini-Figures. In just a few simple steps, you’ll be bringing Steve, Creepers and other Minecraft characters to life! A new OSS PHP MQTT Client Library – phpMQTT 10 Sep 2010 It seems finally we may be freed from the unstable shakiness which is embodied in PHP_SAM - the only PHP based MQTT client....until now. Project SAM is a PHP library for several different pubsub messaging systems, one being MQTT. However it suffers from a very restrictive licence, a lack of maintenance and quite a few bugs.

DASH7 International standard[edit] DASH7 is based on the ISO/IEC 18000-7 open standard for the license-free 433 MHz ISM band air interface for wireless communications. 433 MHz is available for use worldwide, except certain countries where it is considered a restricted or licensed band such as India and Japan. The wireless networking technology was originally created for military use and has been re-purposed for mainly commercial applications in place of proprietary protocols like ZigBee or Z-Wave. History[edit] In March 2009, the DASH7 Alliance, a non-profit industry consortium to promote interoperability among DASH7-compliant devices, was announced, and as of July 2010 has more than fifty participants in twenty-three countries. Similar to what the WiFi Alliance does for IEEE 802.11, the the DASH7 Alliance is doing for the ISO 18000-7 standard for wireless sensor networking.

Steven Spielberg and George Lucas predict ‘massive implosion’ in film industry George Lucas and Steven Spielberg think the film industry is heading towards a cliff. The pair behind some of the most successful franchises in movie history think that conservative programming choices and rapidly evolving distribution schemes have set the stage for a massive upheaval — and internet-based services may become the dominant medium when moviegoing as we know it crashes and burns. The duo were joined during a panel at the University of Southern California by Microsoft's president of interactive entertainment Don Mattrick, who played backup with the occasional Xbox reference as Lucas and Spielberg took center stage.

CarryMap Do you need to share your ArcGIS project or parts of this project with colleagues or customers that don't have ArcGIS software?Do you need to share your geodata securely - so that no one could modify or extract it from the file that you provide? CarryMap is a unique solution for reproducing your ArcGIS maps as self sufficient distributable electronic map applications for desktop computers, Windows mobile, Apple iOS, and Android devices (CarryMap application for iOS and Android devices is available at App Store and Google Play Market, respectively). With CarryMap you get the professional production tool for making spatially enabled guides, exploration plans, field work maps, recreation and attraction plans for navigation and information support purposes.

fastcoexist If you dial 112 in Stockholm—the European equivalent of 911—and report a heart attack victim, it won't take long for an ambulance to show up. But a volunteer might to get there first. A new app uses GPS to ping anyone from a network of thousands of CPR-trained "lifesavers" who happens to be in the neighborhood.

Internet enabled interactive stair lights Ok, So this has been done before, i know. There are even a few instructables already on how to make stair lights. Mine are a bit different. You see, I'm starting off on a 'Home Automation spree' and this is one of the elements in my house. This enables web/network based control over the stairs. All you need to do is 'publish' the settings and the Arduino will act accordingly.

Identify RF Remote Control Overview - Typical RF Remote Control PCB Layout A typical RF remote control's PCB is comprised of many electronic components, such as SAW resonator which controls the transmitting frequency and encoder IC which encodes the transmitting data. The typical inner photo of RF remote control is listed as follows. Identify Operating Frequency Academic libraries and publishers: Working together in support of the creation and dissemination of new research knowledge and innovation Last month, we were delighted to host an event for our founder, Sara Miller McCune, to honour the academic library community. We had invited librarians, academics and senior university representatives from the UK and beyond to join us in celebrating the academic library, and to consider its future. The reception came at the end of a day of themed meetings for SAGE: a committee meeting of our library advisory board, a key group that supports SAGE in guiding our understanding of the changing library environment; and a round table discussion on the future of libraries in an Open Access landscape, hosted jointly with the British Library. Events like this are key in enabling strong communication between libraries and SAGE, to ensure that we continue to provide the support and services needed.