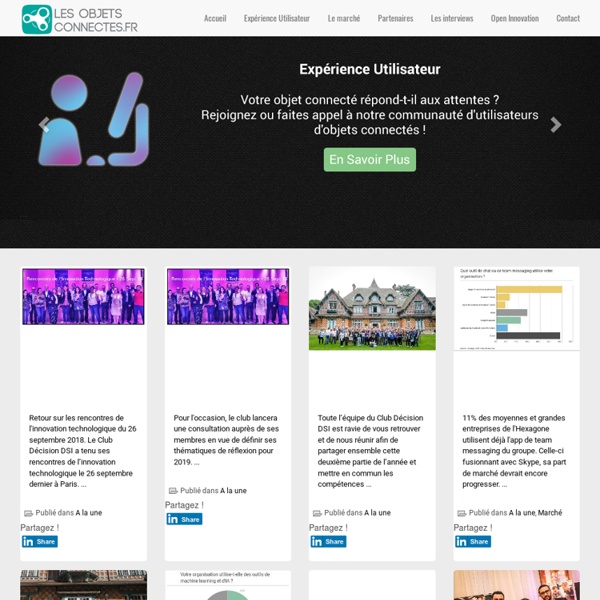 This Android Wear App Lets You Control Your PC With Your Watch If you’ve ever felt too lazy to reach for the mouse and keyboard, you can now use an Android Wear smartwatch to control your PC instead. The latest version of Unified Remote includes Android Wear support, letting you manipulate your PC’s cursor from your wrist and use voice commands to control specific programs and websites. The Android Wear features require the full version of Unified Remote, which is a $4 upgrade from the basic free version. But as futuristic as wrist-worn PC controls seem, keep in mind that the software still needs some serious polish. Why this matters: Jokes about laziness aside, controlling a computer by smartwatch could be make a lot of sense for home theater PC setups, where touch-based smartphone controls are already quite useful.

Art and the Internet of Things Wireless is increasingly pulling in all kinds of applications, platforms, services and things (rfid) into networks. Many people communicate through mobiles, blackberries, digital organizers, palmtops. Cars become information spaces with navigational systems and consoles like Nintendo DS have wireless capacities and get linux kernels installed.We are witnessing a move towards pervasive computing and disappearing technologies in intelligent clothing (wearables), smart environments (knowing where and who we are), pervasive games, and we will see doors opening for some and closing to others. Mimickry and camouflage will become part of application design. Ipods and Iphones will show colors and produce sounds corresponding with your surroundings.

Internet of Things - A game changer For many we have accessed content, collaborated, and communicated from our desktop computers. Naturally, we were followed closely by the IT department. But that’s all changed now. Now we access applications from anywhere on any of our devices. Internet of Things The Internet of Things (IoT) is the network of physical objects or "things" embedded with electronics, software, sensors and connectivity to enable it to achieve greater value and service by exchanging data with the manufacturer, operator and/or other connected devices. Each thing is uniquely identifiable through its embedded computing system but is able to interoperate within the existing Internet infrastructure. The term “Internet of Things” was first documented by a British visionary, Kevin Ashton, in 1999.[1] Typically, IoT is expected to offer advanced connectivity of devices, systems, and services that goes beyond machine-to-machine communications (M2M) and covers a variety of protocols, domains, and applications.[2] The interconnection of these embedded devices (including smart objects), is expected to usher in automation in nearly all fields, while also enabling advanced applications like a Smart Grid.[3] Early history[edit]

Radio-frequency identification Radio-frequency identification (RFID) is the wireless use of electromagnetic fields to transfer data, for the purposes of automatically identifying and tracking tags attached to objects. The tags contain electronically stored information. Some tags are powered by electromagnetic induction from magnetic fields produced near the reader. Some types collect energy from the interrogating radio waves and act as a passive transponder. Other types have a local power source such as a battery and may operate at hundreds of meters from the reader. Unlike a barcode, the tag does not necessarily need to be within line of sight of the reader and may be embedded in the tracked object.

International Workshop on the Web of Things (WoT) The Internet of Things has become a well-known brand for a set of research issues in the pervasive and ubiquitous computing communities. The WoT workshop series is the prime location for researchers and practitioners to share their results and projects with the Web of Things community. Can’t make it to the workshop?

Smart Citizen Kit The Smart Citizen Project Welcome! The Smart Citizen Project is a collaborative, international effort to deploy a distributed network of citizen-collected data, with the goal of monitoring the environment around us. 41xx Development Kit RTX41xx Development Kit The RTX41xx DVK (Development Kit) offers a comprehensive way of evaluating the performance and features as well as development of custom code to target onto the RTX41xx 802.11 b/g/n low power module. The kit consists of: 1 Wireless Sensor Application Board with a mounted RTX41xx module 1 Docking Station for WSAB (Wireless Sensor Application Board) 1 USB cable (power + download) Software (toolchain & CoLA) Demo Applications as source Batteries

Web of Things The Web of Things (or WoT) is a concept and a set of blueprints to make every-day physical objects first class citizens of the World Wide Web by giving them an API, thus greatly facilitating the creation of their virtual profiles as well as their integration and reuse in all kinds of applications. The Web of Things is primarily an evolution of the Internet of Things where the primary concern has been how to connect objects together at the network layer: simiarly to the way the Internet addressed the lower-level connectivity of computers (layers 3-4 of the OSI model), the Internet of Things is primarily focusing on using various technologies such as RFID, Zigbee, Bluetooth or 6LoWPAN. On the other hand, just like what the Web is to the Internet, the Web of Things regroups research and industrial initiatives looking into building an application layer for physical objects to foster their reusability and integration into innovative 3rd party applications. Technical characteristics[edit]