Orcas Island Chamber of Commerce. Farming on Orcas Island has a rich and bountiful history. 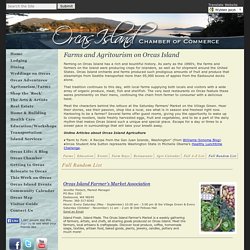 As early as the 1890’s, the farms and farmers on the island were producing crops for islanders, as well as for shipment around the United States. Orcas Island orchards and farms produced such prodigious amounts of fruit and produce that steamships from Seattle transported more than 95,000 boxes of apples from the Eastsound docks alone. That tradition continues to this day, with local farms supplying both locals and visitors with a wide array of organic produce, meat, fish and shellfish. The very best restaurants on Orcas feature these wares prominently on their menu, continuing the chain from farmer to consumer with a delicious twist.Meet the characters behind the lettuce at the Saturday Farmers’ Market on the Village Green.

Research on Conflict Friendship Intimacy: Couples Retreats: Relationships Marriage: Gottman. Conflict | Friendship and Positivity | Shared Meaning Research Findings about Conflict The question of how the masters are different from the disasters of relationship has guided our research. 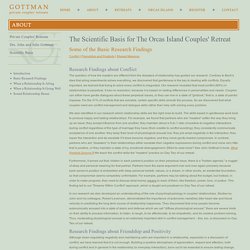 Contrary to Bach's idea that airing resentments solves everything, we discovered that gentleness is the key to dealing with conflicts. Equally important, we learned that trying to solve every conflict is misguided. Our research revealed that most conflict (69%) in relationships is perpetual. We also identified in our research which relationship skills are the right ones to build. A personal exploration of Wiccan spirituality. Saving money can be pretty hard, especially if you need to actually hold physical cash in order to manage it. 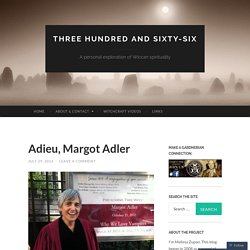 Personally, I know that unless I have cash in my wallet where I can physically hold on to it, I’m definitely prone to impulse spending–you know that moment of, “Oh yeah, I can totally afford that” even if I can’t tell you my exact bank balance. It’s not an uncommon mental phenomenon, and lots of financial advisers counsel their clients to lead a “cash-only” lifestyle (basically no credit cards, debit cards, or checks) until they have a solid saving habit established. I’m a bit more in favor of learning how to use bank accounts myself, and that was confirmed to me last week when a cash-only friend of mine lost her purse.

Now, this friend has been having such a problem managing her money that she completely closed out her bank account. Luckily, my friend did get her purse back, and all the money was still there. The 50/20/30 budgeting plan. Freedom School Movement – Family & Education. @extensionista: Dedicação. Cancer Prevention: An Ayurvedic Herbal Regenerative Approach. "Cancer cells, lacking oxygen (prana), represent a growth in the body outside the rule of the life-force. 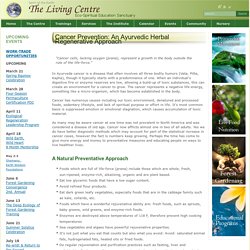 " In Ayurveda cancer is a disease that often involves all three bodily humors (Vata, Pitta, Kapha), though it typically starts with a predominance of one. When an individual's digestive fire or enzyme reserves are low, allowing a build-up of toxic substances, this can create an environment for a cancer to grow. The cancer represents a negative life-energy, something like a micro-organism, which has become established in the body.

Cancer has numerous causes including our toxic environment, denatured and processed foods, sedentary lifestyle, and lack of spiritual purpose or effort in life. It's most common basis is suppressed emotion or emotional stagnation, which causes accumulation of toxic material. As many may be aware cancer at one time was not prevalent in North America and was considered a disease of old age. Hale Pule Ayurveda and Yoga - Hale Pule Ayurveda and Yoga Blog. Airlines - cheap tickets, cheap flights, discount airfare, cheap hotels, cheap car rentals, cheap travel. Volunteer Opportunities for Permaculture in Hawaii. Award-Winning Volunteer and Sabbatical Programs for Skilled Permaculturalists "My time at Kalani for three months was absolutely life changing for me. 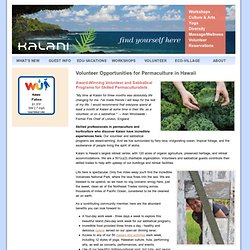 I've made friends I will keep for the rest of my life. I would recommend that everyone spend at least a month at Kalani at some time in their life, as a volunteer, or on a sabbatical. " -- Alan Wroclawski - Former Fire Chief of London, England Skilled professionals in permaculture and horticulture who discover Kalani have incredible experiences here. Our volunteer and sabbatical programs are award-winning. Kalani is Hawaii’s largest retreat center, with 120 acres of organic agriculture, preserved heritage, and retreat accommodations. Life here is spectacular. Camping. Original Unverpackt: el supermercado que declara la guerra al packaging. Tags: ecoembalajeembalaje originaloriginal unpackedOriginal UnverpacktResiduossupermecado La conciencia ecológica de las marcas es algo que a unas les había afectado más y a otras menos. 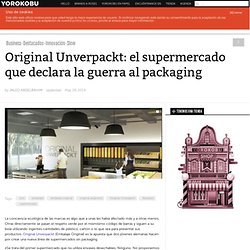