40 Wonders of the World You Didn’t Know Existed. Beauty and wonder come in many forms in our world, from the natural or man-made to the intact or ruined. 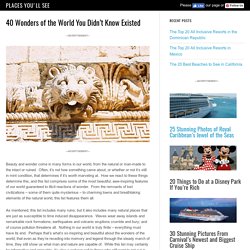 Often, it’s not how something came about, or whether or not it’s still in mint condition, that determines if it’s worth marveling at. How we react to these things determine this, and this list comprises some of the most beautiful, awe-inspiring features of our world guaranteed to illicit reactions of wonder. From the remnants of lost civilizations – some of them quite mysterious – to charming towns and breathtaking elements of the natural world, this list features them all. As mentioned, this list includes many ruins, but it also includes many natural places that are just as susceptible to time induced disappearance.

Waves wear away islands and remarkable rock formations; earthquakes and volcanic eruptions crumble and bury; and of course pollution threatens all.

Most Beautiful Travel Destinations of 2015. There is so much beauty on earth; every sight so different from each other, that selecting the most beautiful destination is next to impossible. 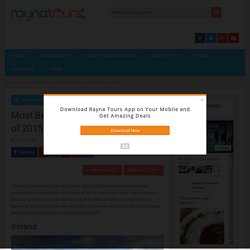 Every new destination gives us an undying urge of seeing more of the Mother Nature. An avid traveler is always on the lookout for a new destination and hence, we bring to you a list of most beautiful travel destinations you must plan in 2015. Ireland. 10 Insanely Gorgeous, Under-the-Radar European Destinations. The value of the dollar against the euro is the highest it's been in years, making now the perfect time to take that trip you've been meaning to plan. 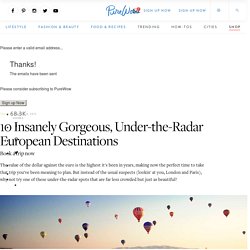 But instead of the usual suspects (lookin' at you, London and Paris), why not try one of these under-the-radar spots that are far less crowded but just as beautiful? Goreme, Turkey The only thing better than seeing Goreme's stunning rock formations (into which enormous, beautiful churches have been built)? Experiencing them from a hot-air balloon, hundreds of feet overhead. Glass Beach - The Dump You'll Want to Visit. Before you say anything about the content of this article, I hate people who litter. 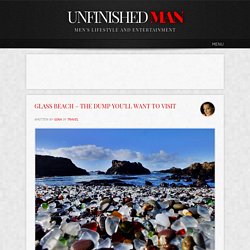 I’ll judge you if I think you’re too lazy to recycle. I hate pollution and the death of our fragile ecosystems and all the rest. 25 Places That Look Not Normal, But Are Actually Real. The 33 most beautiful abandoned places in the World. 52 global tourist attractions that actually live up to the hype. FOR MANY TRAVELERS, once a place gets hit so much it becomes a “tourist attraction,” it loses much of its attraction. 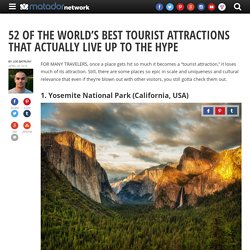 Still, there are some places so epic in scale and uniqueness and cultural relevance that even if they’re blown out with other visitors, you still gotta check them out. 1. Yosemite National Park (California, USA) Famed for its wildlife, granite rock structures, and sequoia trees wider than cars, Yosemite National Park spans over 700,000 acres in Northern California and contains 13 different campgrounds. (via, via) 25 Bars That Are So Cool You'll Want To Experience - 9Thing. We’ve compiled a list of the 25 most epic bars in the world in terms of uniqueness. 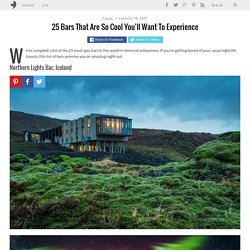 If you’re getting bored of your usual night life haunts, this list of bars promise you an amazing night out. Northern Lights Bar, Iceland This bar in the middle of nowhere offers front row seats to a truly spectacular natural phenomenon. The bar’s massive windows offer incredible views of both the aurora borealis and the moss-covered lava fields. Hotel Edelweiss, Mürren, Switzerland Where better to enjoy haute cuisine and a beer than 6,300 feet above the ground surrounded on all sides by a magnificent mountain panorama formed by 21 peaks at the heart of the Alps. Tiger Leaping Gorge Bar, China. 50 Unpredictable And Non-Clichéd Places To Travel To In Your 20s. There are certain destinations we all dream of traveling to one day: Paris, Rome, Bangkok, Rio de Janeiro, Jerusalem, Tokyo, New York City, Buenos Aires, Beijing, Stockholm. 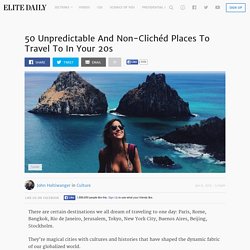 They’re magical cities with cultures and histories that have shaped the dynamic fabric of our globalized world. Travel snobs will tell you these places are so inundated with tourists that you won’t really enjoy visiting them. These individuals have lost sight of how privileged they are to travel in the first place. Regardless of how crowded these places may be, there’s nothing quite like staring up at the ceiling of the Sistine Chapel, emerging from the NYC subway for the first time and staring down at the streets of Paris from the top of the Eiffel Tower. 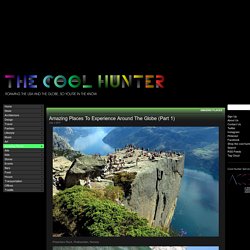 10 Places to Go Before They're Gone. 8931 803Share23.3K Nothing lasts forever, so you might want to get out there and explore while you still can. 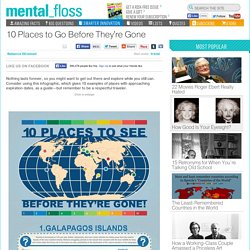 Consider using this infographic, which gives 10 examples of places with approaching expiration dates, as a guide—but remember to be a respectful traveler. Click to enlarge via DailyInfographic.com and PinayTraveller.com. Vik Iceland - Avenly Lane. After taking a red eye flight from Orlando to Iceland we arrived around 5am. 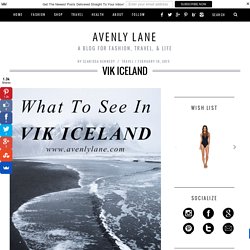 We rented a car and headed straight for Vik. (3 hour drive from Reykjavik) Just on our first day from Reykjavik to Vik, we saw Seljalandsfoss and Skógafoss waterfalls (and many more from the road… and many more in the days to come). The views were truly unlike anything I had ever seen before. I don’t know what I expected Iceland to be like, but it was so much better. We arrived in the small village of Vík around sunrise. Vik is Iceland’s southernmost village and faces the open Atlantic Ocean, framed by a long black volcanic sand beach.