Here's Everyone Who's Immigrated to the U.S. Since 1820 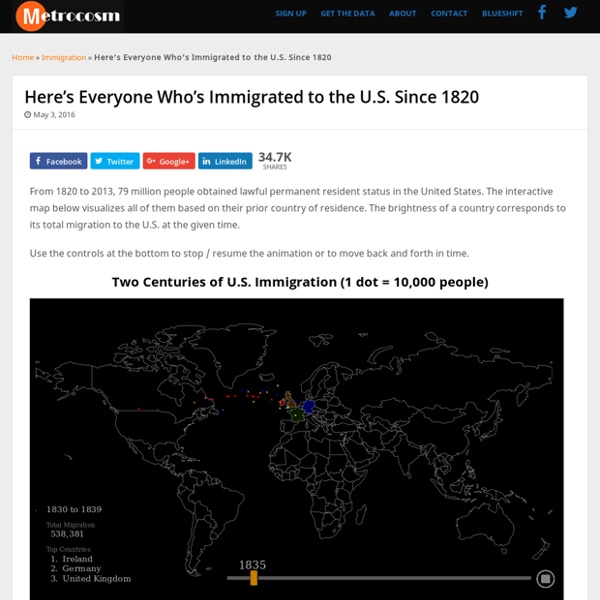 From 1820 to 2013, 79 million people obtained lawful permanent resident status in the United States. The interactive map below visualizes all of them based on their prior country of residence. The brightness of a country corresponds to its total migration to the U.S. at the given time. Use the controls at the bottom to stop / resume the animation or to move back and forth in time. Two Centuries of U.S. Immigration (1 dot = 10,000 people) Over time, the sources of immigration trace a clear path across the world. Through most of the 1800’s, immigration came predominantly from Western Europe (Ireland, Germany, the U.K.). Here are the largest immigration “waves” charted over time, showing the progression. While it may seem that immigration over the last few decades has been higher than ever before, the picture looks very different when viewed relative to the size of the U.S. population. Here is the same chart, with the immigration shown as a percentage of the U.S. population. Credit: Related

Iraq Humanitarian Snapshot (10 April 2016) Skip to main content Iraq Humanitarian Snapshot (10 April 2016) Iraq Humanitarian Snapshot (10 April 2016) 20160410_ocha_iraq_humanitarian_snapshot.pdf (English) Space(s): Iraq 17 Top-Rated Tourist Attractions in London It's little wonder London is one of the world's top tourist destinations, attracting upward of 15 million visitors each and every year. Britain's capital city is a vibrant arts and entertainment center (its theaters are always busy), and 50 years after the Beatles, the country's music scene still rocks. London also boasts one of the planet's greatest concentrations of cultural attractions. From royal palaces to the people's parliament, from Roman ruins to castles and cathedrals, you could spend endless days exploring London's sites without ever running out of unique things to see and do. 1 Buckingham Palace and the Changing of the Guard Buckingham Palace and the Changing of the Guard

Manhattan Skyscraper Explorer Loading... Manhattan Skyscraper Explorer ArcGIS API for JavaScript Disclaimer This is a non-commercial, demo application made at the Esri R&D Center Zurich for building exploration in Manhattan. The world’s flags, in 7 charts The graphics below categorize the flags of the world in fascinating ways — by color, age and design. Created by Ferdio, a design agency that makes infographics, they will show you everything you wanted to know about flags, and maybe more. You can click on the graphics to enlarge them. 1. Most of the world's flags aren't that old. The timeline below shows the date each nation adopted its current national flag. Education World Resource Roundup: Immigration Comments from President Donald Trump during his campaign (as well as recently) and a murder case out of “sanctuary city” San Francisco have brought the topic of immigration back into the national spotlight, begging educators to embrace some difficult, yet important discussions within their coursework. This can be a sensitive and emotionally-charged subject to bring to the classroom, and might hit home for many students. However, while immigration is a topic that many students might have strong opinions about, they might not have all the necessary background knowledge around laws, historical context, economics, and culture to logically back up their arguments. This, of course, makes it the perfect subject for an inquiry-based classroom.

International Organization for Migration The GLOBAL MIGRATION FLOWS interactive app tracks migrants around the world. This application is now being hosted by IOM.int. It is endlessly fascinating to explore where we're from. The underlying data for the map was published by the UN DESA in 2015. Using the app: Choose whether you want to access information about migrants leaving a country (Outward) or migrants entering a country (Inward). How much ? ou How many ?-anglais Apprendre l'anglais > Cours & exercices d'anglais > Exercices d'anglais > test d'anglais n°29536 : How much ? ou How many ? Hello everybody ! How much / How many Petit rappel On utilise How much + singulier ou indénombrable (que l'on ne peut pas compter) Adventures in Population Growth I’ve been playing around with the International Database at the US Census Bureau. They provide population estimates broken down by country, age and year for essentially every country. More importantly, they keep it updated every 6 months. One area I’m interested in for my economics research is population growth rates – or more importantly, shifts in population makeup over time.

Tech Tip: Digital storytelling with Google Map tools You’ve done it. Go ahead and admit it. You’ve searched for your house on Google Maps. In fact the first place you looked in Google Earth and Street View was your house. But Google Map tools are not just a consumption tool, they can be a powerful creation tool for students to tell stories — stories of history, literature, science, and social studies. time The history of the Statue of Liberty became the focus of a back-and-forth between Stephen Miller, an aide to President Donald Trump, and CNN’s Jim Acosta during the White House Press Briefing on Wednesday. The broadcast journalist had argued that the President’s support of a bill that would place new limits on legal immigration did not jibe with the spirit embodied by the monument, as expressed by the Emma Lazarus poem that has become synonymous with Lady Liberty: “Give me your tired, your poor,” it famously declares, “Your huddled masses yearning to breathe free.” “The poem that you’re referring to was added later,” Miller replied.

Mapping Maps and Gaps: A Critical Digital Cartography of the ‘Mediterranean Refugee Crisis’ – Samuel Merrill Last month I attended the 2016 Digital Methods Initiative Winter School led by Richard Rogers and his team at the University of Amsterdam. Organised in the format of a data sprint the event saw participants attend a day of keynote talks presented by the likes of, among others, Lilie Chouliaraki, Mathieu Jacomy, Carolin Gerlitz and Rogers himself before turning their attention to a hands-on digital project for the remainder of the week. With the rather clever title of, Otherwise Engaged – Critical Analytics and the New Meanings of Engagement Online the Winter School set out to problematize online engagement and develop new methods by which to measure, visualise and interpret that engagement. Our pilot study compared the maps, images, locations and texts returned by Google searches for the queries ‘refugee routes’ and ‘migrant routes’ in seven languages: Arabic, English, French, Italian, Dutch, German and Spanish.

edutopia To get a sense of the best practices in contemporary school design, we interviewed four of the top K–12 architecture firms in the U.S.: Fanning Howey, Corgan, Perkins+Will, and Huckabee. Collectively, the companies bill hundreds of millions of dollars in work annually, and have built or renovated thousands of schools throughout the country and around the globe. Key insights into five common design principles—technology integration, safety and security, transparency, multipurpose space, and outdoor learning—surfaced during our conversations.