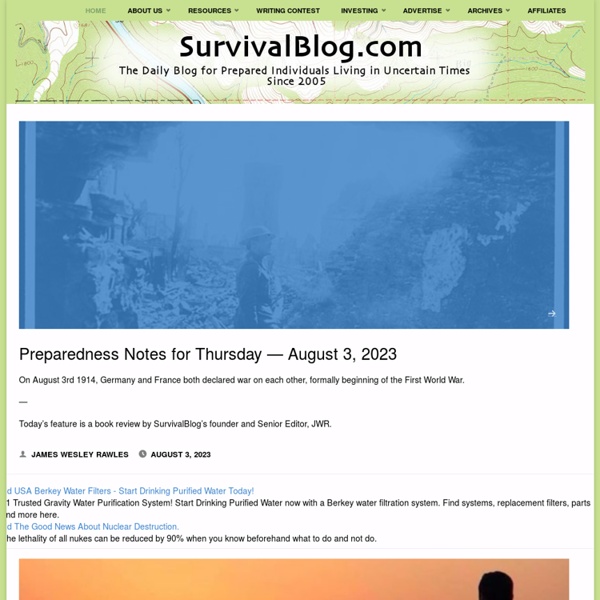 2012 Survival Strategy At the end of 2012 , an all-destroying pole shift is waiting for us, one of the thousands that have already taken place in the history of the earth. However, this time it will be completely different. Because our ancestors from a distant past had calculated in advance the previous one and escaped with their knowledge; we are now living in a highly-advanced civilization that will be turned into dust in 2012 . Unless, of course, we take the necessary measures beforehand.

Survival Food – 56 food supplies from the store When disaster strikes, there’s a pretty good chance your local grocery stores are going to be stripped bare in a matter of hours. From panicked people trying to stock up on last minute supplies, to those who failed to prepare for even short-term disasters and now find themselves facing the prospect of starving, your local grocery store is going to look like a battleground in a post-apocalyptic movie. Most grocery stores have a maximum 3 day supply of goods on hand before they run dry. That means even short-term disasters like hurricanes, floods and earthquakes can cause supply chain problems that will quickly wipe out their inventory.

ontheroofs In the Chungking Mansions you can find everything: tiny guest houses with just a few rooms for rent, curry cafes, a market on the ground floor, a variety of shops, currency exchange offices, touristic offices, where you can get a Chinese visa. Next to the main entrance, you can always find the Indians and the Pakistanis, offering you to buy some hash, weed or even cocaine. During one of our trips, I decided to check what they will sell, to bate my curiosity. For 120 Hong Kong dollars, I got 3 grams of Kashmir hashish.

The Sunday Survival Buzz - Volume 62 Welcome to this week’s Sunday Survival Buzz – a roundup of preparedness news, tips, articles and recommendations from around the web. But first, an update on my own preps. And oh my gosh, what a week this has been. GammaPix Lite The GammaPix(TM) Lite App, developed initially for several federal agencies, turns your phone into a detector of ionizing radiation. This isn't one of those fake Geiger counters. The GammaPix technology has been successfully tested at independent labs with calibrated sources. It was developed with support from the U.S. Department of Defense, the Domestic Nuclear Detection Office (U.S. Department of Homeland Security), and the Transportation Research Board (U.S.

Dwight.txt `/+o/. .+sso+/:oydyo/:-:+shdys/ `-:. `-/+o+/` `/sdh+/::/::ss:`ymdhyso//hmMNyhNNms+ososys+/-:/shms/` .+hNNy++oo+/.`. 051. Simulation Theory and the Nature of Reality with Physicist and Author, Tom Campbell. - “When the original founding fathers of quantum mechanics were doing these experiments they were really excited… making statements like- ‘if quantum mechanics doesn’t blow your mind, that’s because you don’t understand quantum mechanics.’ They realized this was a really big deal philosophically, (and) scientifically… Then they tried to come up with a good explanation. They couldn’t find one… Now they just blow it off as ‘nobody will ever know… it’s just weird science.’ This My Big Toe theory though, explains it.” -Tom Campbell If that chopped up quote sounds vague, pseudo science-y, or possibly confusing (especially if you’re not familiar with some of the basic ideas behind quantum mechanics) I get that.

21 Blogs with Advice on How to Create an Emergency Plan for Your Family Posted on April 25, 2013 by admin | in Nanny You never know when an emergency situation may arise; however, you can take certain steps to ensure that you are as prepared as possible for if and when one occurs. Start by preparing an emergency plan for a fire. Ten Essentials A simple dry magnetic pocket compass The Ten Essentials are survival items that hiking and scouting organizations recommend for safe travel in the backcountry. List[edit] According to the Mountaineering: The Freedom of the Hills, 6th edition, the ten essentials are:[3] Psyleron Who We Are Psyleron was founded in 2005 by friends and affiliates of the Princeton Engineering Anomalies Research laboratory (PEAR). What We Do We provide products to explore the influence of the mind on the physical world. These products can be used in quantitative research experiments, as self-reflection tools, or as fun devices that provide a window into a whole new area of scientific and personal exploration. We also provide research assistance to those interested in creating their own studies, develop customized software applications, and collect data from our users as part of an ongoing effort to understand the nature of mind-matter effects.