Never Talk to the Police 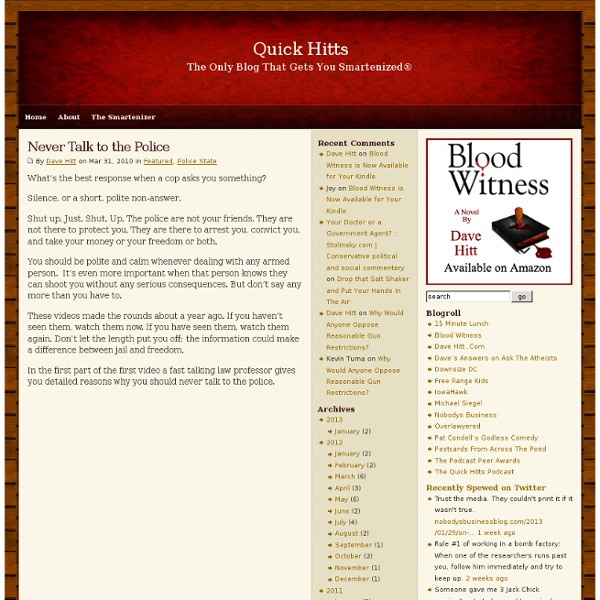 By Dave Hitt on Mar 31, 2010 in Featured, Police State What’s the best response when a cop asks you something? Silence, or a short, polite non-answer. Shut up. Just. Shut. You should be polite and calm whenever dealing with any armed person. These videos made the rounds about a year ago. In the first part of the first video a fast talking law professor gives you detailed reasons why you should never talk to the police. This is part two, where a former police officer fills in the details. Here are some practical examples of how to legally preserve your rights in an encounter with police: Ok, after all that heavy duty stuff, we need a breather.

100 Items to Disappear First 100 Items to Disappear First 1. Generators (Good ones cost dearly. Gas storage, risky. Constrictor knot History[edit] First called "constrictor knot" in Clifford Ashley's 1944 work The Ashley Book of Knots, this knot likely dates back much further.[5] Although Ashley seemed to imply that he had invented the constrictor knot over 25 years before publishing The Ashley Book of Knots,[1] research indicates that he was not its originator.[6] Ashley's publication of the knot did bring it to wider attention.[7] Although the description is not entirely without ambiguity, the constrictor knot is thought to have appeared under the name "gunner's knot" in the 1866 work The Book of Knots,[8][9] written under the pseudonym Tom Bowling.[10] in relation to the clove hitch, which he illustrated and called the "builder's knot". He wrote, "The Gunner's knot (of which we do not give a diagram) only differs from the builder's knot, by the ends of the cords being simply knotted before being brought from under the loop which crosses them.

All About Anarchism This classic statement of anarchism was written by a diverse group of anarchists in Cardiff around 1980 and it is an interesting historical record of the optimism of mainstream anarchist thought at that time. There is probably more rubbish talked about anarchism than any other political idea. Actually, it has nothing to do with a belief in chaos, death and destruction. Neil deGrasse Tyson Lists 8 (Free) Books Every Intelligent Person Should Read A Reddit.com user posed the question to Neil deGrasse Tyson: "Which books should be read by every single intelligent person on the planet?" Below, you will find the book list offered up by the astrophysicist, director of the Hayden Planetarium, and popularizer of science. Where possible, we have included links to free versions of the books, all taken from our Free Audio Books and Free eBooks collections. Or you can always download a professionally-narrated book for free from Audible.com. Details here. If you're looking for a more extensive list of essential works, don't miss The Harvard Classics, a 51 volume series that you can now download online.

12 Gadgets to Survive the Apocalypse Now is a good time to ponder the apocalypse. Iran and North Korea are going nuclear, the wonky weather is a harbinger of catastrophic climate change, and end-of-the-world blockbusters abound. (Tim Burton's '9' came out last week and '2012,' 'The Road,' and 'Zombieland' are all coming up later this fall.) In that dismal spirit, the Switched team has gathered its first choices for last-chance gadgetry -- a collection of 12 must-haves if society is in peril, whether it be by fire or ice, zombies or aliens. Using our handy "What Type of Apocalypse Will It Be?"

Howstuffworks "10 Ways to Survive a Snowstorm" There's no truer statement than the old adage "you can't control the weather." You can't­ even predict it with complete certainty. As advanced as our meteorological forecasting techniques are these days, weather systems are changeable forces of nature. They can come on quickly, switch direction without notice and build in intensity in a short period of time. Whether you're at home, on foot, in your car or at work, a winter snowstorm can catch you off guard. The Nation­al Snow and Ice Data Center defines a blizzard as a "violent winter storm, lasting at least 3 hours, which combines below freezing temperatures and very strong wind laden with blowing snow that reduces visibility to less than 1 km."

Decked Out: Zombie Apocalypse Unless you’ve been hibernating in your underground bunker for the last few weeks, you’re well aware that the zombie apocalypse is upon us (just like the Mayans predicted). We’re no suckers, we know there are a few steps we’ve got to take before any Walkers coming strolling into our neck of the woods. Besides settling on the ideal blunt object, we’ve got to have our attire in order. This is what we’re thinking. 1. J.Crew Irish Linen Camp Shirt- $88 2. Faith of Our ForeFathers December 2006 The Founders are once again in vogue. More than 35 books have been published about them just since January according to Gordon Wood, the foremost authority on that era. One of the sub topics of these books concerns the depth of the religious convictions of these men, particularly the Big Six: Washington, Franklin, Jefferson, Madison, Hamilton, and Adams.

Art Books We've been noticing a bit of a recent obsession with books. And no, not with reading the little nuggets of knowledge but using them as the canvas for art. This is like a massive step-up from idle marginalia doodling, or those picture books from school you used to scribble in. This is proper, detailed and at times painstaking book art. You couldn't do that with a Kindle. How To Be A World-Class Survivalist in 5 Simple Steps Joy Paley Activist Post With the recent econopocalypse, it’s no wonder that people are becoming more interested in what it would take to survive after our current society has undergone a major shift. After all, if something we thought was intrinsically stable—our financial sector, and the guarantee of ever increasing wealth—is actually pretty flimsy, well, a lot of other things can be brought into question too. Take out a seemingly small piece of the puzzle, like access to gasoline, and you find that your local grocery will run out of goods within 2 days. Learning the basic skills to survive without the modern conveniences of society is a way to prepare yourself for these unpredictable shifts.