9 Ways to Make Fire Without Matches 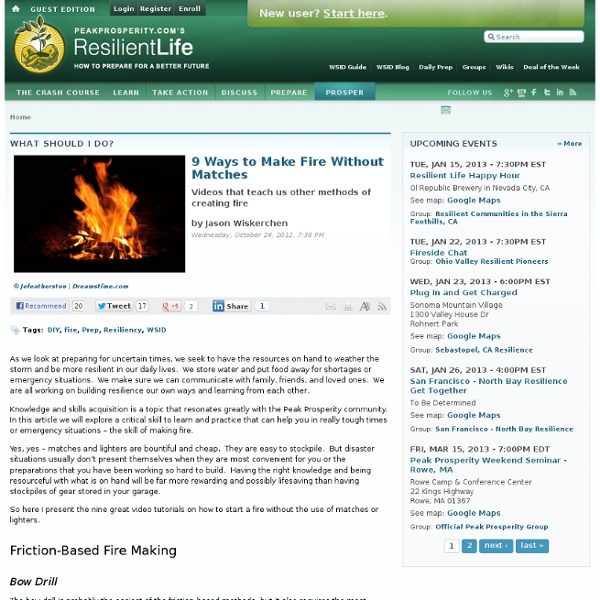 What Should I Do? Videos that teach us other methods of creating fire by Jason Wiskerchen Wednesday, October 24, 2012, 8:38 PM As we look at preparing for uncertain times, we seek to have the resources on hand to weather the storm and be more resilient in our daily lives. Knowledge and skills acquisition is a topic that resonates greatly with the Peak Prosperity community. Yes, yes – matches and lighters are bountiful and cheap. So here I present the nine great video tutorials on how to start a fire without the use of matches or lighters. Friction-Based Fire Making Bow Drill The bow drill is probably the easiest of the friction-based methods, but it also requires the most components. Hand Drill It's a bit more work than the bow-drill method, but the hand drill is an effective way to start a fire going if you don't have access to cordage or the other components of the bow-drill system. Fire Plough Flint and Steel Generic Flint and Steel Striker with Char Cloth To make char cloth: Lens-Based Methods

Flint and Steel There's no doubt that the ability to make and control fire was one of the greatest technological advancements of mankind after tool making. It was there for warmth, protection, cooking, hunting and even primitive agricultural techniques. The knowledge of how to make fire utilizing primitive methods directly connects us to the people who used these techniques. When you are coaxing fire from some tinder using a coal that you created, and you see the glow get brighter, and you smell that curl of smoke, and the tinder suddenly bursts into flame, you are experiencing exactly what the ancient ones did so very long ago. Sparks From Flint It is the old one. Long ago the ability to create and make use of hot sparks to make fire was discovered. Top: A fire works kit consisting of a striker and a piece of good black flint is shown in its waterproof tinder box. Before the introduction of steel, sparks were obtained using a piece of iron pyrite for the striker. How To Catch A Spark

Orange What Is Fire Made Of? - Chemical Composition of Fire Question: What Is Fire Made Of? You know that fire generates heat and light, but have you ever wondered what it is made of? Here is a look at the chemical composition of fire. Answer: Fire is the result of a chemical reaction, called combustion. At a certain point in the combustion reaction, called the ignition point, flames are produced. Why Is Fire Hot? References State of Matter of FireOn Fire, Adobe Flash-based science tutorial from the NOVA television series.

Wet Fire Wood… How To Start A Fire October 23, 2015, by Ken Jorgustin Depending on the weather and season, you might not always have nice dry wood lying around to start a fire with. Here are some tips and instructions how to start a fire in an environment of wet wood: You will need to procure (or have) some dry tinder. The tinder should be the lightest, driest, and most combustible materials in your fire bundle, and its purpose is to catch the flame and burn long enough to ignite larger pieces of kindling. The simplest way to get dry tinder is to already have some of it tucked away in your pack. Cotton Balls & Petroleum Jelly Mix some cotton balls with some Vaseline and store them in a container. Paper All sorts of paper including newspaper, paper bags, etc., except glossy papers from magazines which do not burn well. Fine Steel Wool Yes it works… the fine steel wool which you might be using to scour your pots and pans is flammable. Char Cloth Make this ahead of time. Kindling is the next size up from tinder.

How to Make Fire With Water BC Outdoor Survival/Video screen capture From cooking fish on a rock to building a DIY wood gasifier from old cans, Paul Osborn of BC Outdoor Survival has shown us some pretty cool little survival tricks in his time. But the title of his latest video had me a little flummoxed—can you really start a fire with water? It turns out that what Paul is talking about is creating a lens using nothing but water and household plastic wrap—and then using that lens to focus the sun's rays on a piece of paper or other flammable material. (Like these DIY firelighters Paul showed us how to make before.) It turns out that his water trick is not only possible, but relatively simple. Now exactly what this trick offers in terms of sustainable living will be up for some debate. If the worst of the peak oilers doom-and-gloom predictions do come true, we'd best start hoarding plastic wrap and water so we can still cook dinner.

Blog When the shelves go bare, the supply systems shutdown, and chaos hits the populated areas, it’s highly unlikely you’ll be frequenting your favorite restaurant for some time. If you’ve been a reader of my blog for even a short time, you know how much importance I put on setting aside a years supply of food storage; but the reality is, food maybe taken from you or it may have to be left behind… However, knowledge and skill will always be with you. It’s during times like these that the skill of hunting will come in real handy. After all, the more skills in self-sufficiency you can develop for obtaining food through either growing or harvesting (a.k.a. hunting/trapping) the less dependence you’ll have upon either commercial food sources or your own food storage. Why it’s Time to Learn How to Hunt Now Lest you think that you will simply walk into the woods and harvest a cornucopia of animals when things go south, think about this: As an example, let’s just look at the deer population… Thanks guys!

Advantages of the Dakota Fire Hole September 12, 2012, by Ken Jorgustin A Dakota Fire Hole is simply a method of building a fire that utilizes a number of advantages over other methods. First though, here is how to build a Dakota fire pit… How to Dig a hole about a foot in diameter and a foot deep. Next you will dig the airflow tunnel. Partway fill the fire pit with kindling and light the fire. The fire creates a suction which is drawn into the airflow tunnel, resulting in a much hotter and efficient burning fire. Advantages The fire burns very hot. Less firewood is needed than conventional fire methods. Food or water will cook faster. The efficiency of the burn creates less smoke, which means less visibility. This method is particularly useful and manageable if it is very windy compared to other methods. The fire burns below the surface of the ground which shields the flame from being seen, especially at night. Tips Build the Dakota fire hole near the base of a tree to help diffuse the smoke, which will help avoid detection.