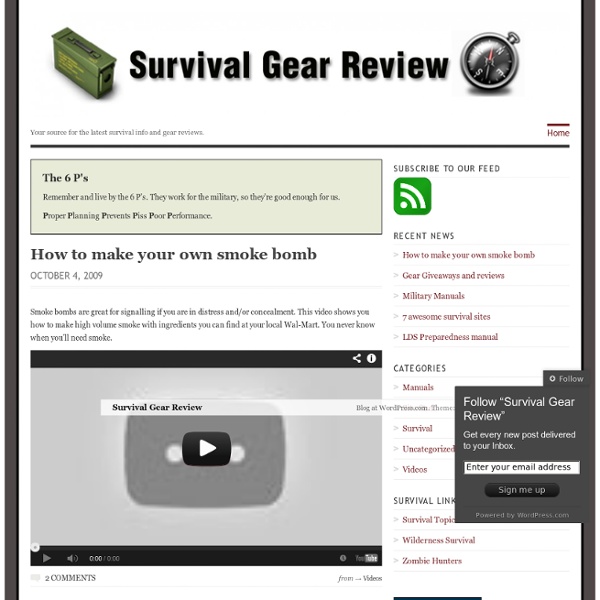 Remember and live by the 6 P's. They work for the military, so they're good enough for us. Proper Planning Prevents Piss Poor Performance. Smoke bombs are great for signalling if you are in distress and/or concealment. This video shows you how to make high volume smoke with ingredients you can find at your local Wal-Mart. You never know when you’ll need smoke.

100 Items to Disappear First 100 Items to Disappear First 1. Generators (Good ones cost dearly. Gas storage, risky. Survive Nature - Techniques for Surviving in every Natural Environment When you find yourself lost in the forest, you should be alert to the fact that there are predators and they are dangerous. Try to fashion a spear or knife out of branches to use as protection. Among the many predators to watch out for, bears are the most dangerous (especially Grizzlies): Black Bears: If you see a black bear 50 yards away or more, then keep your distance and continue hiking always making sure to not get closer. Constrictor knot History[edit] First called "constrictor knot" in Clifford Ashley's 1944 work The Ashley Book of Knots, this knot likely dates back much further.[5] Although Ashley seemed to imply that he had invented the constrictor knot over 25 years before publishing The Ashley Book of Knots,[1] research indicates that he was not its originator.[6] Ashley's publication of the knot did bring it to wider attention.[7] Although the description is not entirely without ambiguity, the constrictor knot is thought to have appeared under the name "gunner's knot" in the 1866 work The Book of Knots,[8][9] written under the pseudonym Tom Bowling.[10] in relation to the clove hitch, which he illustrated and called the "builder's knot". He wrote, "The Gunner's knot (of which we do not give a diagram) only differs from the builder's knot, by the ends of the cords being simply knotted before being brought from under the loop which crosses them.

Extreme Minimalism, A Minimalist Project of Travel and Discovey I’ve drawn an unusual amount of attention to my minimalism project this week. First, Dan Patterson of ABC Radio News interviewed me about my 15 things. Dan is one of those amazing interviewers that you wish you were just watching instead of getting interviewed by. Each question was eloquent and succinct. Then came my answers. I think I did a pretty good job; it was fun to do. Never Talk to the Police By Dave Hitt on Mar 31, 2010 in Featured, Police State What’s the best response when a cop asks you something? Silence, or a short, polite non-answer.

BASIC LIST OF SUGGESTED ITEMS FOR LONG TERM SURVIVAL Some people are saying we should prepare for at least 7 days, but the way things go after a hurricane, tornado, floods, loss of electricity and the fact that these disasters will continue and perhaps even get worse in coming years according to trends, one week is not enough. Some have said 7 years, but that seems too long so do what you can. Be sure to use the older stocked goods first and replace them with new. Otherwise you will end up with all old food you might not even want to eat. Always check canned tomatoes for spoilage, as even in the can they can spoil. Decked Out: Zombie Apocalypse Unless you’ve been hibernating in your underground bunker for the last few weeks, you’re well aware that the zombie apocalypse is upon us (just like the Mayans predicted). We’re no suckers, we know there are a few steps we’ve got to take before any Walkers coming strolling into our neck of the woods. Besides settling on the ideal blunt object, we’ve got to have our attire in order. This is what we’re thinking. 1. J.Crew Irish Linen Camp Shirt- $88 2.

Bacon in Every Survival Kit Let me explain... Before you run away laughing at the title and opening of this article, let me go into a bit more detail so that you can see just where I'm coming from. The idea came to me while we were discussing various fuels that you can find or make to use for fires when you're in a survival situation.

Howstuffworks "10 Ways to Survive a Snowstorm" There's no truer statement than the old adage "you can't control the weather." You can't­ even predict it with complete certainty. As advanced as our meteorological forecasting techniques are these days, weather systems are changeable forces of nature. They can come on quickly, switch direction without notice and build in intensity in a short period of time. Whether you're at home, on foot, in your car or at work, a winter snowstorm can catch you off guard. The Nation­al Snow and Ice Data Center defines a blizzard as a "violent winter storm, lasting at least 3 hours, which combines below freezing temperatures and very strong wind laden with blowing snow that reduces visibility to less than 1 km."

How to eat wild stuff and not get poisoned (how-to) Let's play pretend for a moment. Are you with me? Let's pretend you can't go down to the supermarket for food to eat. In fact, let's pretend that there is not a supermarket for one hundred miles in any direction, and you don't have any food with you. Man vs. Wild Man vs. Wild,[1] also called Born Survivor: Bear Grylls,[2] Ultimate Survival,[3][4] Survival Game,[5] or colloquially as simply Bear Grylls in the United Kingdom, is a survival television series hosted by Bear Grylls on the Discovery Channel. In the United Kingdom, the series was originally shown on Channel 4, but later series were broadcast on Discovery Channel UK. The series was produced by British television production company Diverse Bristol. The show was first broadcast on 10 November 2006 after airing a pilot episode titled "The Rockies" on 10 March 2006.

5 Ideas for Fire Tinder A while ago I asked readers Do You Have 5 Ways to Make Fire? The article concentrated on fire starters; steel and flight, lighters, and a few less common systems. However, most of those will be useless for building a fire if you don’t have some tinder to put the flame to. Here are 5 great ideas for fire tinder, both natural and homemade.