The Inuits of the Arctic. In the Arctic, under harsh cold and bare conditions, the Inuit people reside(d). 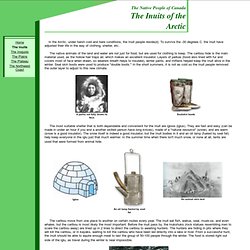 To survive the -30 degrees C. the Inuit have adjusted their life in the way of clothing, shelter, etc. The native animals of the land and water are not just for food, but are used for clothing to keep. The caribou hide is the main material used, as the hollow hair traps air, which makes an excellent insulator. Layers of parkas (hood also lined with fur and covers most of face when drawn, so wearers breath helps to insulate), winter pants, and mittens helped keep the Inuit alive in the winter. Seal skin boots were used to produce "double boots. " The most suitable shelter that is both dependable and convenient for the Inuit are igloos (iglus). The caribou move from one place to another on certain routes every year. The Inuit aquire many marquees as their culture and way of life is so different than other groups. Inuit language. Inuit Homes. Inuit. Inuit (pronounced /ˈɪnuːɪt/ or /ˈɪnjuːɪt/; Inuktitut: ᐃᓄᐃᑦ, "the people"[5]) are a group of culturally similar indigenous peoples inhabiting the Arctic regions of Greenland, Canada, and the United States.[6] Inuit is a plural noun; the singular is Inuk.[5] The Inuit languages are classified in the Eskimo-Aleut family.[7] The Inuit live throughout most of the Canadian Arctic and subarctic in the territory of Nunavut; "Nunavik" in the northern third of Quebec; "Nunatsiavut" and "NunatuKavut" in Labrador; and in various parts of the Northwest Territories, particularly around the Arctic Ocean. 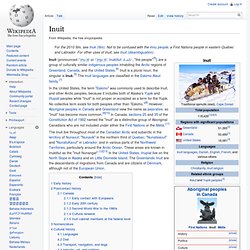 These areas are known in Inuktitut as the "Inuit Nunangat".[12][13] In the United States, Inupiat live on the North Slope in Alaska and on Little Diomede Island. The Greenlandic Inuit are the descendants of migrations from Canada and are citizens of Denmark, although not of the European Union. Early history[edit] For pre-history, see: Paleo-Indians and Archaic periods (Canada) Postcontact history[edit]

Inuit Food. Click on the names below to see their research... 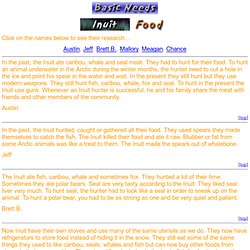 Austin, Jeff, Brett B., Mallory, Meagan, Chance In the past, the Inuit ate caribou, whale and seal meat. They had to hunt for their food. To hunt an animal underwater in the Arctic during the winter months, the hunter need to cut a hole in the ice and point his spear in the water and wait. In the present they still hunt but they use modern weapons. Austin In the past, the Inuit hunted, caught or gathered all their food. Jeff The Inuit ate fish, caribou, whale and sometimes fox. Brett B. Now Inuit have their own stoves and use many of the same utensils as we do. Mallory In the past, if they wanted to cook the meat, the hunter had a tool that included a bow-drill and piece of driftwood. Meagan [top] The Inuit and Polar Bears.