How to See the World: Art of Travel; European and World Backpacking; On$25 a... 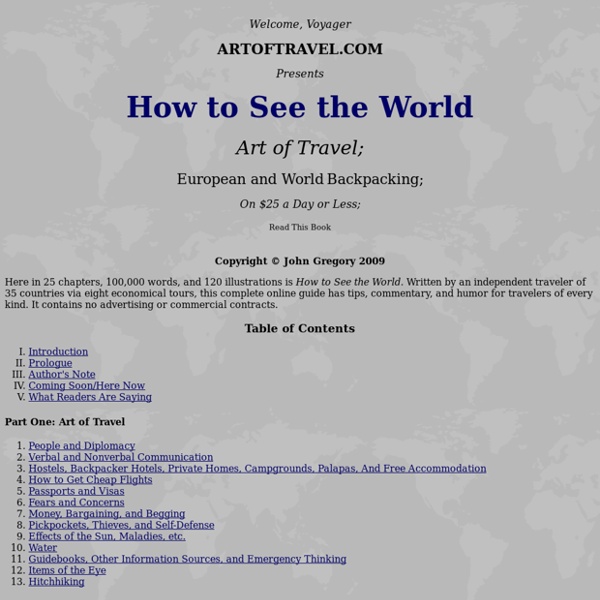 Welcome, Voyager Presents How to See the WorldArt of Travel;European and World Backpacking;On $25 a Day or Less;Read This BookCopyright © John Gregory 2009 Here in 25 chapters, 100,000 words, and 120 illustrations is How to See the World. Written by an independent traveler of 35 countries via eight economical tours, this complete online guide has tips, commentary, and humor for travelers of every kind. It contains no advertising or commercial contracts.

How to Disappear There are many reasons you might want to disappear, some honorable some not so honorable. Maybe you have a stalker or you would like more privacy, maybe you are avoiding domestic violence or identity theft... whatever the reason is here are a few tips that will help you do just that. The very first thing you should do if you would like to make your earthly presence a little less conspicuous is to stop getting your mail at the place you live. A post office box really wont do either because you need two forms of identification linking you to the place you live.

50 Strange Buildings of the World This is the original list of 50 strange buildings which has been and is being copied (stolen) by many bloggers. If you wish to post it on your blog or website, feel free to use up to 20 buildings from this list and give a proper link to our website ( as the source article. Ok, now enjoy this weird, odd, bizarre and incredible looking arcitechture! After reading it, don’t forget to check Part II and Part III. 1. 5 Awesome New Inventions You'll Never Hear About" Printing has come a long way since the computer landed on the desktop. First, there were daisy-wheel printers, then dot-matrix printers, then inkjet and laser printers. The problem with all of these output devices, of course, is that they require paper -- lots of it -- and expensive consumables, like toner.

grimmtmp from cmu.edu This book contains 209 tales collected by the brothers Grimm. The exact print source is unknown. The etext appears to be based on the translation by Margaret Hunt called Grimm's Household Tales, but it is not identical to her edition. (Some of the translations are slightly different, the arrangement also differs, and the Grimm's scholarly notes are not included.) The etext received by the Universal Library did not include story titles.

Marginal Revolution: How to disappear Tips from a teacher (markets in everything): There are three key steps to disappearing. First, destroy old information about yourself. Call your video store or electricity company and replace your old, correct phone number with a new, invented one. The 20 Best Travel Websites on the Internet - Golden Book Traveler Update: Visit the 2012 version of The 20 Best Travel Websites on the Internet I hope that everyone who attended my SXSW Core Conversation panel on How to Make Money Traveling Around the World enjoyed the presentation. As promised, I have a listing of my top 20 favorite travel websites (in no particular order). I’m still working on my eBook “70 Vacations in 7 Months“.

20 Creative Resume Designs Which Will Amaze Any Potential Employer A great showcase design post of some truly creative and inspiration CV designs which im sure would blow away any potential employer. The post focus on creative designs which make use of creative layout and designs which focus on colour. We would love for you to share within the comments your favourite designs from the post How to win Rock-paper-scissors every time I admit it. When I first heard there are actual tournaments for Rock-paper-scissors, sanctioned by the World Rock Paper Scissors Society, I laughed. I mean seriously, $50k to the winner of a game that requires no skill whatsoever? 20 Things I’ve Learned From Traveling Around the World for Three Years Gary Arndt is the man behind Everything Everywhere, one of the most popular travel blogs in the world, and one of Time Magazine’s “Top 25 Best Blogs of 2010.” Since March 2007, Gary has been traveling around the globe, having visited more than 70 countries and territories, and gaining worldly wisdom in the process. Today, I’ve asked him to share some of that wisdom. Enter Gary

Vanishing Point: How to disappear in America without a trace Where there's water, life is possible. True, it may be very difficult and very hard to live, depending, but anyone who's driven, hiked, or camped in the American South West will have noticed that cities and ranches crop up where there's surface water or where there's been a well dug. Within the state of California, Nevada, Arizona, Utah, New Mexico, and Colorado, there are deserts, mesas, mountains, and forests where normally people never or rarely visit; not-so-secret places where there's water, access to a road within a day's hike, and where a fairly rugged individual may hide while remaining basically healthy, marginally well fed, and reasonably sane. In this section I'll look at two such environments, neither of which I would recommend, but one of which I'd suggest is a reasonable way to live in basic health while either on the run, hiding out from the law, old girl friends, the draft for an illegal war, putative wives and such.