12 Gadgets to Survive the Apocalypse 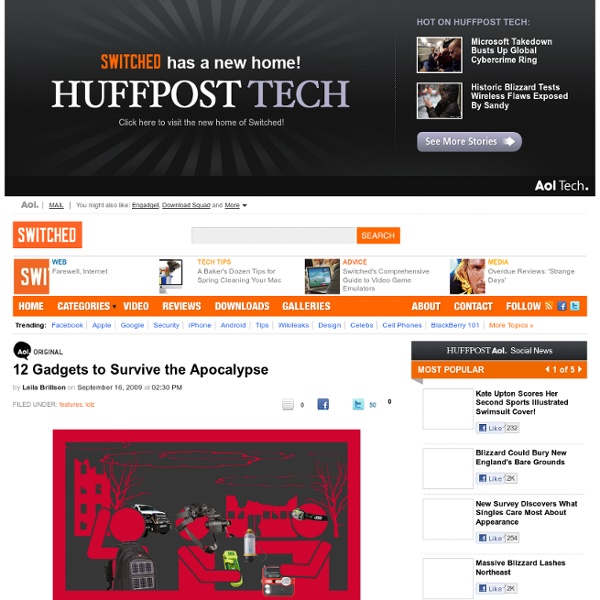 Now is a good time to ponder the apocalypse. Iran and North Korea are going nuclear, the wonky weather is a harbinger of catastrophic climate change, and end-of-the-world blockbusters abound. (Tim Burton's '9' came out last week and '2012,' 'The Road,' and 'Zombieland' are all coming up later this fall.) In that dismal spirit, the Switched team has gathered its first choices for last-chance gadgetry -- a collection of 12 must-haves if society is in peril, whether it be by fire or ice, zombies or aliens. Using our handy "What Type of Apocalypse Will It Be?" chart below, you'll be able to find the right gadgets for the right disaster and the ensuing fallout. ACR Electronics Microfix Personal Beacon Good for: Zombie Attack, Rapidly Spreading Virus, Aliens, Floods With an internal GPS, this little guy signals satellites to identify your exact location, as well as your name, address, and medical info. Scope Ford F-650 XUV Eton American Red Cross Solarlink FR360 Radio 400 Ft. LIFESAVER Bottle

Galaxy : Built with Processing Recommended Version 7 Update 55 Select the file according to your operating system from the list below to get the latest Java for your computer. By downloading Java you acknowledge that you have read and accepted the terms of the end user license agreement <p><span class="termhighlight">In order to optimize your experience and provide you with accurate messages, please enable javascript in your browser for the duration of your Java installation.</span></p> What is Java? Java allows you to play online games, chat with people around the world, calculate your mortgage interest, and view images in 3D, just to name a few.

6 Signs You're About to be Attacked by Zombies Every Saturday, Cracked lets someone from another website do the update for us. They get to show off their stuff to our fans, and we get to be lazy while someone else does our job for us. In the latest example of our convenient selflessness, former Cracked writer Matt Wilson of the International Society of Supervillains lays out some sure signs you're about to be swarmed by the living dead. It's as if it's almost Halloween or something. Your first instinct during a crisis is to go to your mall.

In the Garden Online - Colleen's Picks - Ten Vegetables You Can Grow in Shade It's a common misconception that the only site to grow vegetables in s one that's in full sun. For some vegetables, such as tomatoes, peppers, and squash, this is entirely true. But those of us who have shade are not doomed to a life without homegrown produce. Basically, a good rule to remember is that if you grow a plant for the fruit or the root, it needs full sun. If you grow it for the leaves, stems, or buds, shade is just fine. Keep in mind, no vegetable will grow in full shade.

How To Be A World-Class Survivalist in 5 Simple Steps Joy Paley Activist Post With the recent econopocalypse, it’s no wonder that people are becoming more interested in what it would take to survive after our current society has undergone a major shift. After all, if something we thought was intrinsically stable—our financial sector, and the guarantee of ever increasing wealth—is actually pretty flimsy, well, a lot of other things can be brought into question too. Take out a seemingly small piece of the puzzle, like access to gasoline, and you find that your local grocery will run out of goods within 2 days. Learning the basic skills to survive without the modern conveniences of society is a way to prepare yourself for these unpredictable shifts.

The World’s Top Ten Social Networks Social Networking has become a global phenomenon over the past 8 years and continues to grow year on year. So we’ve all heard of the big players like Twitter and Facebook, but there are thousands of Social Networking sites out there, many of which have been left by the wayside since the introduction of Facebook. Let’s take a look at the top ten Social Networks of 2011. How 7 Iconic Movie Characters Would Do In a Zombie Attack There's not a movie on Earth that wouldn't be drastically improved by the addition of zombies. Whether it's a romantic comedy, a buddy cop flick or a documentary about global warming, the inclusion of a sudden attack by relentless, blood-thirsty zombies is a surefire way to make any movie more compelling, more thrilling and more award-winning. To demonstrate this principle, we've hired a team of elite screenwriting geniuses who, using the finest Pentium computers available, are busy rewriting the classic movies of our age to include zombies.

The Quick Start Guide for getting prepared image by akeg There’s just no telling when Armageddon will occur, nor is there a date scheduled, yet, for a zombie invasion. However, all this talk lately about the debt ceiling and a looming financial apocalypse has scared a lot of people. Many of them have done very little to prepare and are wondering, “Is it too late?” Never Talk to the Police By Dave Hitt on Mar 31, 2010 in Featured, Police State What’s the best response when a cop asks you something? Silence, or a short, polite non-answer. Five Reasons Why Your Mission Statement Probably Stinks I can probably count on one hand the number of great company mission statements I've seen in my over two decades in marketing. While most business owners have been told that they need to have a mission statement, not everyone has been instructed on how to create one that's useful and meaningful. By definition, a mission statement communicates the fundamental purpose and values of a business or organization.

5 Scientific Reasons a Zombie Apocalypse Could Actually Happen That, ladies and gentlemen, is what we like to call a real, live, undead fucking zombie. So there. Chances this could cause a zombie apocalypse: Think about it. A course on how to live sustainably in the inner city Beyond the fence of Kellog’s East Austin’s garden sits a salvage yard piled with cars. But in the shadow of this graveyard of a fuel-fed civilization, Kellog and the Rhizome collective plant seeds of self-sufficiency. %authorad4% Billed as an “intensive seminar on urban ecological survival skills,” RUST includes sessions titled “Humanure and worm composting,” “Energy depletion and city futures,” “City chickens and micro-livestock” and “DIY air purification.” Howstuffworks "10 Ways to Survive a Snowstorm" There's no truer statement than the old adage "you can't control the weather." You can't­ even predict it with complete certainty. As advanced as our meteorological forecasting techniques are these days, weather systems are changeable forces of nature. They can come on quickly, switch direction without notice and build in intensity in a short period of time. Whether you're at home, on foot, in your car or at work, a winter snowstorm can catch you off guard. The Nation­al Snow and Ice Data Center defines a blizzard as a "violent winter storm, lasting at least 3 hours, which combines below freezing temperatures and very strong wind laden with blowing snow that reduces visibility to less than 1 km."