A Rocket Stove Made From a Five Gallon Metal Bucket 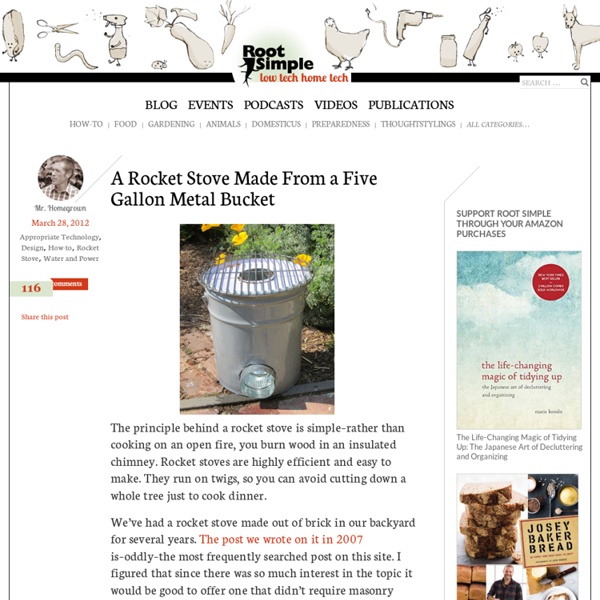 The principle behind a rocket stove is simple–rather than cooking on an open fire, you burn wood in an insulated chimney. Rocket stoves are highly efficient and easy to make. They run on twigs, so you can avoid cutting down a whole tree just to cook dinner. We’ve had a rocket stove made out of brick in our backyard for several years. Using a piece of 4″ vent pipe and a 90º elbow, I made the chimney. I traced the outline of the vent pipe on to the lid of the bucket and cut this hole out with a jig saw. Using the vent pipe as a guide again, I cut out a 4″ hole near the bottom of the bucket. I used one part clay (harvested from the yard) to six parts vermiculite as my insulation material. With the vent pipe in place, I packed the insulation into the bucket and let it dry for a few days before putting the lid on. I found a barbecue grill at Home Depot that rests on the top of the bucket to support a pot. The last step was to add the new Root Simple stencil to the back. Related:  Stoves • Eco-living! • Energy creation

Fabricating a Heavy-Duty Rocket Stove Rocket stoves are small efficient stoves that can produce a hot flame with only a few small pieces of wood. The reason it is called a rocket stove is because when wood is added to the fire the flames create an internal draft. As the draft is created, the fire begins to produce a jet of fire coming through the stove pipe. The stove flame eventually becomes so hot that it produces very little smoke. The stove should be able to produce a hot continuous flame that will lick the bottom surface of a pot or pan placed on top of the stove. These stoves were created out of necessity in third world countries to cook small meals and have recently become more popular as a do-it-yourself camping stove. Making a simple Savonius wind turbine by Lance Turner There are many situations where you might need a small amount of electricity, for instance running gate openers, safety lights, water level indicators and other low-power devices. While solar would seem like the ideal solution, quite often this is not possible due to location and shading problems. Just such a situation arose when I decided to make our new gates automatic. There were just too many trees in the way for solar power to work, and I didn’t want to run power some 30 metres or so from the house, as it would have meant digging a trench for the cables, which is almost impossible in our rocky ground. Why have automatic gates anyway? Anyway, I decided to provide power to the electric gate openers from a small wind turbine. The gate opener system itself is a home-made job, using car windscreen wiper motors driving long brass threaded shafts. Too much turbulence I briefly thought about what type of turbine I could install and how it would look. Making the turbine The mast

Rock Rocket Stove Is Held Together By Coat Hangers © Liz To Rocket stoves burn hot and clean, using very little wood or other combustibles. Vancouver industrial designer Liz To has designed a new version for Tibet, where they use dung as fuel. Liz notes that 1.6 million people die from indoor pollution from traditional "Three Stones" type fires every year. Designboom describes it: Canadian designer Liz to has repurposed unwanted wire hangers from north america as an opportunity for remote communities to build their own stove. It is a really clever idea; wire hangers don't take up a lot of space, (200,000 to a shipping container) but woven into the stove shape and filled with rocks, they become a stable and effective stove. The stove won a few Canadian industrial design awards when Liz presented it at Emily Carr University of Art + Design and deserves more.

How To Sharpen a Knife Like a Bad-Ass Boy Scout Build your own solar-powered water pumping station by Jeffrey Yago, P.E., CEM In the last issue, there was an excellent article by Dorothy Ainsworth on water pumping using mechanical windmills. In this issue I will address another form of "free" water pumping. There are many remote applications where a solar-powered water pump is more cost effective than installing a conventional grid-connected AC pump. I recently designed a solar-powered pumping system for a local farmer wanting to pump water from a lake up to a watering trough for cattle in a distant fenced field. We have also designed larger systems to pump directly from drilled wells up to elevated storage tanks, which provide gravity-fed water back down to remote ranch buildings. Basic system description These solar applications made economic sense because the location was too remote to run a long power line. By adding a storage tank and increasing the size of the pumping system, excess pumped water can be stored, which can continue to supply water during the night or when it's cloudy and the pump is off.

Rocket Concrete Stove & Cooker – Jasper Middelberg Into designing a multifunctional stove, adapted from Ianto Evans’ low-cost, low tech yet highly efficient and cozy warm Rocket Mass Heater. I like this modern brick adaptation, a heatwall and sitting area, combined with a cooking area, found here. In the process of optimalizing the flowform, adapting to a cast concrete, compact rocket & mass heater. Making a highly efficient, wood fired & gravity fed, wheelchair accessible heater and cooking stove. DIY: Beer Can Into Camping Stove You can whip one of these up in a matter of minutes. They’re so easy to make and they work really well. First find yourself some scissors and a beverage can and then start the above video. This is an inexpensive way to be prepared in the event of a power outage as these stoves give off a lot of heat and have the ability to cook large meals. They also make great holiday gifts for friends and family. For more great repurposing ideas, check out Repurposing 24/7 Image: Vimeo camp stoveDIYRepurposing Related Posts « After Reading This, You’ll Never Look at a Banana in the Same Way Again The Remedy For Everything But Death »

Hydropower from Reuse Reused: a small stepper motor as found in a printer 2 discarded CD-ROMs a foam tray some long stick (I used a piece of 20mm diameter PVC tube from demolition) a LED one or two tie-wraps a small piece of scrap paper Non-reused: The only non-reused part is the hot melt glue (I recommend the low temp type, especially when working with kids). Tools: scissors, screwdriver to disassemble the printer (not shown), cutting pliers or desoldering tools for (optional, not shown). With a bit of luck the LED can also be found in the discarded printer. To keep within the spirit, you can also reuse tie-wraps: when you cut them loose carefully near the “ratchet”, you end up with a shorter, but still usable tie wrap. Now to start building, see the next step.