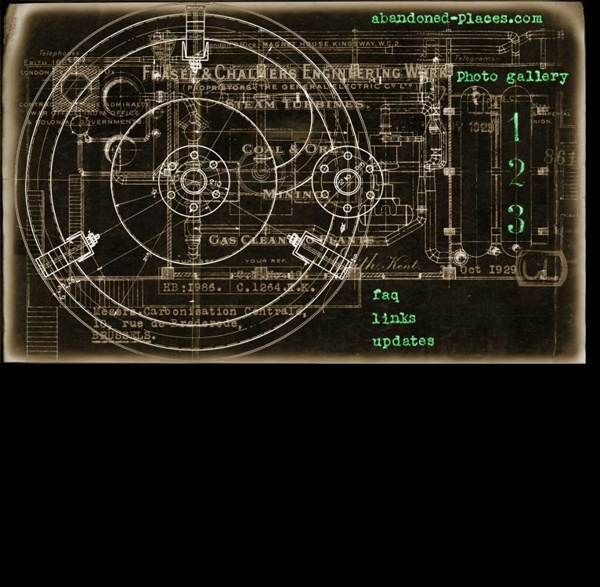 Abandoned Six Flags in New Orleans I met fellow explorers Mike Rosati and Minda Vermazen for the first time in the Las Vegas Airport, en route to New Orleans to photograph the abandoned Six Flags Theme Park that closed when Hurricane Katrina struck in August 2005. We read online that the park was being dismantled and sold for scrap beginning in January 2011, so with little time to spare, we hastily made plans to visit during the first week of December 2010. Our plane landed around midnight, and we drove straight to the park on a cursory scouting mission. We took a couple night shots from outside the park, made a plan, then headed to the hotel for some rest. Gaining Access The next day, we spent 10 hours documenting and exploring the park.

WAG: Elko Tract: Exploring the Lost City There's three of us in the Toyota, and when we turn onto the back road, we cut the lights off and drift onto the shoulder. Outside, the woods are dark and, in the moonless stillness, they seem to form a single, impenetrable wall. The dirt road ten feet from the car is almost invisible, except for the silver ribbons of the telephone and electrical wires that run down its center. For a moment we sit and stare. Then one of us cracks open a door. It's seasonably cold—early January—and once we've gotten the nerve to step away from the car and shuffle onto the dirt road, we're already rubbing our hands and stomping our feet. The Shattered Remains of Afghanistan’s Versailles The ferocity of Afghan resistance to foreign rule has been recorded down the centuries, from Alexander the Great to our own modern times. Yet it is not only outsiders who have been the focus of the ire of the Afghan people. The first Afghan ruler who endeavored to modernize Afghanistan on a western model, Amanullah Khan (left), was eventually forced to flee his own country. His once opulent palaces are now testimony to the conflict and violence which have dogged this complex country for more than a century.

Top 10 Travel The Ghost City – an apocalyptic inspiration for filmmakers for as long as I can remember. There is nothing more surreal than witnessing an abandoned city, and writers through the ages have grabbed hold of this fact with both hands. 8 Abandoned American Theme Parks “Open” for Exploration Amusement parks walk the fine line between fun-ish and semi-creepy. Maybe it’s the combination of sketchy rides, circus folk, questionable attractions, and way too many screaming kids, but there’s something a little unsettling about them. Add an ill-advised theme into the mix, and you’ve got a real summer-time winner. Lost Richmond – Exploring Elko Tract, Richmond’s “Lost City” « You Guys Should Know Richmond is a town of history. Everything is historic… the streets, the buildings, the canals, the houses.. its almost overload to the point where there’s so much history no one really pays attention to it on a daily basis because its just there. About a decade ago, I began hearing stories out of Richmond East-enders about Richmond’s Lost City.

Celebrity Photographer - Soviet Ghosts The Limited Edition artworks listed in this catalogue are available as archival pigment prints, professionally printed on 310g.s.m Giclee Hahnemühle German Etching board. Each print is signed, numbered, and accompanied with a signed Certificate of Authenticity. Prices are for unframed prints, framing can be included on request. For prices and information please download the catalogue. DOWNLOAD (Takes a Minute) To order or confirm availability please email

Creepy, Crusty, Crumbling: Illegal Tour of Abandoned Six Flags New Orleans [75 Pics] Hurricane Katrina killed this clown. According to the photographer, “An abandoned Six Flags amusement park, someone spray painted ‘Six Flags 2012 coming soon’ on the wall above the downed head. But they were clownin.’ Six Flags will never rebuild here.” That’s sad, but much of New Orleans has not been restored to her former glory. This defunct amusement park on the cityâ€™s eastern edge must surely serve as a constant reminder that Katrina tried to wash them off the map. Top 10 Links of the Week (Part 19): Urban Art & Abandoned Places (Image: Alf Gillman, reproduced with permission – seen previously on Urban Ghosts) Welcome to the 19th edition of our weekly link round-up, showcasing a selection of awesome articles from our friends, partners and sites we like around the web. This week’s edition looks at a range of interesting finds from urban and recycled art to naturally occurring fractal patterns, creepy abandoned leper colonies and forgotten theatres.

Afflicted: 11 Abandoned American Hospitals and Asylums “Open” for Exploration With some of the most disturbing and tragic histories of any buildings in the US, asylums and hospitals are way beyond creepy . Many of them were built in the late 1800s, when “mental illnesses” (such as masturbation, menopause, and teenage rebellion) were considered dangerous enough to lock someone in an asylum. A pain-inflicting misunderstanding of mental illness combined with a chronic mistreatment of its sufferers meant that many people were never released and spent the remainder of their lives in these horrible institutions. Preventorium Dolhain TB Hospital, Dolhain, Belgium - December 2012 Preventorium Dolhain TB Hospital – Fire Truck History The Preventorium Dolhain is a fantastic art deco style building situated near the river Weser in the quiet secluded area of Dolhain near Liege.

Photographing Decay: The Strange Appeal and Educational Qualities of Abandoned Places (Image: Dennis Gerbeckx, cc-nc-2.0) While Urban Ghosts covers a range of subjects, most of our content to date has focussed on historically intriguing places long since abandoned. So today, in the wake of our 500,000th unique visit, it’s time to take a step back and ask a couple of questions: why are we so fascinated by forgotten places? and why do mainstream individuals indulge in this strange under-the-radar hobby known as urban exploration? From a visual perspective, urbex photographer Thomas Slatin has some answers. (Image: Brent Pearson, cc-nc-nd-2.0)