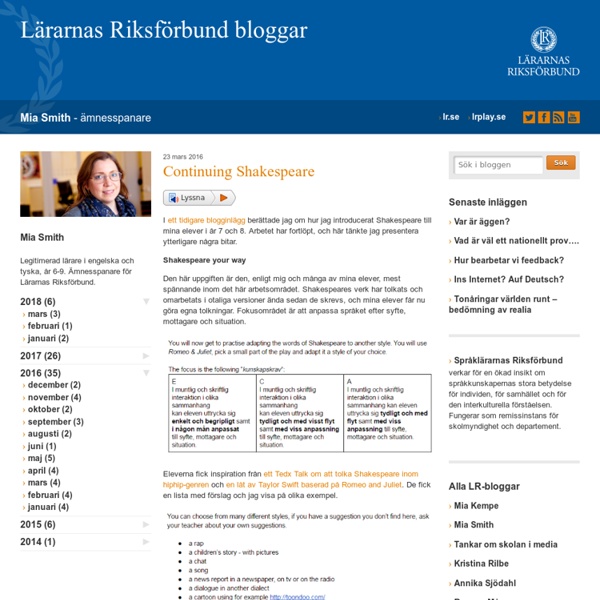 10 Illustrated English Idioms That Will Make Your Life Easier For many people learning English for the first time it can be daunting and complex language to master. Lots of silent letters, complex spellings and odd expressions which often go over the heads of most non-English speakers. To make learning English a little easier, Irish illustrator Roisin Hahessy has created some wonderfully simple yet funny pictures to help make things a little clearer. She's also a part-time English teacher in Brazil so she uses the series to aid her students as well. Now whenever you hear any of these English idioms, thanks to Hahessy at least now you'll have a better idea of where the conversation is heading! Via Roisin Hahessy

US Presidential Election Background 2016 presidential candidates Basic details of each candidate’s backgroundWhere the Candidates Stand on 2016’s Biggest IssuesWhat happens when … and how The important dates, Feb-Nov, listed and explained2016 Primary Results and Calendar Quickview of the results so far by NYTimes Warm-up What do kids want in a president? (1:20) Kids talk about what kind of person they think the next president should be like.

Shakespeare's Work, year 9 ⋆ WebEnglish.se A Theme Page about Shakespeare’s Plays and Language for intermediate level students, (A2.2 – B1), year 8-9 and above in Swedish Compulsory School. Related Pages: Shakespeare EZ (6-7), Shakespeare’s Life Warm-up Songs Vocabulary Lesson Plans Shakespeare Solos: watch the first six films Adrian Lester, Hamlet ‘To be or not to be’ Adrian Lester performs Hamlet’s soliloquy from act III, scene 1, in which the prince reflects on mortality and considers taking his own life. Joanna Vanderham, Romeo and Juliet ‘The mask of night is on my face’ Joanna Vanderham speaks Juliet’s monologue from the balcony scene in which she insists that her devotion to Romeo is true even if it has been a whirlwind romance.

Tips on how to make a video news report Do you want to make a TV news report but have no idea where to start? Watch this video to see how a group of students, with help from the BBC's Sophie Long, go about it and read the advice below. How to make a video news report What's the story? Picture dictation Submitted 16 years 6 months ago by admin. This is a low preparation fun activity that works well with large classes, especially with young learners and teens. All your students need is a blank piece of paper and all the teacher needs is a little bit of imagination. Procedure

Who was William Shakespeare? William Shakespeare is known across the world as the writer of plays such as Romeo and Juliet and Hamlet, and as one of the most famous British people ever. Sometimes known simply as ‘the Bard’, he lived over four hundred years ago – not bad for the son of a man who made a living from making gloves. Part of the fascination is that despite being so well-known we don’t actually have much information about him; even his name is spelt differently each time it appears, ranging from ‘Shak-peare’ to ‘Shaksper’.

Shakespeare - Hamlet Hamlet, the Prince of Denmark, has come back from university to find that his father, the old king, is dead. His mother has married his father’s brother, Claudius, who is now king of Denmark. Hamlet is shocked that his mother has married so soon after his father’s death, and angry that she has married Claudius. The Seven Best Video Website for ELT Students - Kieran Donaghy As part of the launch of the website I’m organising a prize draw for my new book Film in Action. Everybody who subscribes to the website in the months of February and March will be entered into the draw. The Internet now offers students the opportunity to improve their lexical, listening and speaking skills through watching short film clips, videos and short films. Here are my seven favourite sites. English Central Possibly the best website for students to improve their vocabulary, listening, speaking and pronunciation.