Europe, and Its History 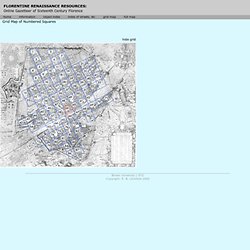 Vikings. Who were the Romans? Romans. Myths, Culture and Feelings from the Ancient Finland. Crusades. The Museum of the Netherlands - in Amsterdam. Sweden's History. Eurasia. Afro-Eurasian aspect of Earth Eurasia is the combined continental landmass of Europe and Asia,[1][2][3] with the term being a portmanteau of its two constituents. 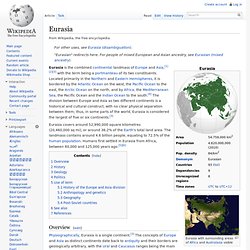 Located primarily in the Northern and Eastern Hemispheres, it is bordered by the Atlantic Ocean on the west, the Pacific Ocean to the east, the Arctic Ocean on the north, and by Africa, the Mediterranean Sea, the Pacific Ocean and the Indian Ocean to the south.[4] The division between Europe and Asia as two different continents is a historical and cultural construct, with no clear physical separation between them; thus, in some parts of the world, Eurasia is considered the largest of five or six continents.[3] Latvia's History. Sweden. Military history. Europe. What have the Romans done for us? Greek/Roman Mythology. Medieval warfare. Gunpowder warfare. Industrial warfare. Ελλάδ, Grèce, Grecia,Greece. Crusades. Trench Warfare Prior to World War 1 - Trench Warfare. Azores' History. Islands in southern Europe. 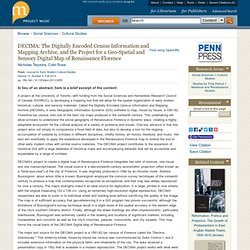 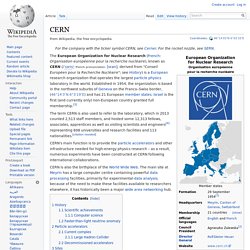 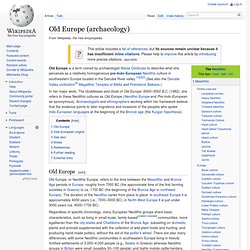 In her major work, The Goddesses and Gods of Old Europe: 6500–3500 B.C. (1982), she refers to these Neolithic cultures as Old Europe (Neolithic Europe and Pre-Indo-European as synonymous). Archaeologists and ethnographers working within her framework believe that the evidence points to later migrations and invasions of the peoples who spoke Indo-European languages at the beginning of the Bronze age (the Kurgan hypothesis). Marija Gimbutas investigated the Neolithic period in order to understand cultural developments in settled village culture in the southern Balkans, which she characterized as peaceful, matrilineal, and possessing a goddess-centered religion.

Spread of the Black Death in Europe (1346–53) The Black Death is thought to have originated in the arid plains of central Asia, where it then travelled along the Silk Road, reaching the Crimea by 1343.[6] From there, it was most likely carried by Oriental rat fleas living on the black rats that were regular passengers on merchant ships. 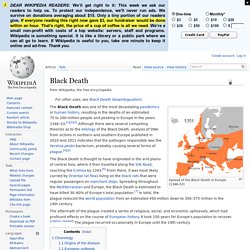 Spreading throughout the Mediterranean and Europe, the Black Death is estimated to have killed 30–60% of Europe's total population.[7] In total, the plague reduced the world population from an estimated 450 million down to 350–375 million in the 14th century. The aftermath of the plague created a series of religious, social, and economic upheavals, which had profound effects on the course of European history. 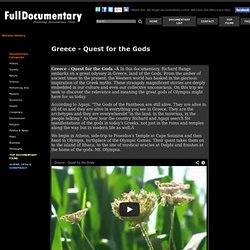 From the amber of ancient times to the present, the Western world has basked in the glorious inspiration of the Greek myths. These strangely magnificent stories are deeply embedded in our culture and even our collective unconscious. On this trip we seek to discover the relevance and meaning the great gods of Olympus might have for us today. HISTORY OF GREEK LITERATURE. List of 39 Famous Greek Philosophers and Statesmen who are known to have lived past the age of 70. Plato and his dialogues : home. Famous Greek People: Socrates, Plato, and Aristotle. Ancient Greek philosophy addressed an array of subjects, such as political philosophy or the study of liberty, justice, property, law, rights and law enforcement, metaphysics, ontology, rhetoric, aesthetics, ethics, logic and biology. 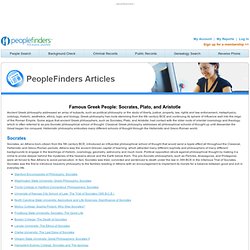 Greek philosophy has roots stemming from the 6th century BCE and continuing its sphere of influence well into the reign of the Roman Empire. Some argue that ancient Greek philosophers, such as Socrates, Plato, and Aristotle, had contact with the older roots of oriental cosmology and theology, which is often referred to as pre-Socratic philosophical school of thought.

GRECS. Greece / la Grèce. Ancient Greece for Kids - Main Index. Human Odyssey. ODYSSEY - interactive ancient civilizations. Map of Italy in 1700. Italian Republic (1946-) History of Italy. Poland. Poland. Poland i/ˈpoʊlənd/ (Polish: Polska), officially the Republic of Poland (Polish: Rzeczpospolita Polska), is a country in Central Europe, bordered by Germany to the west; the Czech Republic and Slovakia to the south; Ukraine, Belarus to the east; and the Baltic Sea and Kaliningrad Oblast (a Russian exclave) and Lithuania to the north. 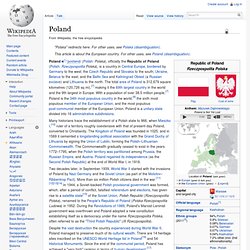 The total area of Poland is 312,679 square kilometres (120,726 sq mi),[7] making it the 69th largest country in the world and the 9th largest in Europe. With a population of over 38.5 million people,[7] Poland is the 34th most populous country in the world,[9] the sixth most populous member of the European Union, and the most populous post-communist member of the European Union. Poland is a unitary state divided into 16 administrative subdivisions. Portugal's History. Spain's History. War of Spanish Succession. 10 People Who Were Erased From History. History Throughout time, man has attempted to keep an accurate historical record of the events that came before them. 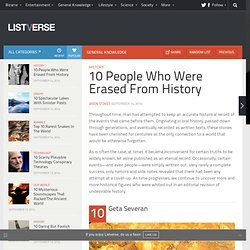 Originating in oral history, passed down through generations, and eventually recorded as written texts, these stories have been cherished for centuries as the only connection to a world that would be otherwise forgotten. As is often the case, at times it became inconvenient for certain truths to be widely known, let alone published as an eternal record.

Adolf Hitler. Adolf Hitler was born on 20th April, 1889, in the small Austrian town of Braunau near the German border. Both Hitler's parents had come from poor peasant families. His father Alois Hitler, the illegitimate son of a housemaid, was an intelligent and ambitious man and was at the time of Hitler's birth, a senior customs official in Lower Austria. Alois had been married before. In 1873 he had married Anna Glasl, the fifty-year-old adopted daughter of another customs collector. According to Ian Kershaw, the author of Hitler 1889-1936 (1998): "It is unlikely to have been a love-match. History - World Wars: Nazi Propaganda. Nazis. Triumph of Hitler: Nazis Boycott Jewish Shops. Just a week after the Enabling Act made Hitler dictator of Germany, a national boycott of Jewish shops and department stores was organized by Nazis under the direction of Propaganda Minister Joseph Goebbels.

The boycott was claimed to be in reaction to unflattering newspaper stories appearing in Britain and America concerning Hitler's new regime. The Nazis assumed most journalists were either Jewish or sympathetic to Jews and thus they labeled the bad publicity as "atrocity propaganda" spread by "international Jewry. " The boycott began at 10 a.m. on Saturday, April 1st, 1933, and lasted only a day. Nazi Brownshirts, the SA storm troopers, stood at entrances to Jewish shops, department stores, professional offices and various places of business.