Digitisation of books and other print media 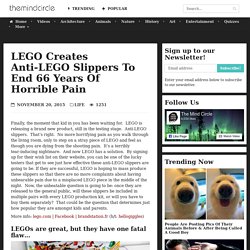 LEGO is releasing a brand new product, still in the testing stage. Anti-LEGO slippers. That’s right. No more horrifying pain as you walk through the living room, only to step on a stray piece of LEGO and feel as though you are dying from the shooting pain. LEGO Creates Anti-LEGO Slippers To End 66 Years Of Horrible Pain. 1977 blackout, NYC. A simple way how to tell if a battery is out of juice.

1971: Nationwide looked at scientific toys. BBC Archive does not consider any of these contraptions a toy. Self-driving cars are all the rage these days. Driverless tractors existed before it was cool. Climate Change Will the Middle East Become. The dark web: What it is and how it works. We often hear about the dark web being linked to terrorist plots, drug deals, knife sales and child pornography, but beyond this it can be hard to fully understand how the dark web works and what it looks like. 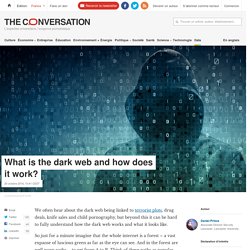 So just for a minute imagine that the whole internet is a forest – a vast expanse of luscious green as far as the eye can see. Nissan has been experimenting with self-organizing office chairs. Automation is not the end of the world. Here’s why. What keeps you up at night? 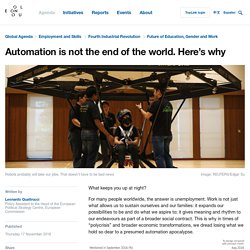 For many people worldwide, the answer is unemployment. Work is not just what allows us to sustain ourselves and our families: it expands our possibilities to be and do what we aspire to; it gives meaning and rhythm to our endeavours as part of a broader social contract. Vantablack is the blackest known substance. It absorbs up to 99.965% of visible light, hiding textures. Fun little video about the Bizarre Plan to Drain the Mediterranean: Atlantropa. Before the smart-phone, 1983. Dutch unveil giant outside vacuum cleaner to filter dirty air. Dutch inventors have unveiled what they called the world’s first giant outside air vacuum cleaner – a large purifying system intended to filter out toxic tiny particles from the atmosphere surrounding the machine. 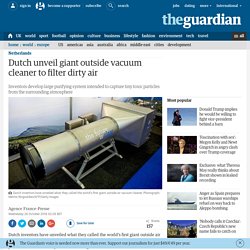 IT advances. Tech Fix - Agriculture. NASA-Patented Technology Purifies Vittori Lab's Greenery-Filled AirTrain. Even though trains are considered more eco-friendly than a pile of people driving their own cars, let’s face it – they aren’t exactly the freshest green places to hang out. 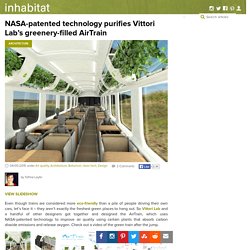 So Vittori Lab and a handful of other designers got together and designed the AirTrain, which uses NASA-patented technology to improve air quality using certain plants that absorb carbon dioxide emissions and release oxygen. Check out a video of the green train after the jump. Plants are natural carbon sponges, but the AirTrain’s greenery works more efficiently than ordinary plants. Why the Internet of Things could change politics. The ‘internet of things’ will bring major changes in many areas of life, including the political arena. 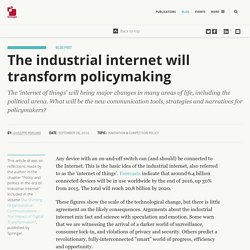 What will be the new communication tools, strategies and narratives for policymakers? Any device with an on-and-off switch can (and should) be connected to the Internet. This is the basic idea of the industrial internet, also referred to as the ‘internet of things’. Forecasts indicate that around 6.4 billion connected devices will be in use worldwide by the end of 2016, up 30% from 2015. The total will reach 20.8 billion by 2020. Japan tests out 'self-driving chairs' that take the pain out of queuing. Tokyo may be home to tens of thousands of great places to eat, yet many diners still have to wait patiently in line for a table at the most popular restaurants – until now. 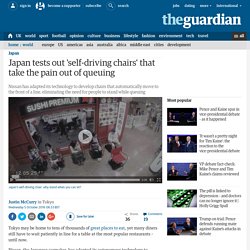 Nissan, the Japanese carmaker, has adapted its autonomous technology to develop “self-driving” chairs that not only enable weary diners to take the weight off their feet, but to zip to the front of the queue without moving a muscle. This MIT camera can read books. Even when they're closed. MIT/YouTube Books that are centuries old are often too delicate for museums to open, read, or explore without causing damage. 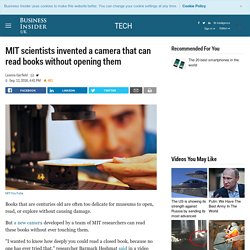 But a new camera developed by a team of MIT researchers can read these books without ever touching them. "I wanted to know how deeply you could read a closed book, because no one has ever tried that," researcher Barmark Heshmat said in a video published by the MIT Media Lab. A paper about the new camera was published in "Nature Communication" and notes that it uses terahertz radiation, which falls between the microwave and infrared spectrums.