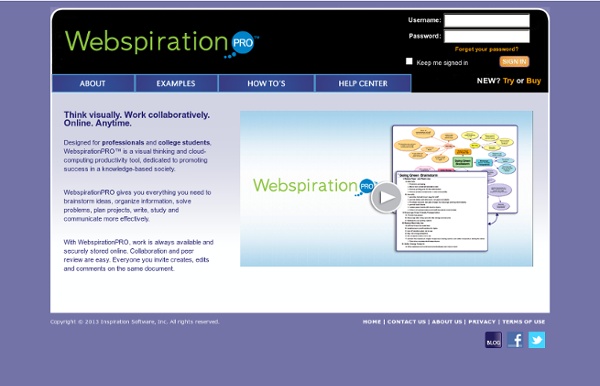 Designed for professionals and college students, WebspirationPRO™ is a visual thinking and cloud-computing productivity tool, dedicated to promoting success in a knowledge-based society. WebspirationPRO gives you everything you need to brainstorm ideas, organize information, solve problems, plan projects, write, study and communicate more effectively. With WebspirationPRO, work is always available and securely stored online. Collaboration and peer review are easy. Everyone you invite creates, edits and comments on the same document.

Braindump Braindump is a tool to dump and organize the content of your brain (ideas, drawings, images, texts…) to your computer. It works by allowing to create and edit whiteboards, which are infinite canvas on which you can add texts, images, charts, drawings… You can also organize your ideas into diagrams and flowcharts: Scapple for Mac OS X Rough It Out Scapple doesn’t force you to make connections, and it doesn’t expect you to start out with one central idea off of which everything else is branched. There’s no built-in hierarchy at all, in fact—in Scapple, every note is equal, so you can connect them however you like. The idea behind Scapple is simple: when you are roughing out ideas, you need complete freedom to experiment with how those ideas best fit together. It’s Scapple Simple Creating notes is as easy as double-clicking anywhere on the canvas and then typing; making connections between ideas is as painless as dragging and dropping one note onto another.

Top iPad Apps for Student Creativity My school is currently 1:1 iPads in Grades 1, 4, and 5, and next year we're expanding that to include Grades 2 and 3. Like most schools, we went through a phase where we tried out LOTS of different apps, but over time, we whittled those down into our Core Apps, ones that are flexible and powerful enough to be used in every subject all day long. One of the keys for me is that these apps can be used by students to CREATE things, not just consume things. 5 Ways to Make Your To-Do Lists More Effective To-do lists seem pretty straightforward: A list of all of the tasks you plan to accomplish during any given day or week. And, really, there are few things more satisfying than drawing lines through each entry. Progress! But, many times, they balloon to unrealistic levels, and we end up feeling overwhelmed and ineffective. That’s usually because we’re using them as a catch-all for every task that’s thrown at us.

Søren Kierkegaard (1813–1855): Either/Or Summary Kierkegaard wrote Either/Or soon after receiving his doctorate and breaking his engagement with Regine Olsen. Either/Or is his first major work and remains one of his most widely read. Kierkegaard wrote the book under a series of false names, or pseudonyms. The 36 best tools for data visualization It's often said that data is the new world currency, and the web is the exchange bureau through which it's traded. As consumers, we're positively swimming in data; it's everywhere from labels on food packaging design to World Health Organisation reports. As a result, for the designer it's becoming increasingly difficult to present data in a way that stands out from the mass of competing data streams. One of the best ways to get your message across is to use a visualization to quickly draw attention to the key messages, and by presenting data visually it's also possible to uncover surprising patterns and observations that wouldn't be apparent from looking at stats alone. And nowadays, there's plenty of free graphic design software to help you do just that.

Mind Mapping Software Mind mapping software continues to evolve and the latest generation is really, really, really good. I first tried software mind mapping with MindJet's MindManager X5 Pro. The interface was intuitive (click insert or enter to add topics), formatting was easy, and I liked all of the options available to customize my maps (color, type of connectors, line styles, relationships, callouts, arrows, icons, and much more). MindJet's newest version, MindManager 7, is amazing. I am particularly impressed with the range of new map options. Divided into style and map templates, MindJet offers eighteen different types of maps from their template set, including organization charts, a week-at-a-glance map, meeting map, a to do list, resume, and many more.

8 Things Everybody Ought to Know About Concentrating “Music helps me concentrate,” Mike said to me glancing briefly over his shoulder. Mike was in his room writing a paper for his U.S. History class. On his desk next to his computer sat crunched Red Bulls, empty Gatorade bottles, some extra pocket change and scattered pieces of paper. In the pocket of his sweat pants rested a blaring iPod with a chord that dangled near the floor, almost touching against his Adidas sandals.

Cyberhero League In 2012, psychologist, Dana Klisanin, Ph.D., introduced the scientific community to the "cyberhero" a new archetype that stands in stark constrast to the "cyberbully". Rather than seeking to harm others, the cyberhero uses digital technology to help other people, animals, and the environment. In this award-winning interactive gaming adventure, cyberheroes show-off their strengths and skills. (For more about the science of cyberheroes go to the * at the bottom of this page). Don a digital cape and take on 15 arch-enemies in a battle to save the future of the world.

25 Web Designs with Modular Content Block Layouts The grid based content block layout has become popular for many types of website, especially portfolios and inspiration ‘pinning’ sites. These sites have a series of tiling blocks that fill the page, often in a kind of modular format where they rearrange themselves depending on the viewport size. This post rounds up a collection of 25 cool website designs that all feature a modular style content block layout.

BigPicture: Mind Mapping and Data Exploration for Microsoft Excel - Palisade BigPicture Mind Mapping and Data Exploration for Microsoft Excel The Beta release of BigPicture is available. BigPicture is a diagramming software add-in for Microsoft Excel. With BigPicture, you can create mind maps to organize thoughts and ideas, or create dynamic maps from any type of spreadsheet data. Recollective Baseline Better Decisions From Deeper Insights Until now there hasn't been an easy and accessible way to ask and understand why people act and think as they do. Professional researchers answer this question by examining behaviours and emotional reactions through in-person focus groups. You may gauge this type of learning by hosting meetings, sending emails or chatting by the water cooler. Recollective Baseline brings this process online and gives you access to the same tool the Pros use.

Time Management Tips: How to Find the Right Mindset to Succeed With Time Management For the past several years I have worked with time management techniques such as lists, prioritization, planning and so on. But it wasn’t until I adopted a Quadrant 2 mindset that I really started seeing results. The phrase “Quadrant 2” comes from Stephen Coveys book The 7 Habits of Highly Effective People .