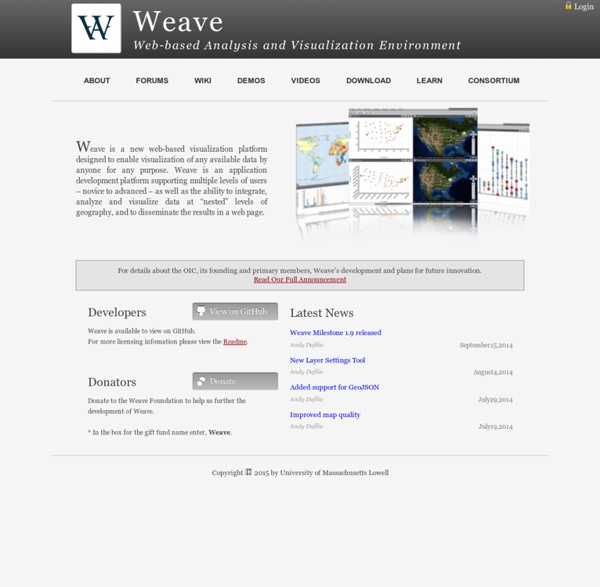 40 must-see vídeos about data visualization and infographics Our selection of keynotes, TED Talks and interviews by some of the top names in the field (The Joy of Stats, by Hans Rolling, one of the must-see videos) After the success of our collection of data visualization presentations a few weeks ago, we decided to push even further our research of multimedia resources and take the risk of selecting some videos. And we say risk, because the abundance of data visualization videos on the Internet is simply mind-blowing. Just think about it: How many events are there about information visualization? Tutorials How to Make a State Grid Map in R Something of a cross between a reference table and a map, the state grid provides equal space to each state and a semblance of the country to quickly pick out individual states. How to Make Animated Line Charts in R Sometimes it's useful to animate the multiple lines instead of showing them all at once.

Vespucci OSM Editor - Google Apps sur l'Android Market This is a 10 days Trial for MapPad PRO. MapPad Pro is providing multi-purpose mapping solution allowing location capture and data management. With MapPad, you can capture and share your tracks and measurements with number of well known cloud providers like G-Drive, Dropbox, Google Fusion Tables or export results to the local geo files like GPX or KML.

Powerful Open Source Data Visualization plugins – Part 1 Analyzing data online can be a tedious task & when you have tons of data to share online – it could be challenging to make it readable & at the same time interesting for the user to understand the data. In such scenarios data visualization plugins can come in handy to visually represent your data to the user than just presenting it as plain numbers. The main goal of data visualization is to communicate information clearly and effectively through graphical means. There are numerous Javascript plugins on the web which can help in presenting your data in multiple formats & at the same time make it interactive for the user to digest the info being shared easily.

Online Charts Builder Hohli Online Charts Builder New version: Try new version of Charts Builder, it based on new Google Charts API Load From Image URL: Chart Data can't equal to original, but very similar to it. 37 Data-ish Blogs You might not know it, but there are actually a ton of data and visualization blogs out there. I'm a bit of a feed addict subscribing to just about anything with a chart or a mention of statistics on it (and naturally have to do some feed-cleaning every now and then). In a follow up to my short list last year, here are the data-ish blogs, some old and some new, that continue to post interesting stuff.

SWF Charts > Introduction XML/SWF Charts is a simple, yet powerful tool to create attractive charts and graphs from XML data. Create an XML source to describe a chart, then pass it to this tool's flash file to generate the chart. The XML source can be prepared manually, or generated dynamically using any scripting language (PHP, ASP, CFML, Perl, etc.) XML/SWF Charts makes the best of both the XML and SWF worlds. XML provides flexible data generation, and Flash provides the best graphic quality. Features: OpenFixMap - Google Apps sur l'Android Market OpenFixMap is an open source application that shows OpenStreetMap errors. OpenFixMap is built to fetch errors from different places, is can for example fetch error reported by Users on OpenStreetBugs. It can also take errors from machine computed error lists as KeepRight. There are plan to support other platforms so, if your favorite plateforms isn't already supported, is may be added in a near future by me or by one of your future patch ;)