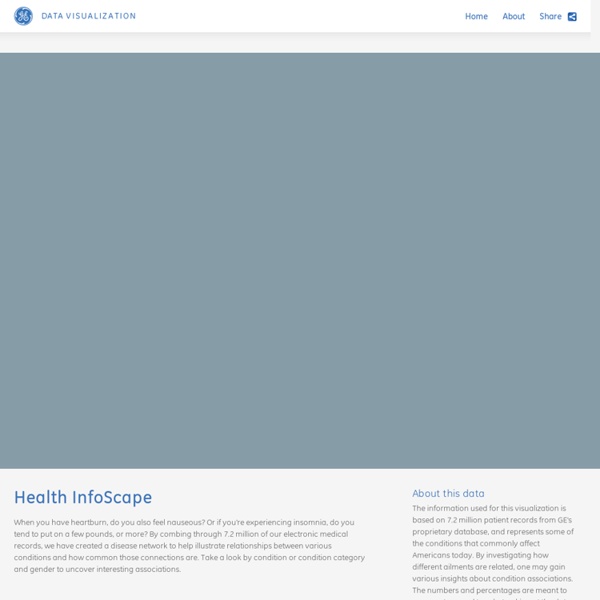 When you have heartburn, do you also feel nauseous? Or if you're experiencing insomnia, do you tend to put on a few pounds, or more? By combing through 7.2 million of our electronic medical records, we have created a disease network to help illustrate relationships between various conditions and how common those connections are. Take a look by condition or condition category and gender to uncover interesting associations. About this data The information used for this visualization is based on 7.2 million patient records from GE's proprietary database, and represents some of the conditions that commonly affect Americans today. Share Downloads Download Application Design Partner MIT SENSEable City Lab

Xiaoji Chen's Design Weblog » Health Infoscape Senseable City Lab partnered with GE to create new ways of understanding human health. Our team created a disease network by analyzing data from over 7.2 million anonymized electronic medical records, taken from between January 2005 and July 2010, across the United States. Barabasi’s lab has published their disease networks generated by genetic similarity in 2007. In our first attempt, diseases/disorders are considered associated if a patient has got them at the same time or sequentially. The resulting network gives us new insight as to how closely connected some seemingly un-related health conditions might be. I made this interactive map for the general public to browse the data. It is a huge network. The network vis was made with Flex and the visualization library Flare, and the user interface with Flash CS4. Team: (Senseable) Carlo Ratti, Eric Baczuk, Dominik Dahlem, Xiaoji Chen (General Electric) Camille Kubie, Aimee Atkinson Tools used: Flash, Flex, Flare, R Similar Posts

How to Make an Interactive Network Visualization Networks! They are all around us. The universe is filled with systems and structures that can be organized as networks. Recently, we have seen them used to convict criminals, visualize friendships, and even to describe cereal ingredient combinations. In this tutorial, we will focus on creating an interactive network visualization that will allow us to get details about the nodes in the network, rearrange the network into different layouts, and sort, filter, and search through our data. In this example, each node is a song. Try out the visualization on different songs to see how the different layouts and filters look with the different graphs. Technology This visualization is a JavaScript based web application written using the powerful D3 visualization library. jQuery is also used for some DOM element manipulation. Quick CoffeeScript Notes Functions First and foremost, This is what a function looks like: So the input parameters are inside the parentheses. Indentation matters Setting Up Data

Xiaoji Chen's Design Weblog » Power Chart of Chinese Provinces Economist just posts an interactive visualization Chinese Equivalents on their website. It’s a very interesting approach. (Somehow I feel it has an psychological side-effect by saying one province is equivalent to France while it’s neighbor is equivalent to Kenya, though noted in terms of population.) I got curious how we can visualize how actually important the Chinese provinces are. Newman’s code on his website deals with raster image only. You can recognize in this map how unbalanced China is – the west is barely occupied due to challenging natural environment, and population keeps flowing from the middle towards the economic centers (Beijing and the southeast coast). What about looking at the provinces from a social network’s perspective? Tools used: Processing, Tulip, Illustrator Similar Posts

Graphical visualization of text similarities in essays in a book | munterbund.de The problem A collection of essays is collated for readers with visualizing graphics. The graphics should both serve as a thematic and structural overview of each text, and pose the essay in question in relation to the other essays in the book. They should be both an abbreviation of the text and the key to decoding the complex issues under discussion. The difficulty in developing appropriate graphics arises from the level of discussion of the key themes. The basis of visualization Detail view of graphic for Raphael Perret A data graphic – like a bar chart – depicts quantifiable data. Different ways of data selection A significant constraint in developing appropriate graphics arises from the manner of data collection. It is possible to divide data extracted from essays into two main groups: data that must be collected ”manually” (in our case, using human intelligence), and data that can be captured automatically by machine intelligence. Keywords Metadata Statistical data Structural data

Data Visualization Software | Tulip The Best Tools for Visualization Visualization is a technique to graphically represent sets of data. When data is large or abstract, visualization can help make the data easier to read or understand. There are visualization tools for search, music, networks, online communities, and almost anything else you can think of. Whether you want a desktop application or a web-based tool, there are many specific tools are available on the web that let you visualize all kinds of data. Here are some of the best: Visualize Social Networks Last.Forward: Thanks to Last.fm's new widget gallery, you can now explore a wide selection of extras to extend your Last.fm experience. Last Forward Friends Sociomap: Friends Sociomap is another Last.fm tools that generates a map of the music compatibility between you and your Last.fm friends. Fidg't:Fidg't is a desktop application that gives you a way to view your networks tagging habits. Fidg't The Digg Tools: One more: Digg Radar . YouTube: Visualize Music Musicovery Last.fm music visual tools: Amazon Data

How To Use Simple Excel Functions for Data Analysis In this series of video tutorials, ICIJ reporter Kate Willson demonstrates four basic yet essential Excel functions to assist with data analysis during investigative reporting. Want to see any other video tutorials about Computer-Assisted Reporting? Please let us know either in the comments below or at contact@icij.org. Interested in viewing more of our investigative reporting video tutorials? Subscribe to ICIJ's YouTube channel to be the first to know when they are released. Auto Fill We use Excel's "Auto Fill" function all the time when preparing data for analysis. Sorting and Filtering Sorting and Filtering are great and easy ways to look at your data. Concatenation Using Excel to join data from multiple cells is a powerful tool -- particularly if you're writing lengthy SQL queries. Pivot Tables You don't always need a complex SQL query to analyze data. Thanks for watching.

Features Gephi is a tool for data analysts and scientists keen to explore and understand graphs. Like Photoshop™ but for graph data, the user interacts with the representation, manipulate the structures, shapes and colors to reveal hidden patterns. The goal is to help data analysts to make hypothesis, intuitively discover patterns, isolate structure singularities or faults during data sourcing. It is a complementary tool to traditional statistics, as visual thinking with interactive interfaces is now recognized to facilitate reasoning. This is a software for Exploratory Data Analysis, a paradigm appeared in the Visual Analytics field of research. Real-time visualization Profit from the fastest graph visualization engine to speed-up understanding and pattern discovery in large graphs. Layout Layout algorithms give the shape to the graph. Metrics The statistics and metrics framework offer the most common metrics for social network analysis (SNA) and scale-free networks. Networks over time Input/Output

Raphaël—JavaScript Library The Rise of Visual Browsing This time last year at the annual TED conference, Microsoft Live Labs demoed an immersive media-browsing tool that literally caused gasps in the audience. Seadragon/Photosynth is exactly the kind of ’3-D web’ experience people were hyping in the late 1990s, along with VRML (Virtual Reality Modeling Language), as though they were poised to go mainstream. Instead, many users rejected the over-use of tools like Flash, while Google’s simple text-based results became the gold standard. Discussion of ‘visual browsing’ has heated up again, though. It will be interesting to see what kinds of interactions the public adapts to and which they reject. Here are more recent examples I’ve been seeing, some genuinely useful, some experimental and less practical. Cover Flow In late 2004, Andrew Enright first designed a visual browsing method which later became Apple’s Cover Flow. Enright was nostalgic for flipping through the used bins at record stores and mentally cataloging the albums based on cover art: