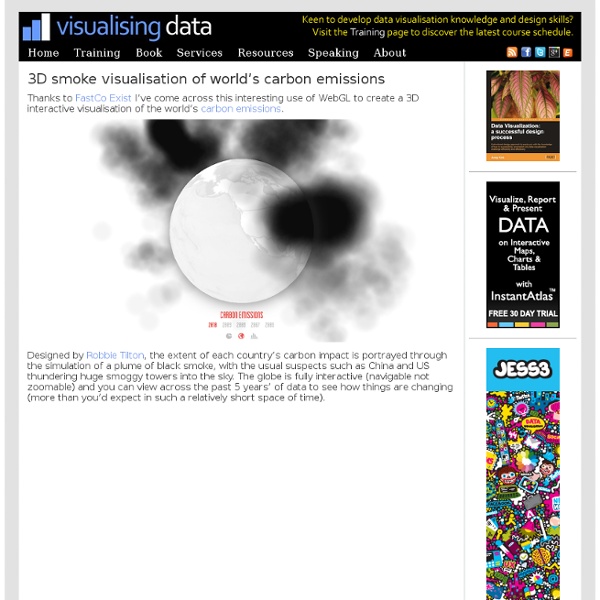 Datavisualization.ch Recovered moritz.stefaner.eu - Müsli Ingredient Network Hover to pause, click to open full resolution The end result was a straight-forward radial network visualization, with the ingredients grouped by category (base mueslis, fruit, nuts, sweets, etc.). Some niceties have gone into the line rendering, with gradient strokes (depending on the categories of the connected nodes) and white stroke outlines to facilitate visual perception of the depth stacking. Some interesting insights can be gained from this visualization: Fruit are the most popular ingredient, and are often combined with each other. Sweets and nuts, however, are rarely combined. Mango is often combined with coconut (Kokosnuß) or pineapple (Ananas), although these two don't tend to be used together. Enter... the matrix But, as so often, a certain visualization form often highlights specific insights, but neglects others. During development, the view that helped us most with identifying all the little interesting stories in the data, was in fact a matrix visualization:

FlowingData | Data Visualization, Infographics, and Statistics New Technological Art Award 2014 - Home Pictures of Numbers Elastic lists Background: Facet Browsing Facet browsers make different aspects of the underlying data accessible in parallel. Selecting one of the metadata values, and thus filtering the result set, restricts the available metadata values only to those occurring in the results. Consequently, the user is visually guided through an iterative process of query refinement and expansion, never encountering situations with zero results. Facet browsing applications impose no restrictions, in which order, or in which granularity filters are applied on a result set. This equal treatment of multiple dimensions differs from, e.g. typical web site structures or file systems, where a single taxonomy is the pre–dominant organization principle, and other metadata are only supplements for sorting or filtering. Elastic Lists Elastic lists the navigation principle of facetted browsing, but enhance the information presentation with respect to the following features: Visualize weight proportions Animated transitions

North Line GIS, LLC | Geographical Solutions Digital Milieu What is Visualization? A Definition What is a visualization? The word is problematic, and there have been very few definitions that try to define this field we are working in. More importantly: what is not a visualization? Definition The following are three minimal criteria that any visualization has to fulfill to be considered a pragmatic visualization. Based on (non-visual) data. This definition was published in a paper on Visualization Criticism, part of which I discussed in an earlier posting. Examples The following examples show how these criteria provide a clear separation of visualization (in the sense of scientific and information visualization) and other kinds of data transformations that result in images. MilkDrop is one of the most impressive music visualizers. VisualIDs are a very clever idea to help the user tell files apart: they produce images from the names of files to produce visually similar (but still distinct) icons for files with similar names. Conclusion 小草莓 has translated this article into Chinese!

Antique Maps and Charts Current - Edith-Russ-Haus für Medienkunst Renate Buschmann Claudia Giannetti Hermann Nöring Andrea Sick The grants from the Foundation of Lower Saxony at the Edith-Russ-Haus for Media Art 2014, each endowed with €10,000, are awarded to: Derek Holzer, Delilah Too Sound art installation Ivar Veermäe, Center of Doubt Audiovisual installation Emma Wolukau-Wanambwa, Paradise Mixed-media installation Grounds for the Jury’s Decision: With his project DELILAH TOO, the Berlin-based American sound artist Derek Holzer conducts media archeological research toward the development of a language cryptography instrument on the basis of a vocoder. With his experimental sound art project, Derek Holzer not only transforms an instrument from the early history of electronic music for current use in producing analogue compositions, he also creates an artistic transmission of the current debate concerning the protection of the personal and the boundaries of the public sphere.