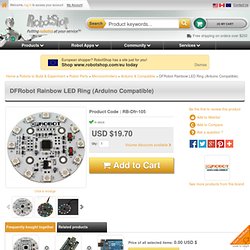 Each led on the ring can be controlled separately on its brightness and colors (RGB). Arduino Buying Guide. Let’s face it, there are a lot of different Arduino boards out there. 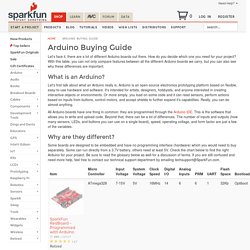 How do you decide which one you need for your project? With this table, you can not only compare features between all the different Arduino boards we carry, but you can also see why these differences are important. Pinguino, open source hardware electronics prototyping platform based on 8- and 32-bit PIC from Microchip. The Maximite Computer - Dontronics. Arduino-tiny - ATtiny core for Arduino. Arduino-Tiny is an open source set of ATtiny "cores" for the Arduino platform. 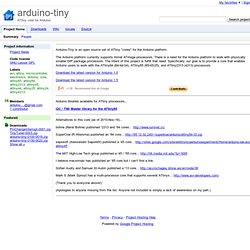 The Arduino platform currently supports Atmel ATmega processors. There is a need for the Arduino platform to work with physically smaller DIP package processors. The intent of this project is fulfill that need. Specifically, our goal is to provide a core that enables Arduino users to work with the ATtiny84 (84/44/24), ATtiny85 (85/45/25), and ATtiny2313 (4313) processors. Download the latest version for Arduino 1.0 Download the latest version for Arduino 1.5. Arduino Comparison Chart - CMiYC Labs, Inc. When getting started with the Arduino, the shear number of board options can be intimidating. 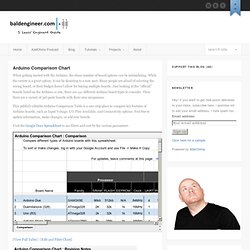 While the variety is a great option, it can be daunting to a new user. Many people are afraid of selecting the wrong board, or their budget doesn’t allow for buying multiple boards. Just looking at the “official” boards listed on the Arduino.cc site, there are 14+ different Arduino board types to consider. Then there are a variety of 3rd-party boards with their own uniqueness.

This publicly editable Arduino Comparison Table is a one-stop place to compare key features of Arduino boards, such as Input Voltage, I/O Pins Available, and Connectivity options. Visit the Google Docs Spreadsheet to use filters and sort by the various parameters. [View Full Table] | [Edit and Filter Chart] Maker Shed, brought to you by the staff of MAKE and Maker Faire. ArduinoBoardLeonardo. Overview The Arduino Leonardo is a microcontroller board based on the ATmega32u4 (datasheet). 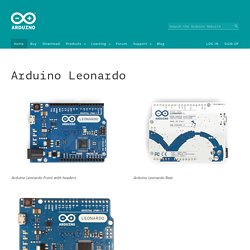 It has 20 digital input/output pins (of which 7 can be used as PWM outputs and 12 as analog inputs), a 16 MHz crystal oscillator, a micro USB connection, a power jack, an ICSP header, and a reset button. It contains everything needed to support the microcontroller; simply connect it to a computer with a USB cable or power it with a AC-to-DC adapter or battery to get started.

The Leonardo differs from all preceding boards in that the ATmega32u4 has built-in USB communication, eliminating the need for a secondary processor. This allows the Leonardo to appear to a connected computer as a mouse and keyboard, in addition to a virtual (CDC) serial / COM port. Summary Schematic & Reference Design. CHIPPER BOARD. For sale Created to make ATtiny chips easier to work with the Chipper Shield – a custom PCB – is on its 3rd generation and encompasses all of the core components to get your next project up and running. 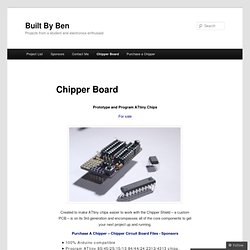 Purchase A Chipper – Chipper Circuit Board Files - Sponsors 100% Arduino compatibleProgram ATtiny 85/45/25/15/13 84/44/24 2313/4313 chips.Debug your program through 2 LEDs and broken out sensor port.Compatible with either an Arduino board or AVR programmerHouse sensors on the proto area of the board with access to broken out power and ground.Reset a chip mid-program through the reset button. Chipper Board Companion Guides: Datasheets: Photos: Like this: Like Loading... Geoff's Projects - The Colour Maximite. The Colour Maximite is a small and versatile single chip computer running a full featured BASIC interpreter with 128K of working memory and eight colours on a VGA monitor. 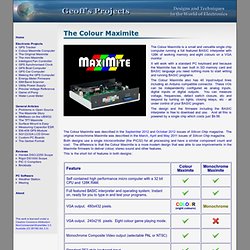 It will work with a standard PC keyboard and because the Maximite has its own built in SD memory card and BASIC language you need nothing more to start writing and running BASIC programs. The Colour Maximite also has 40 input/output lines including an Arduino compatible connector. These I/Os can be independently configured as analog inputs, digital inputs or digital outputs. You can measure voltage, frequencies, detect switch closure, etc and respond by turning on lights, closing relays, etc - all under control of your BASIC program. The design and the firmware including the BASIC interpreter is free to download and use. The Colour Maximite was described in the September 2012 and October 2012 issues of Silicon Chip magazine. This is the short list of features in both designs: Other useful pages: mmlib (at) geoffg.net. Adafruit Arduino Selection Guide.