3.7 Analysing the strategic position of a business

Videos & Audio. Challenger Aldi considers a move into British online sales. Aldi is considering moving into online retailing in the UK, and possibly elsewhere, opening up a new front in the discounter’s challenge to the major supermarkets. 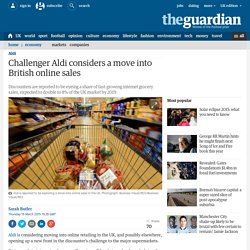 Fast growth in internet orders as well as at small local stores has been helping the UK’s “big four” supermarkets – Asda, Tesco, Sainsbury’s and Morrisons – to offset falls in sales at their large supermarkets. Online grocery sales are expected to be the fastest growing part of the market in the UK, more than doubling in value between 2014 and 2019 to £17bn, to make up 8% of the market. But until now the discounters Aldi and Lidl were thought unlikely to begin trading online as their business model is based on keeping things simple and efficient to keep prices for shoppers low. Aldi has sold alcoholic drinks via the internet in Australia since 2013, but it has yet to try any online service in Europe. Sainsbury's to convert supermarkets into non-food space.

Converting space from food to non-food reflects the dramatic changes in the grocery industry and the pressure on the “big four” supermarkets, which also includes Tesco, Asda and Wm Morrison. 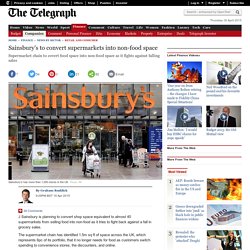 The supermarket chains are closing stores and scrapping new store developments as they try to cut costs and react to a fall in sales. Sainsbury’s reported a pre-tax loss of £290m in its half-year results and warned that its like-for-like sales are likely to be falling for years. It had previously said it was concerned that 25pc of its shops were “underutilised”. Tesco is expected to unveil a significant annual loss next week by booking a one-off impairment charge, estimated to be £3bn, on the value of its supermarkets. The share of grocery spending that takes place in supermarkets is falling, according to industry figures. Sainsbury’s also revealed on Wednesday that it is trialling a new app that helps customers shop in a supermarket. UK supermarkets dupe shoppers out of hundreds of millions, says Which? The competition regulator is to scrutinise allegations that UK supermarkets have duped shoppers out of hundreds of millions of pounds through misleading pricing tactics. 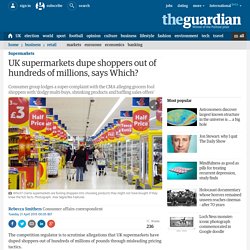 Which? Has lodged the first ever super-complaint against the grocery sector after compiling a dossier of “dodgy multi-buys, shrinking products and baffling sales offers” and sending it to the Competition and Markets Authority. The consumer group claims supermarkets are pushing illusory savings and fooling shoppers into choosing products they might not have bought if they knew the full facts. E.ON to pay 7.75 million pound penalty over UK billing. Top News E.ON to pay 7.75 million pound penalty over UK billing Thu, Apr 02 08:38 AM BST LONDON (Reuters) - Utility E.ON (EONGn.DE) will pay a 7.75 million pound penalty following billing errors which could have affected 48,000 British customers, the company said on Thursday. 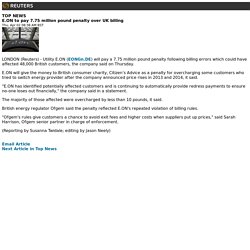 E.ON will give the money to British consumer charity, Citizen’s Advice as a penalty for overcharging some customers who tried to switch energy provider after the company announced price rises in 2013 and 2014, it said. Lloyds has been let off too lightly, but would Labour really rein in the bank? It is 14 May, the day of Lloyds Banking Group’s annual meeting. 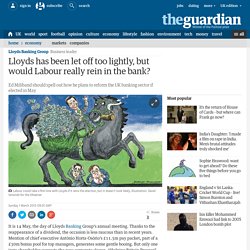 Thanks to the reappearance of a dividend, the occasion is less raucous than in recent years. Mention of chief executive António Horta-Osório’s £11.5m pay packet, part of a £30m bonus pool for top managers, generates some gentle booing. But only one irate shareholder suggests the new corporate slogan, “Helping Britain Prosper” should read “Helping Horta-Osório Prosper”. But, as chairman Lord Blackwell calls for votes on the resolutions before the meeting, there is drama. A nervous figure gets to his feet to announce himself as the representative of UK Financial Investments, the body managing the state’s 24% stake in Lloyds. UKFI, he says, had indicated previously that it would vote in favour of the bank’s remuneration report and pay policy. Within minutes, a statement from new prime minister Ed Miliband is released: “My government will support and encourage responsible capitalism. 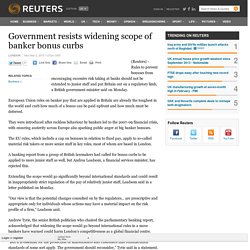 European Union rules on banker pay that are applied in Britain are already the toughest in the world and curb how much of a bonus can be paid upfront and how much must be deferred. They were introduced after reckless behaviour by bankers led to the 2007-09 financial crisis, with ensuring austerity across Europe also sparking public anger at big banker bonuses. The EU rules, which include a cap on bonuses in relation to fixed pay, apply to so-called material risk takers or more senior staff in key roles, most of whom are based in London.