Don't ban laptops in class, talk to students via Facebook. Technology is an established part of the lives of students. 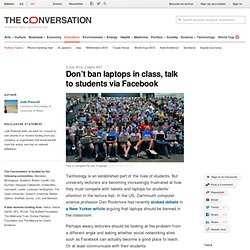 But university lecturers are becoming increasingly frustrated at how they must compete with tablets and laptops for students' attention in the lecture hall. In the US, Dartmouth computer science professor Dan Rockmore has recently stoked debate in a New Yorker article arguing that laptops should be banned in the classroom.

Perhaps weary lecturers should be looking at the problem from a different angle and asking whether social networking sites such as Facebook can actually become a good place to teach. Or at least communicate with their students. Some research has argued that Facebook and other social media networks have educational potential. Other South African research investigating student use of Facebook and lecturer engagement with students via the platform found lecturers saw it as easier and quicker way to contact students. Research exploring Twitter in academia has also found it is a useful and viable learning tool.

Colleges must stop delivering irrelevant courses with poor careers advice. Sir Michael Wilshaw’s recent comment that further education students “are not being well served” by vocational courses has thrown light on a dysfunctional system that is woefully out of step with industry trends. 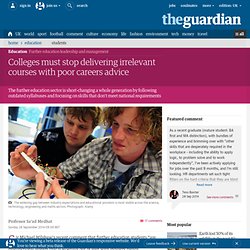 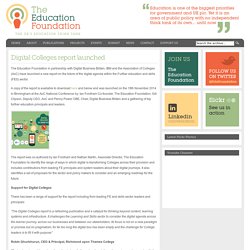 A copy of the report is available to download here and below and was launched on the 18th November 2014 in Birmingham at the AoC National Conference by: Ian Fordham Co-founder, The Education Foundation; Gill Clipson, Deputy CEO, AoC and Penny Power OBE, Chair, Digital Business Britain and a gathering of top further education principals and leaders.

The report was co-authored by Ian Fordham and Nathan Martin, Associate Director, The Education Foundation to identify the range of ways in which digital is transforming Colleges across their provision and includes contributions from leading FE principals and system leaders about their digital journeys. Support for Digital Colleges Robin Ghurbhurun, CEO & Principal, Richmond upon Thames College. FELTAG-REPORT-FINAL.pdf. Education Technology Action Group. College ‘no longer a dirty word’ A rebranding exercise at Lewisham Southwark College cost almost £290,000 and the result — Lesoco — could be dropped after less than two years. 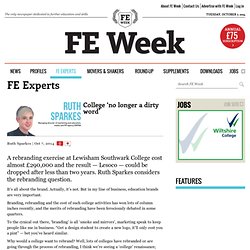 Ruth Sparkes considers the rebranding question. It’s all about the brand. Actually, it’s not. But in my line of business, education brands are very important. Branding, rebranding and the cost of such college activities has won lots of column inches recently, and the merits of rebranding have been ferociously debated in some quarters. To the cynical out there, ‘branding’ is all ‘smoke and mirrors’, marketing speak to keep people like me in business. Why would a college want to rebrand? Binder-9-reduced.pdf. Adult vocational education: challenges over the next decade - Consultations. 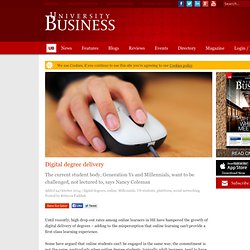 Some have argued that online students can't be engaged in the same way, the commitment is not the same, particularly when online degree students, typically adult learners, tend to have more distractions in terms of work and family commitments. But why? Digital technology is now embedded as part of daily life, familiar and practical. Further education and skills reform plan 'New Challenges, New Chances’: evaluation. Bis-14-841-government-response-to-recommendations-from-the-FELTAG-action-plan.pdf. 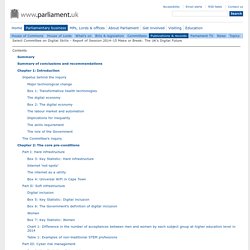 The case for agile pedagogy. Learning computational thinking also teaches transferable ways of solving problems and exploring situations which stretch way beyond the computer suite. Photograph: Juice Images / Alamy/Alamy Policy makers, industry and many teachers are eager that pupils should learn more about computing. This includes learning how to write computer programs, but also "computational thinking", a transferable way of solving problems and exploring situations, which has wide applications across and beyond the curriculum.

In short, as pupils learn to program computers and the principles of computer science they start to bring the unique insights of algorithms, abstraction and the like to other fields. Cloud Based Technology. Localism Agenda. What’s behind Localism and the new Planning System The Localism Bill 2010 is one part of a wider philosophy that the Coalition has adopted, spanning more than just the planning system. 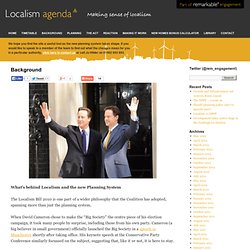 When David Cameron chose to make the “Big Society” the centre piece of his election campaign, it took many people by surprise, including those from his own party. Cameron (a big believer in small government) officially launched the Big Society in a speech in Manchester shortly after taking office. His keynote speech at the Conservative Party Conference similarly focussed on the subject, suggesting that, like it or not, it is here to stay.

E-learning as a competitive advantage 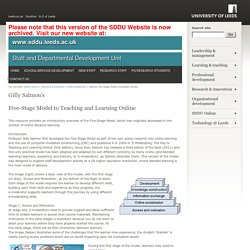