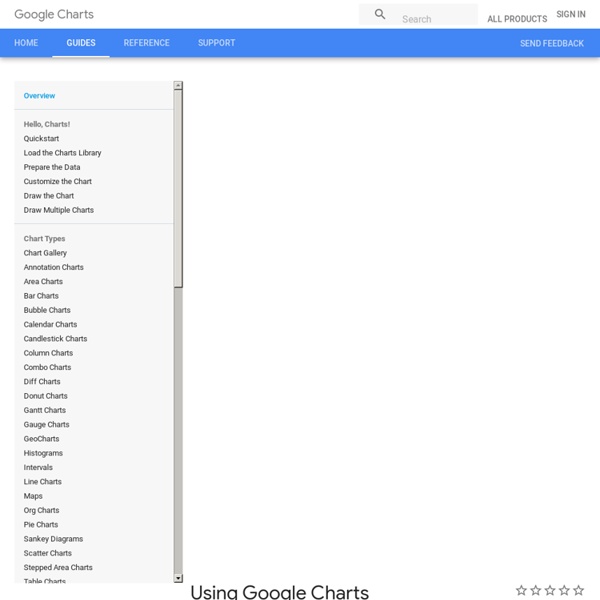 Google Charts provides a perfect way to visualize data on your website. From simple line charts to complex hierarchical tree maps, the chart gallery provides a large number of ready-to-use chart types. The most common way to use Google Charts is with simple JavaScript that you embed in your web page. You load some Google Chart libraries, list the data to be charted, select options to customize your chart, and finally create a chart object with an id that you choose. Then, later in the web page, you create a <div> with that id to display the Google Chart. That's all you need to get started. Charts are exposed as JavaScript classes, and Google Charts provides many chart types for you to use. All chart types are populated with data using the DataTable class, making it easy to switch between chart types as you experiment to find the ideal appearance. Ready to create your first chart?

Cube Time Series Data Collection & Analysis Cube is a system for collecting timestamped events and deriving metrics. By collecting events rather than metrics, Cube lets you compute aggregate statistics post hoc. It also enables richer analysis, such as quantiles and histograms of arbitrary event sets. Cube is built on MongoDB and available under the Apache License on GitHub. Pizza Pie Charts Pizza is an easy to use plugin. It's built with our responsive framework Foundation so you can quickly install it into your current Foundation project. Water BuffaloBisonSheepGoatShetland Pony

15 Free Infographic Templates Wouldn't it be great if creating infographics was as simple as writing regular old text-based blog posts? Unfortunately, making visual content like this usually takes a lot more time, effort, and let's face it -- skill -- than the written word. Usually. But considering the popularity and effectiveness of visual content in marketing today, you can't just afford to throw in the towel. That's why we decided to take all the pain and suffering out of infographic creation. Seriously -- don't give up just yet.

Ember Charts A charting library built with the Ember.js and d3.js frameworks. It includes time series, bar, pie, and scatter charts which are easy to extend and modify. The out-of-the-box behavior these chart components represents our thoughts on best practices in chart interactivity and presentation. Features The 37 best tools for data visualization It's often said that data is the new world currency, and the web is the exchange bureau through which it's traded. As consumers, we're positively swimming in data; it's everywhere from labels on food packaging design to World Health Organisation reports. As a result, for the designer it's becoming increasingly difficult to present data in a way that stands out from the mass of competing data streams. One of the best ways to get your message across is to use a visualization to quickly draw attention to the key messages, and by presenting data visually it's also possible to uncover surprising patterns and observations that wouldn't be apparent from looking at stats alone.

Chartkick Simplify your admin dashboard - create new charts in seconds! Works with Rails, Sinatra and most browsers (including IE 6) A perfect companion to groupdate, hightop, and active_median Jump Start Jump Start continued... Did you enjoy this game? Then try Free the Genie 30 Simple Tools For Data Visualization There have never been more technologies available to collect, examine, and render data. Here are 30 different notable pieces of data visualization software good for any designer's repertoire. They're not just powerful; they're easy to use. In fact, most of these tools feature simple, point-and-click interfaces, and don’t require that you possess any particular coding knowledge or invest in any significant training. Let the software do the hard work for you.

30 Simple Tools For Data Visualization There have never been more technologies available to collect, examine, and render data. Here are 30 different notable pieces of data visualization software good for any designer's repertoire. They're not just powerful; they're easy to use. In fact, most of these tools feature simple, point-and-click interfaces, and don’t require that you possess any particular coding knowledge or invest in any significant training. Let the software do the hard work for you.

2 Related Work Next: 3 H3: 3D Hyperbolic Up: Interactive Visualization of Large Previous: 1 Motivation There are several relevant threads of related work. We have already discussed some of the core information visualization data- and task-based taxonomies in Chapter 1. We begin with the previous work in the deliberate use of distortion to show as much context as possible around a focus point. The bulk of this chapter is a discussion of the many previous systems for drawing graphs and hierarchies, both topologically and geographically.

Clarity or Aesthetics? Part 3 – Tips for Achieving Both Previous Post (Part 2 of 3): A Tale of Four Quadrants We started this series by introducing the notion of a two dimensional plane on which to assess all data graphics, and then followed it up with an example of visualizations in four different quadrants on the plane to illustrate the differences between the two axes, clarity and aesthetics, that define the plane. Now, let’s review some of the basic principles & tips that you will find in the data visualization resources out there. Productivity Archives - Teaching In Higher Ed A couple of weeks ago, I was the mini workflow guest for the Mac Power Users podcast, episode 240. Katie and David were in rare form. It was David’s birthday and perhaps nearly the last episode he recorded prior to announcing that he was going solo with his law practice… I spoke about how to use screencasting to give feedback to students in a way that students report seems more authentic, honest, and helpful. It’s the first 15 minutes of their live show, recorded live on February 7, 2015, episode 240.

Firefox Web Browser — Getting Started with Mozilla Firefox — mozilla.org Welcome to Firefox! We'll show you all the basics to get you up and running. When you're ready to go beyond the basics, check out the other links for features you can explore later. By default, Firefox gives you access to great content every time you open a new tab.