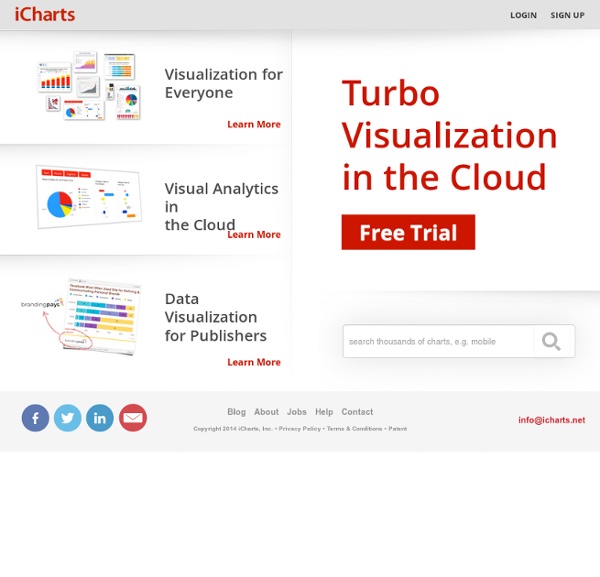 Pictogram rock posters This is my most ambitious, and maybe also the best, personal work I’ve done so far. I decided to pick a few bands and artists from the rock genre and make pictogram posters for them. Instead of just putting one single pictogram in each poster, like in my previous ‘Pictogram music posters’, I made as many as I could possibly come up with for each artist, and jammed them into one single poster. There is a total of 234 song pictograms in these posters. I started this project Jan 15th 2012, so I’ve been working on this for about five months. I am really happy and proud to be able to present them now. Vitaly Friedman's Notebook: List of nifty tools for drawing diagrams, charts and flow-charts List of nifty tools for drawing diagrams, charts and flow-charts » Aug 18, 11:53 AM Update: The site is experiencing heavy load at the moment, please be patient. Meanwhile, you can digg the article, if you think it could be useful for other users. Being a web-developer means not only being able to design web-sites or program their functionality. Sometimes it also means to be able to explain complex issues clearly and be able to present to your potential customers reasonable and convincing arguments – in order to find the best compromise between the customer’s wishes and the standards you respect.

Online Charts Builder Hohli Online Charts Builder New version: Try new version of Charts Builder, it based on new Google Charts API Load From Image URL: Chart Data can't equal to original, but very similar to it. A Collection of Printable Sketch Templates and Sketch Books for Wireframing At the beginning of a web (or application) development project I always create the sketches first. While sketching can be done on a blank paper, it’s much better to use a sketch template. For me that is the best and most productive way to work on and improve my ideas before application development begins (and things get more complicated :-)). This way I won’t pay too much attention to some details that should be taken care of later, but stay focused on general layout and functionality. Below you will find more than 20 resources that you can use in sketching phase of application development. If you have some additional resources to share, please leave a comment so I can add them to the list.

Introduction XML/SWF Charts is a simple, yet powerful tool to create attractive charts and graphs from XML data. Create an XML source to describe a chart, then pass it to this tool's flash file to generate the chart. The XML source can be prepared manually, or generated dynamically using any scripting language (PHP, ASP, CFML, Perl, etc.) XML/SWF Charts makes the best of both the XML and SWF worlds.

50 Viral Images Part Two My original 50 viral images (and how they spread) post turned out to be extremely successful and was read quite a few times to say the least. I was surprised so many people were interested as the images in there had already been passed around social media to death. With that said, I failed to consider most people don’t spend nearly as much time on the web as I do. 22 Useful Online Chart & Graph Generators Have you ever encounter situations where you need to create a simple yet good-looking chart, graphs or diagrams and all you have is your browser? Charts are good and effective way to show relationship between entities but sometimes creating one can be pretty challenging especially when your favorite word processing software is not around. In today’s post, we want to highlight some of the best web services that allow you to create various charts and graphs online on-the-fly. Most of them are easy to use and don’t you even worry about the design.