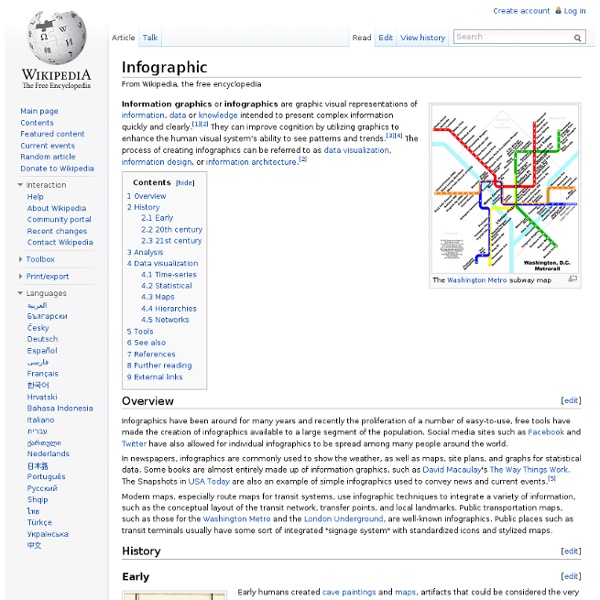 Information graphics or infographics are graphic visual representations of information, data or knowledge intended to present complex information quickly and clearly.[1][2] They can improve cognition by utilizing graphics to enhance the human visual system’s ability to see patterns and trends.[3][4] The process of creating infographics can be referred to as data visualization, information design, or information architecture.[2] Overview[edit] Infographics have been around for many years and recently the proliferation of a number of easy-to-use, free tools have made the creation of infographics available to a large segment of the population. Social media sites such as Facebook and Twitter have also allowed for individual infographics to be spread among many people around the world. In newspapers, infographics are commonly used to show the weather, as well as maps, site plans, and graphs for statistical data. "Graphical displays should: Graphics reveal data. History[edit] Early[edit]

Online Dating Statistics Infographic citysex There are 54 million singles in the United States US Population (2011) 311 Million Overall 8.8 million people have tried online dating. It’s estimated that over 20 million people visit at least one online dating service a month. Tips in Designing Effective Infographics Infographics had been famous around the web for its ability to relay information in a truly artistic manner. This makes it a universal language for it can tell a story even with one look at the visual representations. We can say that they do not have limits and boundaries for they speak through visuals. The use of graphics gives an added beauty to the entire material. It is even made more significant with the use of valuable data that will be delivered to the public.

The Infographic Revolution: Where Do We Go From Here? The infographic may seem to some to be a modern phenomenon; but not many know of the true origins and purpose of an infographic. For one thing, it isn’t an invention of the digital medium, it is merely popularized by it. In this article I will be examining the origins of an infographic and how it is more popularly used today. German student creates electromagnetic harvester that gathers free electricity from thin air A German student has built an electromagnetic harvester that recharges an AA battery by soaking up ambient, environmental radiation. These harvesters can gather free electricity from just about anything, including overhead power lines, coffee machines, refrigerators, or even the emissions from your WiFi router or smartphone. This might sound a bit like hocus-pocus pseudoscience, but the underlying science is actually surprisingly sound. We are, after all, just talking about wireless power transfer — just like the smartphones that are starting to ship with wireless charging tech, and the accompanying charging pads. Dennis Siegel, of the University of Arts Bremen, does away with the charging pad, but the underlying tech is fundamentally the same. The efficiency of wireless charging, however, strongly depends on the range and orientation of the transmitter, and how well the coil is tuned to the transmitter’s frequency.

‘Duck Dynasty’ star fantasizes about atheist family’s brutal rape and murder to make point about God’s law “Duck Dynasty” patriarch Phil Robertson conjured up a lurid fantasy about the rape and murder of an atheist family to illustrate a point about following God’s law. The reality TV star made the comments Friday at the Vero Beach Prayer Breakfast, and Christian conservative radio host Rick Wiles aired them later that day on his “Trunews” program, reported Right Wing Watch. “I’ll make a bet with you,” Robertson told the religious gathering. “Two guys break into an atheist’s home. He has a little atheist wife and two little atheist daughters. Two guys break into his home and tie him up in a chair and gag him.”

12 Eye-Catching Infographic Design Tips Infographics of all topics have emerged as one of the best ways to communicate data and knowledge. We're asked for infographic design tips constantly. It's just something about combining fascinating stats and information alongside beautiful graphics that makes us stop and actually need to take a look. But what if you're at the other end of the display actually creating these jaw-droppers? Infographics on Education November 5, 2013 The Bill & Melinda Gates Foundation, whose priorities include global health and U.S. education, has made initiatives focused on teacher quality a key dimension of its recent grantmaking strategy. October 9, 2013 U.S. Secretary of Education Arne Duncan racked up a significant number of bargaining chips in his first years in office, which he used to create incentives for states to adopt his education improvement ideas. With fewer sweeteners left to use as leverage, he will likely grow even more dependent on sanctions and persuasion in the administration’s final three years. October 2, 2013 Superintendents voice both skepticism and optimism on the governing abilities of school boards in the second of a series of Gallup-Education Week polls. September 24, 2013 In Philadelphia, key players are shaping the fate of a high-stakes effort to replicate the acclaimed Science Leadership Academy.

Google unveils “Project Glass,” augmented reality glasses Rumors have been floating around that Google is developing a pair of glasses with a built-in heads-up display, and Google confirmed the project's existence today. "Project Glass," as shown in a Google+ page, outfits the wearer with a sleek pair of glasses with just one small lens worn over the right eye, and a camera. That doesn't mean a working pair actually exists yet—Google said photos of the glasses were posted to "show what this technology could look like" and a video was created "to demonstrate what it might enable you to do."

Is Data Visualization Useful? You’ll Have to Prove It. Great data visualization is hard to measure: you can’t prove you have a good chart. Unless you can convince your employer to deploy at least two different formats/layouts and are able to compare results, you can say “this is a good chart” but that’s an act of faith, not an act of science. It’s True Because It Rhymes

Ninja Crunch - Part 2 15 Impressive Steampunk Digital Artworks We revisit Steampunk-inpired artworks and listed some of the most impressive digital artworks today. Impressive Vexel Artworks Check out these vexel illustrations using a unique technique to immitate vector artworks. 30 Must-See Diablo 3 Fan Art And Wallpapers The Do’s and Don’ts of Marketing Infographics: Outbound Email We follow up our three-part series on creating viral infographics with tips on how to market them successfully. Come back next week for the second installment in this series. The thing with viral infographics is, great content won’t always float to the top. Our social world moves at a thousand links a second and thinking that if you build it, they will come is… well, naive. The first step, and perhaps most obvious, is to create something awesome.

Over 100 Incredible Infographic Tools and Resources (Categorized) This post is #6 in DailyTekk’s famous Top 100 series which explores the best startups, gadgets, apps, websites and services in a given category. Total items listed: 112. Time to compile: 8+ hours.