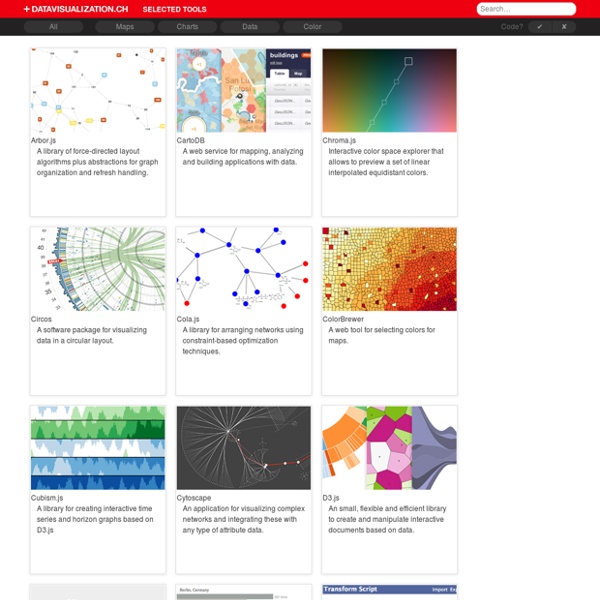 Looking 4 data visualization: analytics Chart selection 1. ChartChooser from Juice Analytics2. Charts suggestions from Andrew Abela3. Graph Selection Matrix from Perceptual Edge4. What is Visualization? A Definition What is a visualization? The word is problematic, and there have been very few definitions that try to define this field we are working in. More importantly: what is not a visualization? It is easy to argue that anything visual is a visualization in some way – but does that mean anything? Here is a definition of visualization and a few examples to illustrate the different criteria. Definition Six essential steps to present data persuasively “The graphic method has considerable superiority for the exposition of statistical facts over the tabular. A heavy bank of figures is grievously wearisome to the eye, and the popular mind is as incapable of drawing any useful lessons from it as of extracting sunbeams from cucumbers.” -Arthur Briggs Farquhar and Henry Farquhar from Economic and Industrial Delusions In a previous column, I shared that data visualization is your secret weapon for storytelling and persuasion. I wanted to follow that up with actionable tips for how you can be more successful with your own efforts sharing data with your team. I’ve been in countless meetings over my career where clients or colleagues presented data to me …painfully.

Learn more — Data Visualisations for the Environment Daviz is a web tool developed by the European Environment Agency which helps creating interactive data visualizations easily through the web browser, no extra tools are necessary. It is free and open source. You can generate attractive and interactive charts and combine them in a dashboard with facets/filters which updates the charts simultaneously. Data can be uploaded as CSV/TSV, via URL or using SPARQL to query online Linked Open Data servers (a.k.a. sparql endpoints). DaViz is the first Semantic web data visualisation tool for Plone CMS, entirely web-based!

L'avenir est des données Fragment of a figurative map of Charles Joseph Minard, a precursor of statistical graphics and data visualization. At a time when journalism is undergoing a profound crisis as a result of the rise of social networks, financing difficulties, and increasing layoffs in the media industry, the 1st Data Journalism Conference organised by the Spanish chapter of the Open Knowledge Foundation opened up a new direction for the profession; a future that paradoxically goes back to its origins: to the search for new sources, to objective accounts of events and to data analysis. The conference took place on 24, 25 and 26 May in Barcelona, Madrid, Seville and San Sebastián. In Barcelona, the CCCB was the venue for the first day of the conference, which lasted twelve hours and featured the participation leading experts in field of data journalism, including Mar Cabra, one of the coordinators of the event along with the journalist Karma Peiró.

Advanced visualization Democratizing visualization Advanced visualization from IBM can help you gain insight from the myriad of data that your company generates. You can understand much more about the underlying numbers in your data when you can see them. For your visualization to be effective, you need technology that simplifies the visualization creation process and guidance from visualization specialists who can show you the best format for presenting your data. Data visualization books: How to start your personal library The Excel Charts Blog There are many approaches to data visualization. Take well-know authors like Tufte, Cleveland, Ware, Few, Bertin or McCandless. There is some overlap, but they all approach data visualization from a different angle. That’s great news for you: this means that you can come up with a unique point of view that reflects your interests and needs. I suppose the books you buy are consistent with that view. Let me give you my own example.

16 idées originales pour vos infographies - 99designs Blog Infographics: everyone loves ’em. They take boring numbers and data and make it beautiful and digestible. They account for hundreds of thousands of keyword searches on Google every month. PostGIS on Amazon RDS: A Spatial Database in the Cloud An announcement at the AWS:Invent 2013 conference that got me excited was the new support for PostgreSQL on Amazon Web Service’s (AWS) Relational Database Service (RDS). I crossed my fingers as I read the announcement, hoping that PostGIS was part of this. “No Way!” I thought after reading that PostGIS was indeed! I knew I had to try it out. Image via Techcrunch article: Civic Infographics — English By Giulio Frigieri The importance of perception for analysis and communication through infographics In his book “Graph design for the eye and mind”, Stephen Kosslyn asserts that “a good graph forces the reader to see the information the designer wanted to convey” and this would be the very “difference between graphics for data analysis and graphics for communication”[Kosslyn, 2006]. But are there any specific instances in which we can say that a data-based graphic is designed to describe, not to analyze? If so, what would make it more of an instrument for communication than for analysis? The fact that an explanatory text can be added – regardless of how concise or verbose it is – is not enough to imply that a chart’s nature is prevalently descriptive.

Understanding what makes a visualization memorable John Wihbey teaches data journalism in the Media Innovation program at Northeastern University’s School of Journalism. The world of data visualization has long been shaped by canonical ideas from theorists like Edward Tufte. His book The Visual Display of Quantitative Information is a must-read for information designers, which include newsroom graphics editors. Tufte’s organizing principles–the eloquent and ethical display of substance, statistics, and design–are now being refined and adapted for media production by contemporary dataviz gurus like Alberto Cairo.

"Generative Design" – A Computational Design Guidebook - Review “The main change in the design process achieved by using generative design is that traditional craftsmanship recedes into the background, and abstraction and information become the new principal elements.” Thus reads a rather pertinent nugget of wisdom tucked into the concluding notes of Generative Design: Visualize, Program and Create with Processing, an epic computational design text by Hartmut Bohnacker, Benedikt Groß, Julia Laub and editor Claudius Lazzeroni. With that point, the authors are describing how the syntax of code and data are intrinsically tied to new modes of composition and production. This statement also speaks to the organizational logic of the book, which weighs-in at a whopping 470 pages of thoughtfully categorized generative strategies that have been broken down into bite-sized thematic walkthroughs. Purchase on Amazon.

How to Make an Infographic: Free Visual E-Book for Beginners On average, Americans consume 63 gigabytes of information per person per day. That’s roughly half of all the storage space in a new MacBook Air laptop. With so much information bombarding us on a daily basis, it’s no wonder we’ve become desensitized to even the most shocking statistics. For example, what if I told you that the 74 million richest people in the world possess 50% of its wealth? The real meaning of this statement would probably be lost on most of us.