20 WebGL sites that will blow your mind. Almost all modern computers and most smartphones have powerful GPUs, graphics processors that often have more number-crunching power than the CPU. 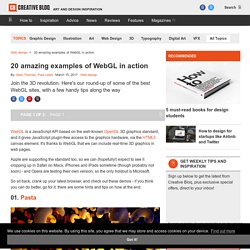 But until recently web pages and mobile websites couldn't use them - meaning slow, low-quality graphics, almost always in 2D. That all changed when WebGL was released in the latest versions of Firefox and Chrome. WebGL, based on the well-known OpenGL 3D graphics standard, gives JavaScript plugin-free access to the graphics hardware, via the HTML5 canvas element - making realtime 3D graphics in web pages possible. Tech support Apple are supporting the standard too, so we can (hopefully!)

So sit back, crank up your latest browser, and check out these demos - if you think you can do better, go for it: there are some hints and tips on how at the end. Apache Ant - Binary Distributions. Apache Ant™ Apache Ant is a Java library and command-line tool that help building software. Downloading Apache Ant Use the links below to download a binary distribution of Ant from one of our mirrors. It is good practice to verify the integrity of the distribution files, especially if you are using one of our mirror sites.

In order to do this you must use the signatures from our main distribution directory. Ant is distributed as zip, tar.gz and tar.bz2 archives - the contents are the same. In addition the JPackage project provides RPMs at their own distribution site. If you do not see the file you need in the links below, please see the master distribution directory or, preferably, its mirror. Mirror You are currently using If you encounter a problem with this mirror, please select another mirror. Current Release of Ant. Augmented Reality and WebGL. AR, and especially vision based one, has just some small but hard constraints on an accompanying 3D engine. 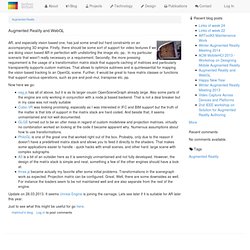 Firstly, there should be some sort of support for video textures if we are doing vision based AR in perfection with undistorting the image etc. pp.. In my particular scenario that wasn't really necessary or a requirement. Secondly, the more pressing requirement is the usage of a transformation matrix stack that supports caching of matrices and particularly transparently supports custom matrices. That allows to optimize subtrees and is quintessential for mapping the vision based tracking to an OpenGL scene.

Further, it would be great to have matrix classes or functions that support various operations, such as pre and post-mul, transpose etc. pp. Now here we go: osg.js has all of above, but it is as its larger cousin OpenSceneGraph already large. Beginner’s Guide to Augmented Reality - Tuts+ Augmented Reality has been cropping up a lot lately, especially Flash-based AR. 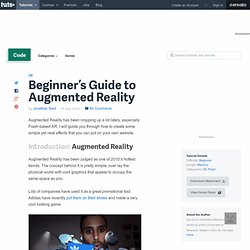 I will guide you through how to create some simple yet neat effects that you can put on your own website. Introduction: Augmented Reality Augmented Reality has been judged as one of 2010’s hottest trends. The concept behind it is pretty simple, over lay the physical world with cool graphics that appear to occupy the same space as you. Lots of companies have used it as a great promotional tool. Lego use it as a way to visualize what their products will look like when you’ve finished building them.

Some freelancers use it as a very cool business card and promotional tool. In January of this year, I completed a project for university where I created a wearable augmented reality system. Getting started with Augmented Reality and the FlarToolKit. Author: Imagine Admin 24th November 2009 Learn the basics of Augmented Reality using ActionScript 3.0, Papervision and Flex Builder One of the biggest buzzes at the moment is Augmented Reality, and the reason for that is because unlike two years ago when you could only make 3D objects attach themselves to physical objects using C# and a desktop application, we can now do the same using ActionScript 3.0. 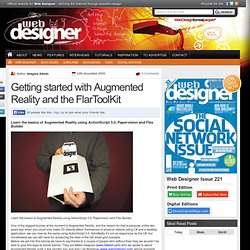 Admittedly it’s not as responsive as the C#, but nonetheless we can still have fun producing the likes of the GE smart grid example. Before we get into this tutorial we have to say thanks to a couple of people who without their help we wouldn’t be able to give this easy-to-follow tutorial. Tutorial files for this tutorial are available here 01 Get the pattern 02 Pattern maker Next you need to create a .pat file so the code can map to the piece of paper, so download the pattern maker from Mikko’s website at www.mikkoh.com/blog/? 03 Create the pattern Pages: 1 2 3 4 5. GWT Augmented Reality - HOWTO - step 0. GWT Project.

Prerequisites You will need the Java SDK version 1.6 or later. 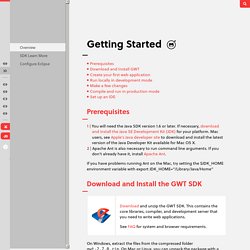 If necessary, download and install the Java SE Development Kit (JDK) for your platform. Mac users, see Apple’s Java developer site to download and install the latest version of the Java Developer Kit available for Mac OS X. Apache Ant is also necessary to run command line arguments. If you don’t already have it, install Apache Ant. If you have problems running Ant on the Mac, try setting the $JDK_HOME environment variable with export JDK_HOME=“/Library/Java/Home” Download and Install the GWT SDK. Obsidian. Three.js - 3D JavaScript Engine. Writing Augmented Reality Applications using JSARToolKit - HTML5 Rocks. This article discusses APIs that are not yet fully standardized and still in flux. 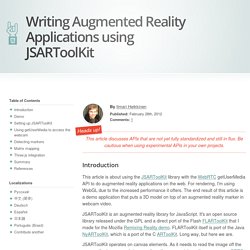 Be cautious when using experimental APIs in your own projects. Introduction This article is about using the JSARToolKit library with the WebRTC getUserMedia API to do augmented reality applications on the web. For rendering, I'm using WebGL due to the increased performance it offers. The end result of this article is a demo application that puts a 3D model on top of an augmented reality marker in webcam video. Www.oracle.com/technetwork/java/javase/downloads/jdk7-downloads-1880260.html.