How to Plan Instruction Using the Video Game Model 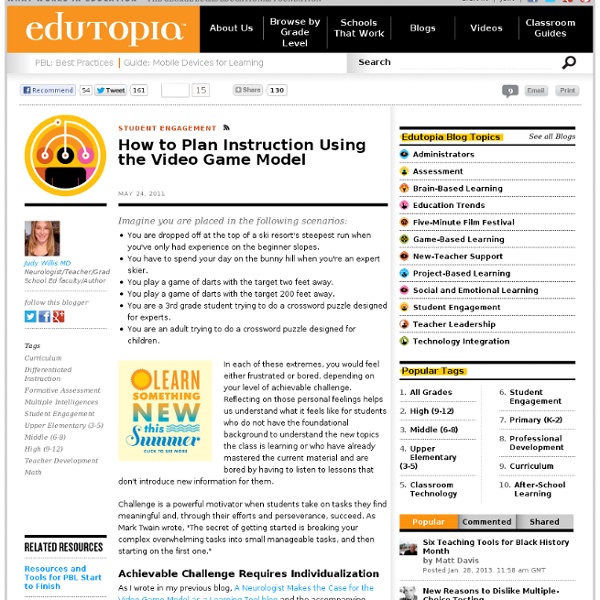 Imagine you are placed in the following scenarios: You are dropped off at the top of a ski resort's steepest run when you've only had experience on the beginner slopes. You have to spend your day on the bunny hill when you're an expert skier. You play a game of darts with the target two feet away. You play a game of darts with the target 200 feet away. You are a 3rd grade student trying to do a crossword puzzle designed for experts. In each of these extremes, you would feel either frustrated or bored, depending on your level of achievable challenge. Challenge is a powerful motivator when students take on tasks they find meaningful and, through their efforts and perseverance, succeed. Achievable Challenge Requires Individualization The video game model is ideal for kids lacking in foundational knowledge, but it is not necessary for all kids at all times. The Role of Scaffolding Demonstrating Incremental Progress Strategy 1: Use Rubrics Strategy 2: Flexible Grouping

The Top 25 Facebook games of May 2013 It’s time to look at the Top 25 Facebook games for May 2013. Since Facebook started reporting its app metrics using ranks in January 2013, Inside Social Games reported on the top 25 Facebook games using AppData’s estimated monthly active users (MAU_E) and estimated daily active users (DAU_E). MAU_E and DAU_E are estimated MAU and DAU values based on current performance data from Facebook and our six-year-old database of historical Facebook application metrics. By analyzing trends in our database of almost 400 million measurements of how MAU and DAU function and move over time, our data scientists have been able to develop algorithms for estimating MAU and DAU values for Facebook applications. Both of May’s lists saw King, which has more than 63 million DAU across its social and mobile games, continue to hold the top spots, though Zynga is still close behind and with more titles in the top 25 lists overall.

A Neurologist Makes the Case for the Video Game Model as a Learning Tool The popularity of video games is not the enemy of education, but rather a model for best teaching strategies. Games insert players at their achievable challenge level and reward player effort and practice with acknowledgement of incremental goal progress, not just final product. The fuel for this process is the pleasure experience related to the release of dopamine. Dopamine Motivation

Autism Autism is a disorder of neural development characterized by impaired social interaction and verbal and non-verbal communication, and by restricted, repetitive or stereotyped behavior. The diagnostic criteria require that symptoms become apparent before a child is three years old.[2] Autism affects information processing in the brain by altering how nerve cells and their synapses connect and organize; how this occurs is not well understood.[3] It is one of three recognized disorders in the autism spectrum (ASDs), the other two being Asperger syndrome, which lacks delays in cognitive development and language, and pervasive developmental disorder, not otherwise specified (commonly abbreviated as PDD-NOS), which is diagnosed when the full set of criteria for autism or Asperger syndrome are not met.[4] Characteristics

GameSites NOTE: Click on any of the anchor links you find interesting, read more about them, then click the headings to visit the website! Kindersite- List of 100s of Games The Kindersite spearheaded by Joel Josephson (@acerview54) has 1000s of educational and fun content specifically designed for preschool, kindergartens, elementary, primary schools and special needs students. Register for free for full featured access, but it’s not required. All Fun & Games? Understanding Learner Outcomes Through Educational Games Over the past several years, there has been tremendous interest among educators in the use of digital games as serious learning. Advocates of game-based learning for K-12 students cite the value of digital games to teach and reinforce skills that prepare students for college and career, such as collaboration, problem solving, creativity, and communication. Not as often discussed is our ability to use students' in-game actions as evidence for the assessment of skills and knowledge, including those not easily measured by traditional multiple-choice tests.

Learning Beyond Walls- Games and Wikis! Posted by Shelly Terrell on Tuesday, August 17th 2010 Part of the Cool Sites series Many of you have started school already and are integrating new technology in your curriculum. Wikis are one of my favorite tools for encouraging learning beyond the classroom walls. I’m sharing with you this post I originally wrote for one of my favorite blogs, ELT Digital Play, back in May. Ian Livingstone applies to create 'gaming' school 9 October 2014Last updated at 10:20 ET By Dave Lee Technology reporter, BBC News Ian Livingstone is known to some as "father" of Tomb Raider Lara Croft British games industry veteran Ian Livingstone has formally applied to launch a free school with lessons built using video gaming. Mr Livingstone told the BBC he wanted to use games-based learning rather than relying on "relentless testing".

Let’s Play! 20+ Sites for Young Learners Part of the Cool Sites series Sometimes, the teachers of young learners get a bad reputation for playing all day in their classes. Let me tell you a secret. Any great teacher of young learners is definitely playing a lot in and out of the classroom! Radical new economic system will emerge from collapse of capitalism At the very moment of its ultimate triumph, capitalism will experience the most exquisite of deaths. This is the belief of political adviser and author Jeremy Rifkin, who argues the current economic system has become so successful at lowering the costs of production that it has created the very conditions for the destruction of the traditional vertically integrated corporation. Rifkin, who has advised the European Commission, the European Parliament and heads of state, including German chancellor Angela Merkel, says: No one in their wildest imagination, including economists and business people, ever imagined the possibility of a technology revolution so extreme in its productivity that it could actually reduce marginal costs to near zero, making products nearly free, abundant and absolutely no longer subject to market forces. With many manufacturing companies surviving only on razor thin margins, they will buckle under competition from small operators with virtually no fixed costs.

Digital Play In the University of Bristol’s Education Endowment Foundation‘s recent study on Neuroscience and Education, (Howard-Jones, 2014), there is an interesting section on Learning Games. Classroom practice and neuroscientific research The review ”considers the extent to which insights from the sciences of mind and brain influence, or are close to influencing classroom practice”, summarising “existing evidence about approaches and interventions that are based, or claim to be based, on neuroscience evidence.” The report categorises the approaches into 1) those which are likely to have a positive impact on attainment, 2) those which need further testing to determine the likely impact on attainment, and 3) those which do not seem to have a promising impact on attainment.

Prizewinning Educational Games from the Nobel Foundation Marie Curie, Martin Luther King Jr, Albert Einstein, Sir Alexander Fleming, Mother Teresa; all of these amazing individuals have one thing in common – winning the Nobel Prize. The Nobel Prize is one of the most highly regarded awards given to people working in the fields of literature, medicine, physics, chemistry, peace, and economics. But the Nobel Foundation is more than just an award giving Foundation, and has branched out into creating educational content related to the hard work done by Nobel Prize winners.