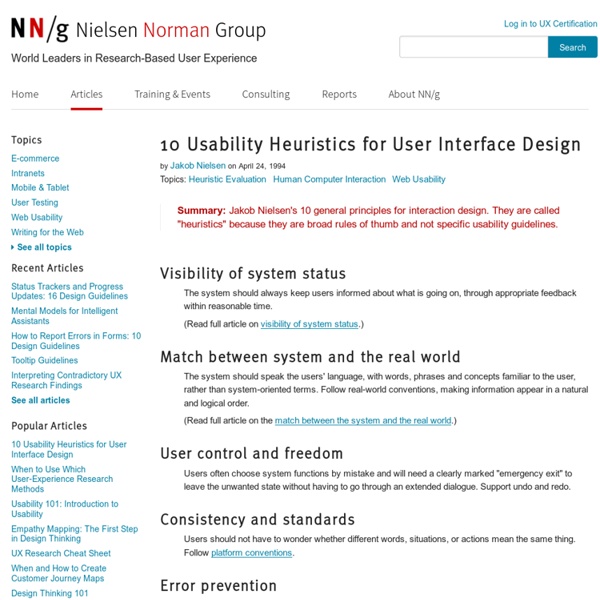 Visibility of system status The system should always keep users informed about what is going on, through appropriate feedback within reasonable time. (Read full article on visibility of system status.) Match between system and the real world The system should speak the users' language, with words, phrases and concepts familiar to the user, rather than system-oriented terms. Follow real-world conventions, making information appear in a natural and logical order. (Read full article on the match between the system and the real world.) User control and freedom Users often choose system functions by mistake and will need a clearly marked "emergency exit" to leave the unwanted state without having to go through an extended dialogue. Consistency and standards Users should not have to wonder whether different words, situations, or actions mean the same thing. Error prevention Even better than good error messages is a careful design which prevents a problem from occurring in the first place. See Also

Recognition Over Recall at | SoulSoup | E-Learning, Usability, Knowledge Management etc. Just finished reading Universal Principles of Design by William Lidwell, Kritina Holden, Jill Butler. The greatness of the book is its simplicity. Most of the principles are so obvious that we tend to forget during learning design. I’ll blog some gems collected from the book in non-sequential format. Here goes the first part: Recognition Over Recall People are better at recognizing things they have previously experienced than recalling those things from memory. Recognition memory is much easier to develop than recall memory. Early computers used command-line interface, which used recall memory for hundreds of commands. 5 Responses to 'Recognition Over Recall' Leave a Reply