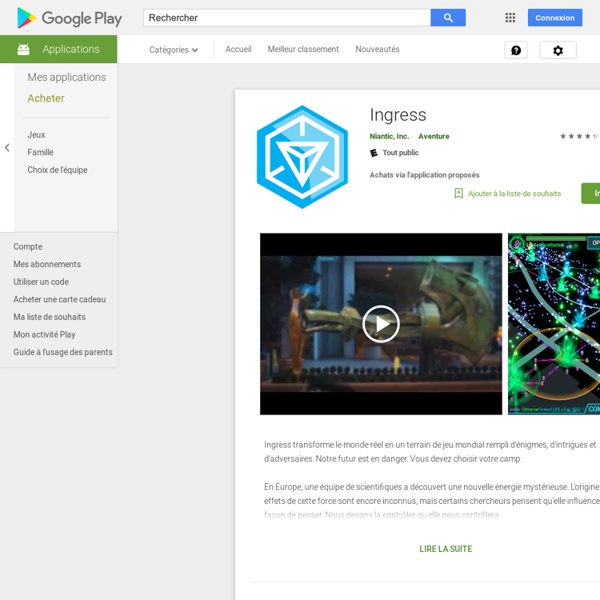 Fringe (TV series) Early critical reception of the first season was lukewarm but became more favorable in subsequent seasons, when the series began to explore its mythology, including parallel universes and alternate timelines. The show, as well as the cast and crew, has been nominated for many major awards. Despite its move to the "Friday night death slot" and low ratings, the series has received a cult following. It has also spawned two six-part comic book series, an alternate reality game, and three novels.

Life on MARS: Location-Independent Augmented Reality GPS-based Augmented Reality is great for a mobile game like Ingress, but it won't help you fix your car. New software from PAR Works has a visual take on Augmented Reality, bringing the benefits of the concept to an entirely new class of applications. It might even work its way into gaming, too.

Élite d’echapper - Escape Arriba, muchacho! Join Gonzaléz as he takes Maria -- his beloved six-barrel revolver -- for a ride through the haunted deserts of Mexico. Stock up on some ammo and guide this macho hero in a quest to give monsters some of that not-so-sweet taste of gunpowder. Be aware! This game is so manly it grows beards on babies! WHAT MACHO PEOPLE ARE SAYING"Gonzaléz is the hero we’ve been longing for!" investigation:characters [Niantic Project Wiki] To prevent vandalism, unregistered users cannot edit this wiki. If you would like to contribute, please create an account. The investigation has uncovered a number of individuals involved in the Niantic Project, some by choice, and others by circumstance. These are the ones that have been found so far

Wikitude See more with Wikitude!Wikitude allows you to see more than your eyes can capture. Our "computer vision" technology is a bit like magic and connects you with the world in a completely new way. Use the app as a tool to experience augmented reality content, campaigns, projects, promotions, games and so much more by simply scanning the things you see!At the core of the Wikitude App is the Power Search, your gateway to unlocking the world of digitally augmented content around you. For example, businesses can provide you with a Search Code that will directly lead to a specific AR experience. Let's Escape Escape Games Dark Cave EscapeYou are on an adventure trip to a cave which is an old gold mine but due to sudden earthquake there has been landslide in parts of the cave and you are trapped. There is only one way to get in and out of the cave. Use the elements around to cave, that will help you solve the puzzles. Find all the objects; use your skills and ability in combining them to break out of the cave in order to escape. Pick up items and use them from your inventory to help you find your way out.

How To Use Augmented Reality In Education When you were a kid, did you watch RoboCop and totally love the heads-up display? What about the fascinating visuals in Minority Report or Iron Man? They’re basically a form of augmented reality (AR for short). Augmented reality is not something limited to just Hollywood blockbusters though. Tycho Sees Coming soon While i was working on my new Ingress comic, I decided to go back and explore previous visions. It led me to revise my last two comics, discovering details that previously I had not sensed….

WallaMe - Augmented Reality – Applications sur Google Play Hide messages in the real world using augmented reality. Leave a message on the wall, or somewhere in a real place, that can be seen only by those you want. It's a funny way to hide private messages in public places. Take a picture of a wall near you, add pictures or freehand sketches and share your creation with your friends. Net-A-Porter: Augmented Reality Shop Windows  NET-A-PORTER are rolling out Augmented Reality Shopping Windows, around the world including Paris, New York, London, Munich and Sydney. The video demo above is from late last year for Fashion’s Night Out celebrations in London and New York, but as of today, it’s been rolled out globally for the new Karl by Karl Lagerfeld collection, with the same sort of features. After downloading the NET-A-PORTER iPhone/iPad app, customers who turn up at stores can activate an Augmented Reality shopping experience by pointing the camera at the various pieces in the window, revealing 360 degree product models, video catwalk showcases, product information, pricing and the ability to buy instantly… It’s also a great way to generate after hours sales. Via. Be Sociable, Share!

Augmented Reality with #Processing - Tutorial by Amnon Owed All of the visuals in the above video were created using NyArtoolkit for Processing. NyARToolkit is an augmented reality toolkit built with 100% pure Java. It is derived from ARToolkit-2.72.1. Like Processing itself it’s open source and free! In this tutorial you will learn how to use it to place computer generated imagery correctly onto real world footage. GoldRun's App Features Smurfs In Augmented Reality 5 December '11, 10:41pm Follow GoldRun just launched an augmented reality app that places a virtual Smurf inside your iPhone photos. The app extends the recent movie experience into reality, affording kids and parents the ability to see themselves standing right next to their favorite Smurf characters.