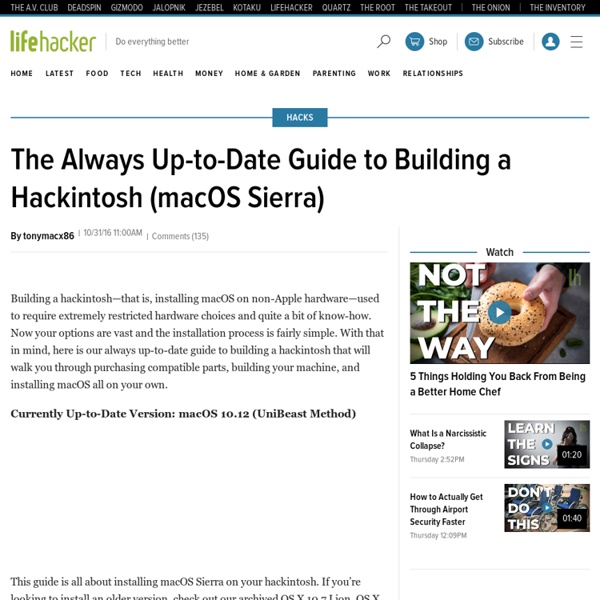 I know this is an older post, but I wanted to add something. This is great for people that already have a capable PC, but are interested in also using OSX. I built a new i7 based PC about a year ago and just recently got interested in playing around with OSX after my wife bought a new MacBook Air for work. Outside of trying to find a good deal on a used Mac, the minimum buy in to get a new Mac would be about $600 for a base model Mac Mini. Instead, I followed this guide and now have a fully functional Hackintosh for the $20 it cost for a new copy of OSX. At worst I would have also had to buy a new hard drive, but I already had a couple of spares laying around so I used one of those.

All We Know About Maximizing CPU Related Performance For those individuals who have successfully built or currently successfully build their own system(s) and/or have successfully modified or do successfully modify their prebuilt system(s) for maximum CPU performance, and for those individuals who are earnestly interested in successfully building or modifying their own personal prebuilt system(s) for maximum CPU performance, this thread is dedicated to being a one-stop-shop for locating information helpful for successfully maximizing CPU performance. There are other threads (and forums) for the expression of views by those who advocate (or believe) that doing neither is best and there are other threads (and forums) for software, including OS, installation [such as ] and tweaking [such as or ], but this isn't one of those threads. Please revisit this first post regularly as I will be continually compiling here a resource summary for building and modifying different systems.

Updating the Hackintosh to Mavericks - leolabs.org This tuesday, Apple released its new version of Mac OS X called Mavericks. Just a few hours later, a new version of UniBeast and MultiBeast were released on tonymacx86′s website that allowed the installation of Mavericks on any hackintosh. The cool thing with Mavericks is that it can be downloaded for free, so you don’t have to pay for the operating system if you’re building a hackintosh. [Success] MSI PC MATE Z97, GTX560Ti, i7 4790k, The Big Screen FCP Build (Dual Boot Win 8.1) with CLOVER OS X 10.10.3 First whole story in short.. It wasn't EASY! But all thanx to this wonderful Forum for the inspiration.I wanted a Video Editing Workstation with Big 52" LED Screen and A secondary monitor for close look ups.I may not be able to help you guys in full details with each and everything but let me know if you need particular help and i will try my best.Step 1 Clover installation USB.

Lowpoly Bot To have your own image polygonized follow this link and use the "Tweet to" button to conveniently upload an image. Or use your favorite twitter client and mention @Lowpolybot in the tweet that contains your image. Only images that are embedded in the tweet will work, links to external images will fail. You can add some hashtags to control the outcome:Style: #triangle, #voronoi, #subdivision, #iso, #rect, #square,#kite, #angles, #broken or #minimal Fill: #flat, #gradient, #soft, #strong, #burst, #dial, #flow, #uni or #perp Texture: #grain, #nograin or #raster Strokes: #fat or #thin and #black or #white Color: #colorize, #randomcolor, #spectra, #gram and #overdrive Surprise: #flip, #shuffle and #eleven If you do not pick a tag in a category a random one will be chosen for you.

The Best Hackintosh Laptops of 2012 SEE ALSO: The Best Hackintosh Laptops of 2012 - For Mountain Lion It's very difficult to find a laptop that can easily be turned into Hackintosh. As mentioned in our Hackintosh compatibility guide, most laptops aren't good Hackintoshes, because the compact design of laptops makes it very difficult to replace non-compatible parts. With this in mind, I've compiled a list of Hackintosh-compatible laptops, all of which can run Mac OS X Lion without the need to replace any hardware. Hackintosh Via Hyper-V on a Windows 8+client hyper-v system: possible? - Ars Technica OpenForum apod wrote: Ok, I'll bite seeing as I brought up the EULA. Since it's in the EULA it's very unlikely that any company producing virtualisation software will produce drivers that will make it easy to run OS X on non-Apple hardware. Apple tends to be quite ready to sue and they probably don't want that hassle. On a commercial level you're absolutely right and it's obvious. I'm personally curious why we haven't really moved on in terms of hackintoshing at the hacker level in terms of technique since the early 2007's, when it feels like I was doing almost the same thing to try and get it to work (and scratching our heads at writing selected drivers).

Why you should consider Beanstalkd Processing in background IO bound or cpu bound tasks is now a common practice in most web applications. There's plenty of software to help build background jobs, some based on Redis, some based on a specific language implementation with threads, some based on a messaging system, and there's Beanstalkd. Background Flubit’s Chrome Extension Makes It Easy to Find a Better a Price for Online Shopping Flubit is an offers platform that lets you request better prices for specific products by allowing it to manually create better offers for you. For example, perhaps you need those special bin bags from Amazon, or that headphone splitter cable you keep forgetting to buy. While you could just log on and grab those in one click, going via Flubit’s platform gives you the potential opportunity to get them at a lower price. Despite having been up and running since 2012, it was only this month that the company decided to streamline the process with the release of its Chrome extension.