About the EVOKE game 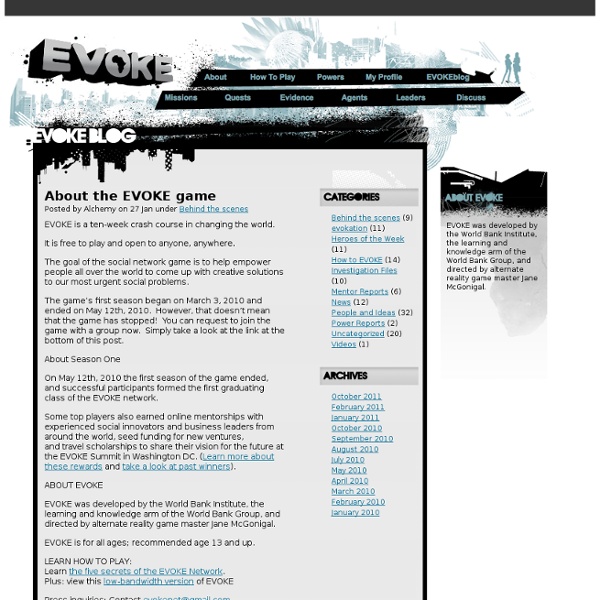 Posted by Alchemy on 27 Jan under Behind the scenes EVOKE is a ten-week crash course in changing the world. It is free to play and open to anyone, anywhere. The goal of the social network game is to help empower people all over the world to come up with creative solutions to our most urgent social problems. The game’s first season began on March 3, 2010 and ended on May 12th, 2010. About Season One On May 12th, 2010 the first season of the game ended, and successful participants formed the first graduating class of the EVOKE network. Some top players also earned online mentorships with experienced social innovators and business leaders from around the world, seed funding for new ventures, and travel scholarships to share their vision for the future at the EVOKE Summit in Washington DC. EVOKE was developed by the World Bank Institute, the learning and knowledge arm of the World Bank Group, and directed by alternate reality game master Jane McGonigal. Press inquiries: Contact evokenet@gmail.com

The Frugality Game - Home Track your spending and saving habits, find bargains, coupons, & treasure of your very own.ss Learn how to keep track of your finances, set up for retirement, plan for a vacation, a family, and lots of other cool stuff! Discover great deals on merchandise, utilities, travel, retail, and more. You are using an older version of Internet Explorer. For best results, upgrade to a newer version here. close The Financial Strength Builder™ program helps you build a solid financial foundation, while leading you down your path to financial success. The greatest athletes of all time all have one thing in common: amazing coaches. The Kidz Zone will help teach kids about saving, investing, banking, setting goals and other import things that will affect their financial future. The Savings and Discount Center is a place where TFG members can go to get special offers, discounts and coupons on all sorts of items. The only smart credit report! Twitter Facebook Blog Share Copyright© 2014 TFG, Inc.

Zooming In On 2011 Serious Games Showcase & Challenge Improving human performance through Serious Games This year’s Serious Games Showcase & Challenge (SGS&C) winners were announced at an award ceremony the final day of the Interservice/Industry Training, Simulation and Education Conference (I/ITSEC), early December. The Serious Games industry has really raised the bar for the art of the possible demonstrating it is getting to grips with the aspired degree of fun and engagement in game-based learning applications. Many companies that have traditionally been considered entertainment games companies had a large presence at the conference, and many booths had one games-related project for people to experience. It is clear that gaming technologies are gaining substantial ground in the Modeling and Simulation Community. The Serious Games Showcase & Challenge has also experienced substantial growth during I/ITSEC over the last six years. Six teams emerged as winners from I/ITSEC 2011 SGS&C, representing the best entries in these six categories:

Ric Young - &quot;Innovators in Action&quot; Speaker Series | Social Innovation Generation The SiG@Waterloo "Innovators in Action" Speaker Series, applied the ideas of social innovation to a number of specific sectors and issues - education, youth mentorship, inclusion, collaboration and cultural change. Each of the keynote speakers shared their experiences of operating at the national level to identify and address the root causes of intractable social challenges. Each keynote lecture was followed by a local panel discussion who shared their reflections on the presentation and offered insight into their own experiences. We apologize for the low sound quality. Jump to: Frances Westley introduces Ric YoungRic Young's Main PresentationThe PanelBiographies On May 5th, 2010 SiG@Waterloo invited Ric Young to speak to an audience at the Waterloo Regional Children's Museum in downtown Kitchener. "We are living at a point in history when the need and desire for change is profound...It is a pivotal time. - Eric Young, From the forward of Getting to Maybe: How the World is Changed Dr.

Trading Around the World International trade touches us all. We drink soda from cans made of aluminum mined in Australia, wear shoes made in Europe, eat fruit from South America, build machinery from steel milled in Asia, wear clothes made from African cotton, and live in homes built from North American wood. We take it for granted, yet before we can enjoy these products and materials, traders must negotiate prices and deliver the goods through a network of relationships that literally spans the globe. Play this game to experience the challenges and excitement of international trade. Before you start, think about what you want to accomplish as a trader: Do you want to build up as much wealth as you can by selling as much of your commodities as you can? The only limit is your imagination, your negotiating skills, and your bank account!

Mon APB An Imaginary Platform: 2010 Municipal Elections in Windsor Posted by Justin on Monday, August 2, 2010 · 3 Comments We’ve updated our imaginary campaign post to reflect some recent (positive) changes: Our projects try to work around the realities that we encounter in Windsor on a daily basis. We address these realities creatively, and so the ways in which we address them don’t always translate to solutions. We’re little less than 3 months away from the 2010 municipal elections here in Windsor. It’s essentially a given that we’ll have the same mayor for a third term (or maybe not?) In hopes of imaging a greater city, we’d like to propose the following platform. Have at least two open-air city council meetings at Charles Clark Square, encourage a large audience, showcase democracy in action.Find a private partner and retrofit the Armouries tomorrow: get the WSO their permanent venue, renovate smaller spaces for artist studios, and keep larger rooms for small theatre performances.Sort out the Capitol Theatre appropriately.

scenes ESLai . com Conversational ESL EFL Mobile App Learning Simulations scenes Please use the drop-down SCENES MENU ABOVE for access to the individual Scenes. New Scenes are added regularly. 1. It’s a rainy night. Now available in a BEGINNER version and an INTERMEDIATE version on MOBILE WEB! The Beginner Version is accessed from any data enabled mobile device: 2. This a BEGINNER LEVEL conversational experience simulating a casual conversation about planning the day. 3. abcDog Children’s ESL Series In an interactive story format, the eslDog Series is designed for children. Recent Posts About Us ESLai.com is brought to you by contentAI studios, a unit of zyntroPICS Inc. The technology and production team responsible for the Apps have a deep background in interactive training, marketing and entertainment. Connect with Us Our Brands © 2014 · zyntroPICS Inc.

New Canadian Social Enterprise Guide is now available Enterprising Nonprofits Program has just released the new Canadian Social Enterprise Guide. This fabulous resource gives you everything that you ever wanted to know about starting and operating your social enterprise. Download your free copy here. The Canadian Social Enterprise Guide was originally published in 2006 and was the first extensive and comprehensive published resource, tool kit, and collection of social enterprise stories in Canada. If you would like to purchase printed copies for a classroom or library, please click here. Serious Games Initiative Listen to the City: an Overview Posted by Justin on Tuesday, August 24, 2010 · 3 Comments Back in January, we asked nearly 40 people two questions: Why did you first come to Windsor? and Why are you still here? The answers we got over the hour and a half we spent together at Phog Lounge in downtown Windsor presented not just answers to those two questions, but sprawling conversations about what it means to live in Windsor, how we’ve shaped this city, and how it’s shaped us. The five-minute edit you can listen to below is just a slice of everything that was talked about that night. There were many voices that we unfortunately couldn’t include in the edit below, but only because of the amazing conversations those folks had, which in turn didn’t offer the kind of brief samples similar to those that we cut together. Listen to the five-minute excerpt: (updated – thanks to Stephen Surlin for finessing our mix) Or you can also download the MP3 of Listen to the City.

Movement aims to get serious about games By Jinny Gudmundsen, Gannett News Service Traditional console games have been hogging the spotlight for years, especially with events like the Electronic Entertainment Expo (E3) allowing vendors to hawk their wares in Hollywood. But there's a movement afoot that's quietly trying to do something more substantial. Known as the Serious Games Movement, this genre is "about taking resources of the (video) games industry and applying them outside of entertainment," says Ben Sawyer, co-founder of Digitalmill Inc., and one of the organizers of the Serious Games Summit. The Serious Games Movement got a start in 2002 when the U.S. As academics began to recognize the potential scope of video game technology, conferences sprang up. In 2004, the first Serious Games Summit was held at the Game Developers Conference. In October, the Federation of American Scientists held their own Summit on Educational Games in Washington. Foundation contributions Governmental support "We want to get into kids' heads.

How to Briefly Describe Amazing Things: A Recap of 30 Days of SRSI Posted by Justin on Friday, July 23, 2010 · Leave a Comment We’ve been really lucky. For a couple of years now, we’ve been able to do the work that we’ve wanted to do, make the kinds of changes that we want to see, and create a set of projects that have kept us interested in staying in Windsor. The Storefront Residencies for Social Innovation wrapped up a couple weeks ago. For 30 days, we hosted 25 amazing artists and artist collectives, all of whom worked in downtown Windsor and generated a huge number of new ideas, initiatives, and relationships. For 30 days, we were very, very lucky. From June 11th to July 11th, we saw projects that redefined the idea of what BIAs could do, generated new models for micro-economies by exchanging food for stories, unravelled and reassembled long lost sweaters, and introduced an unprecedented level of investigation into the personal histories found in homes (and gardens) across the city. All of these things happened here in Windsor in just 30 days.