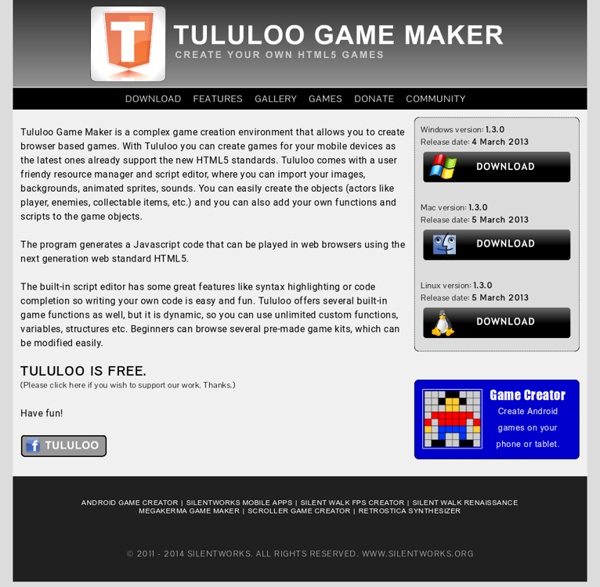 Here Is A Great Tool for Creating Educational Video Games to Use in Class February 10, 2016Pixel Press is an excellent application that enables you to draw your own video games. Teachers can create educational video games to use in class without the need for any coding skills. The process is very simple: use pen and paper to draw your game, take a picture of it via your iPad’s camera and Pixel Press does the rest and bring your game to life. You can either create on paper with ‘Draw-on-Paper’ and take a picture of it or use ‘Draw-in-App’ to directly draw on screen.

deanm/pre3d @ GitHub Pre3d, a JavaScript 3d rendering engine Play with an application built using Pre3d, like GraphyCalc. See a demo like monster, colorscube, lorenz84, or gji. MicroWorlds EX We think our products are great! But don't just take our word for it, here's what teachers have to say... "I was first introduced to Logo about 20 years ago at the University of Nebraska. About 10 years ago when the opportunity came up to teach a 6-week exploratory class for seventh graders, I knew right away that I wanted to use MicroWorlds!

Bartle's Taxonomy of Player Types (And Why It Doesn't Apply to Everything) Richard Bartle co-created MUD (Multi-User Dungeon), the text-based precursor to today's MMORPGs, while studying at Essex University. He ended up formulating the theory that all MUD players could be broken down into four main types: killers, achievers, explorers, and socializers. This theory has since been used in all sorts of game design situations where it doesn't apply - let's look at what exactly it does tell us. JS3D: 3d Javascript Graphics Layer Click the cube to toggle animation Skip to: What is JS3D? About An overview of Kodu. (Click to play) Kodu lets kids create games on the PC and Xbox via a simple visual programming language. Kodu can be used to teach creativity, problem solving, storytelling, as well as programming. Anyone can use Kodu to make a game, young children as well as adults with no design or programming skills.

DELIGHT ‐ Native to the Web Realistic Camera Model Demo This demo features a physically based camera which includes techniques like bokeh depth of field, glare, lens flares, film grain, dynamic color grading and more. It uses advanced techniques such as physically based shading, deferred rendering, HBAO and variance shadow mapping. Please select medium quality if your computer is not on the high-end. Why Kids Should Make the Video Games They Love to Play When educator Lynn Koresh hears from kids that they want a career doing something with computers, she asks, “To do what with computers?” Adults often encourage kids to pursue science, technology, engineering and math (STEM) skills, and computing classes are usually a first stop. But Koresh knows it’s the real-world applications of computational thinking and coding language skills that bring such knowledge to life.

Developers The SDK contains everything a developer needs to rapidly get their project going, polished and deployed, including: A complete version of the JavaScript Engine code is available for developers to browse and use during debugging. The Engine is completely modular allowing developers to select exactly what features they want to use, and modify or replace anything that isn't suitable for their game. The SDK includes a wide range of feature and code samples. The aim of these samples is to cleanly demonstrate to developers how to use all the different parts of the game engine. Making Games: The Ultimate Project-Based Learning Part 6 of MindShift’s Guide to Games and Learning. As game-based learning increases in popularity, it’s easy to get pigeon-holed into one particular way of thinking about it or one way of employing it. This is true regardless of how teachers feel about gaming in the classroom, whether they’re for or against it. One common objection to game-based learning is that students will sit in front of screens being taught at. Sure, games are interactive, but on some level, don’t they still just replace the sage on the stage with the sage on the screen? Does a joystick really change the nature of pedagogy?