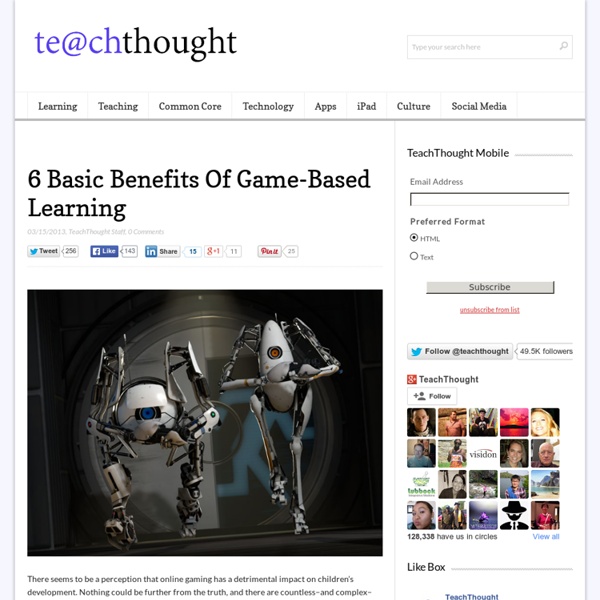 There seems to be a perception that online gaming has a detrimental impact on children’s development. Nothing could be further from the truth, and there are countless–and complex–reasons for this, but it also makes sense at the basic benefits of game-based learning. Of course children should not spend every single second of the day staring at a computer screen. Nevertheless, education and online gaming certainly aren’t enemies either. In fact, playing online games may be something which can enhance a child’s learning and development. 1. Games often revolve around the utilization of memorization This not only relates to games whereby children have to remember aspects in order to solve the game, memorize critical sequences, or track narrative elements. 2. This is something which is very important because we live in a world which is dominated by technology. 3. Most games require children to think quickly. 4. 5. 6. Related:  GAMES & GAMING • Games in Education • Gamification

How Minecraft Can Be Used To Create A Video Game Minecraft is not only a standalone video game that creates a digital sandbox for players to play, create, design, and publish thinking, but it also can be used for a different purpose entirely–to create other video games. How is this possible? A few facts to clarify: 1. Minecraft is a video game. 2. 3. 4. The video below also includes four other examples of what can be done with Minecraft, including a television (that seems to work), Connect 4, and an interesting experiment in scale. 3 Steps To Creating A Game With Minecraft Creating a video game with it, then, is as simple as creating the rules to any other “game”: 1. 2. 3. The possibilities for using minecraft in learning are staggering really, perhaps only stunted by the perception of it as “just a game.”

Gamification and Game Based Learning: The Future of Education Shawn Young, a Canadian high school teacher and creator of “Classcraft,” argues that it is possible to transform a classroom with gameplay using basic technology. In the program he created for his own physics classroom (and has so far sold to 3,500 other teachers in 75 countries), students take on the roles of warriors, healers or mages. They work together as teams, and gain or lose powers through their classroom behaviors, reaping real-life benefits, such as permission to eat in class, and consequences like detention. “Classcraft” requires only a single laptop and a projector; a basic version is available for free, and a premium version sells for $1 per student. Although the education market can be difficult to break into, Young says, “Classcraft” helps address “human problems” that concern educators, such as suspensions, fights and truancy. “In education, we have a distribution problem,” Cannon-Bowers says.

Video Games & the Future of Learning By Jan L. Plass, with Melissa Biles, Jonathan Frye & Tsu-Ting Huang Digital games have become an integral part of the daily lives of millions of individuals, and are increasingly recognized for their potential as environments for supporting learning. In fact, with their vast popularity and singular ability to engage young people, digital games have been hailed as tools that may enable a new paradigm for education. Because of this great potential, as described at the recent NYU Teaching with Technology Conference, Courant computer scientist Ken Perlin and I have joined with colleagues from six other universities to explore their educational use and to guide their creation through empirically-supported design patterns. With support from Microsoft Research, we formed the Games for Learning Institute (G4LI), where we study games for learning, develop design patterns, build game prototypes, and test them in a variety of learning settings. Jan L.

Game-Based Learning? 30 Non-Violent Video Games That Don't Suck One person’s mushroom stomper is another’s person’s fungus murderer. So it may not be absolutely correct to say that every single one of these games is entirely free from any matter of violence whatsoever. In fact, in Braid, you can indeed “die” falling on spikes. But for the most part, they are indeed non-violent games, and certainly nothing approach the reality of many modern “shooters.” Violence is a matter of degrees if not interpretation. Truth be told, most non-violent games aren’t fun. But there are exceptions, and that list is growing. Whether for game-based learning, or simply for fun to play, any of these games represents an impressive design achievement, and is definitely worth a play. 30 Non-Violent Video Games For Game-Based Learning That Don’t Suck 1. 2. 3. 4. 5. 6. 7. 8. 9. 10. 11. 12. 13. 14. 15. 16. 17. 18. 19. 20. 21. 22. 23. 24. 25. 26. 27. 28. 29. 30. Game-Based Learning?

8 Principles Of Gamified Learning - 8 Principles Of Gamified Learning by Jonathan Cassie As our society continues to evolve in response to the rapid changes brought on by universally accessible mass technology, the act of teaching (and the experience of learning) has been under significant pressure to adapt. Since the turn of the century, a number of approaches have been offered by scholars and practitioners to answer this challenge. Simply put, Industrial-age instructional techniques leave many Information-age students in the dust. In my book, Level Up Your Classroom, I develop eight research-informed principles that support gamified instruction as an approach to teaching and learning. Gamified instruction is not game-based learning (GBL). One of the most popular board games of the past year is called Machi Koro. Imagine trying to teach the Salem Witchcraft Crisis to middle school students. Indeed, the teacher might first have students play with cards that accelerate the crisis and learn how hysteria develops.

Gamification in Education and Business ​Presents a concrete guideline for implementation and a strong theoretical basis to properly implement gamification technology Includes chapters covering the “dark side” of gamification and how to solve problems with implemented systems Offers case studies that demonstrate applied gamification; covering pitfalls and guidelines to successful implement a project​ This book is dedicated to applied gamification in the areas of education and business, while also covering pitfalls to avoid and guidelines needed to successfully implement for a project. Using different theoretical backgrounds from various areas including behavioral economics, game theory, and complex adaptive systems, the contributors aim to help readers avoid common problems and difficulties that they could face with poor implementation. The book’s contributors are scholars and academics from the many areas where the key theory of gamification typically comes from. Content Level » Research Show all authors Hide authors

Exactly How To Teach With Video Games In The Classroom The idea of teaching with video games is an exciting concept leading to a challenging practice. Right off the bat the topic is a bit polarizing, the whimsical connotation of “games” juxtaposing harshly with the rigorous tones of classical academia. But past that, there is the larger issue of practical integration. Even if you’re soundly convinced about their merit and place in learning, how can you consistently integrate them in the classroom? As much as any other theme, the 21st century classroom is about diversity–infinite possible pathways between content and students, resulting in self-directed learning as much as data-driven “teaching.” But you’ve probably heard the rhetoric before. Technology in the Classroom Integrating technology in the classroom is a multi-faceted affair that can seem overwhelming. There is the matter of instruction—what is the teacher’s role? And assessment? Exactly How To Teach With Video Games In The Classroom: 10 Specific And Practical Ways 1. 2. 3. 4. 5. 6.

How Game-Based And Traditional Learning Are Different There are several big movements underway that are worthy of debate and possible consideration as we look to help education become the 21st century, user-centered, on-demand, engaging, technology-centric activity that it has not been for much of its existence. Game-based learning (GBL), or gamification, is one of the models that commonly gets touted as a cure-all for the problems with education because of the popularity of gaming in our society (New Media Institute). While there are problems with the gamification movement as it currently stands, the model has several areas in which it differs sufficiently from traditional education to make it an intriguing possibility. Authenticity This is one of the most interesting and controversial areas where GBL can separate itself from what we see in the traditional classroom. Games have the potential to allow students to do exactly that. Student Engagement The hidden agenda of games and play is to teach. Creativity and Innovative Thinking

The skills developed would be at teacher's dream come true. The key is determining what educational value does the game has. Each game must be evaluated for what the learner needs. How will it enhance learning? Food for thought! by psmeyers Oct 4