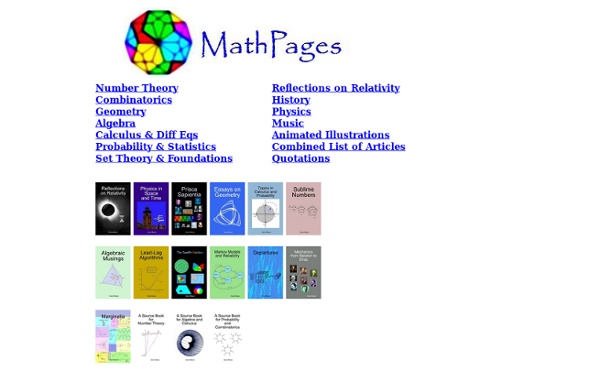 9 Mental Math Tricks Math can be terrifying for many people. This list will hopefully improve your general knowledge of mathematical tricks and your speed when you need to do math in your head. 1. Multiplying by 9, or 99, or 999 Multiplying by 9 is really multiplying by 10-1. So, 9×9 is just 9x(10-1) which is 9×10-9 which is 90-9 or 81. Let’s try a harder example: 46×9 = 46×10-46 = 460-46 = 414. Flash Maths Top rated maths activities Mean from Frequency Tables Compound Interest Calculator Duality From Wikipedia, the free encyclopedia Duality may refer to: Mathematics[edit] Philosophy, logic, and psychology[edit] Science[edit] 20 Free Tools for Making Comics and Cartoons for Teaching and Learning There are so many good free tools for creating comics and cartoons on the web, as well as apps for tablets and smartphones. I’ve built out a list of fun tools I am looking forward to trying out over the upcoming holiday break. I can’t wait to brainstorm creative ways to leverage these in lessons!

The Quadrants of the Cartesian Plane The Quadrants of the Cartesian Plane (page 3 of 3) Sections: Introduction to the plane, Plotting points, The four quadrants The two axes divide the plane into four sections called "quadrants". The quadrants are labelled with Roman numerals (not Arabic numerals), starting at the positive x-axis and going around anti-clockwise: Learning the Habits of Mind that Enable Mathematical and Scientific Behavior Math/Science Matters: Resource Booklets on Research in Math and Science Learning Booklet 2 Issues of Instructional Technique in Math and Science Learning