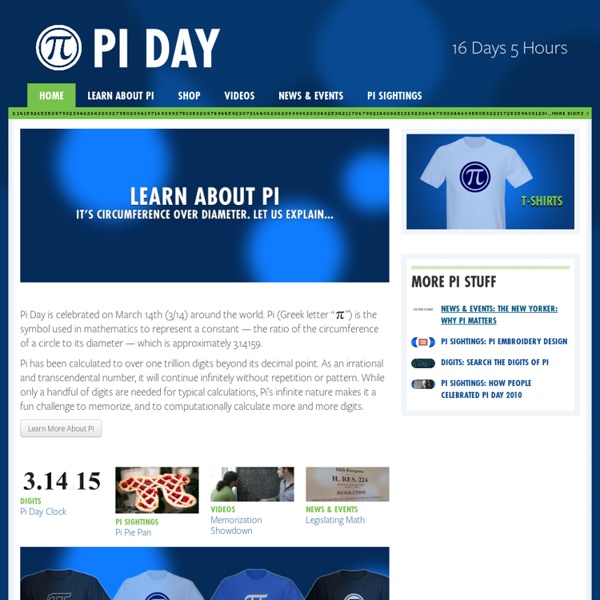 Una web que te ayuda a aprender matemáticas - Sangakoo DIA-MUNDIAL-NUMERO-PI - home Einstein notation - Wikipedia In mathematics, especially in applications of linear algebra to physics, the Einstein notation or Einstein summation convention is a notational convention that implies summation over a set of indexed terms in a formula, thus achieving notational brevity. As part of mathematics it is a notational subset of Ricci calculus; however, it is often used in applications in physics that do not distinguish between tangent and cotangent spaces. It was introduced to physics by Albert Einstein in 1916.[1] Introduction[edit] Statement of convention[edit] is simplified by the convention to: The upper indices are not exponents but are indices of coordinates, coefficients or basis vectors. In general relativity, a common convention is that the Greek alphabet is used for space and time components, where indices take on values 0, 1, 2, or 3 (frequently used letters are μ, ν, ...) In general, indices can range over any indexing set, including an infinite set. Application[edit] Vector representations[edit] where

Wonders of Math - The Game of Life What is the Game of Life? by Paul Callahan Rules of the Game of Life Life is played on a grid of square cells--like a chess board but extending infinitely in every direction. To apply one step of the rules, we count the number of live neighbors for each cell. A dead cell with exactly three live neighbors becomes a live cell (birth). Note: The number of live neighbors is always based on the cells before the rule was applied. In Life, as in nature, we observe many fascinating phenomena. The rules described above are all that's needed to discover anything there is to know about Life, and we'll see that this includes a great deal. Life Patterns A good way to get started in Life is to try out different patterns and see what happens. The R-pentomino is the first pattern Conway found that defied his attempts to simulate by hand. What Kinds of Objects Emerge in Life? Still Life Objects Some of the most common objects in Life remain the same from step to step. How Complex Can Life Get? Buttons

Khan Academy Discovery of classic pi formula a ‘cunning piece of magic’ : NewsCenter While most people associate the mathematical constant π (pi) with arcs and circles, mathematicians are accustomed to seeing it in a variety of fields. But two University scientists were still surprised to find it lurking in a quantum mechanics formula for the energy states of the hydrogen atom. “We didn’t just find pi,” said Tamar Friedmann, a visiting assistant professor of mathematics and a research associate of high energy physics, and co-author of a paper published this week in the Journal of Mathematical Physics. “We found the classic seventeenth century Wallis formula for pi, making us the first to derive it from physics, in general, and quantum mechanics, in particular.” The Wallis formula—developed by British mathematician John Wallis in his book Arithmetica Infinitorum—defines π as the product of an infinite string of ratios made up of integers. Friedmann did not set out to look for π nor for the Wallis formula. which can be reduced to the classic Wallis formula.

Math Monday: Hula Hoop Geometry, Part 1 By Glen Whitney for the Museum of Mathematics Math Mondays have so far featured a wide array of different items from which one can make a tremendous variety of geometric constructions, but there has not yet been one on hula hoops. This week and next we’ll remedy that oversight. Also, the postings so far have almost entirely shown the constructions as fait accompli, so this series will also try to give a bit of insight into the process of devising a new creation. First, why hula hoops? They’re a pretty cheap source of large, pre-made circles, generally decently symmetric and strong. Assignment: can you do the same thing with six hula hoops? For a recent event, MoMath wanted a large-scale public construction activity, so based on our success with hula hoops to date, designer Tim Nissen envisioned a gigantic pyramid of hoops — here’s the initial conception: We even managed to combine four of the order-1 units into an order-2 tetrahedron pretty nicely: To be continued… Gareth Branwyn Related

The Most Mathematically Perfect Day of the Year - Scientific American Blog Network Whether you write it 6/28 or 28/6, today is a perfect day. A perfect number is a number that is the sum of its factors besides itself, and 6 (1+2+3) and 28 (1+2+4+7+14) are the first two perfect numbers. Hence, June 28 is a perfect day. Perfect numbers are few and far between, so don't hold out for a celebration in which the year is perfect as well. The last time that happened was in 496, and the next time is over 6,000 years away, in 8128. Mathematical date enthusiasts will note that today is also Tau Day, if you didn’t get enough circle constant celebration in March. If you’d prefer to keep the celebration mathematical, you could of course go looking for the next perfect number. No matter how you choose to celebrate, please avoid any involvement in perfect crimes or perfect storms.

Bac à Maths The Tao of Tau - Scientific American Blog Network “It is lamentable that there’s no famous dessert named ‘tau,’” Michael Hartl told me recently at a sunny, stylish café in Venice, California. He reluctantly admitted that pi, the constant approximately equal to 3.14, has this one advantage over tau, a number he introduced to replace it. Pastry puns aside, Hartl has achieved minor internet fame for arguing that tau is superior to its vastly better known cousin. In his popular 2010 “Tau Manifesto,” inspired by Bob Palais’ 2001 essay “Pi Is Wrong,” Hartl posits that pi, the ratio of a circle’s circumference to its diameter, creates unnecessary complications in many formulas. A more appropriate number to work with when it comes to circles would be 2pi, or about 6.28. “The circle constant ought to be defined in terms of radius,” Hartl told me over the chatter of other café patrons. Full disclosure: pi is my favorite number and the one I am most known for writing about (i.e. while on staff at CNN in 2009, 2010, 2011, 2012, 2013 and 2014).