The Fibonacci Numbers and Golden section in Nature - 1 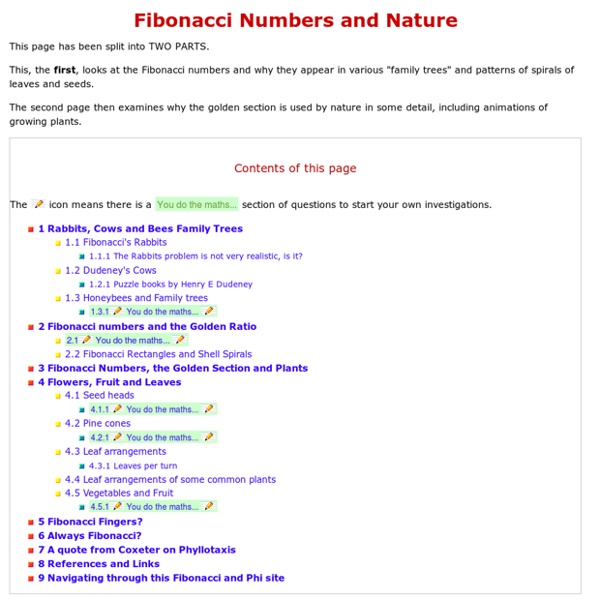 This page has been split into TWO PARTS. This, the first, looks at the Fibonacci numbers and why they appear in various "family trees" and patterns of spirals of leaves and seeds. The second page then examines why the golden section is used by nature in some detail, including animations of growing plants. Let's look first at the Rabbit Puzzle that Fibonacci wrote about and then at two adaptations of it to make it more realistic. This introduces you to the Fibonacci Number series and the simple definition of the whole never-ending series. Fibonacci's Rabbits The original problem that Fibonacci investigated (in the year 1202) was about how fast rabbits could breed in ideal circumstances. Suppose a newly-born pair of rabbits, one male, one female, are put in a field. How many pairs will there be in one year? At the end of the first month, they mate, but there is still one only 1 pair. The number of pairs of rabbits in the field at the start of each month is 1, 1, 2, 3, 5, 8, 13, 21, 34, ... .

Fibonacci Numbers, the Golden section and the Golden String Fibonacci Numbers and the Golden Section This is the Home page for Dr Ron Knott's multimedia web site on the Fibonacci numbers, the Golden section and the Golden string hosted by the Mathematics Department of the University of Surrey, UK. The Fibonacci numbers are The golden section numbers are Chaos & Fractals Chaos is a relatively new and exciting science. Although chaos was often unfavorably viewed its early stages, scientists now perform active research in many areas of the field. Presently, there are several journals dedicated solely to the study of chaos. This website was written in conjunction with a talk given for Intermediate Physics Seminar of the Department of Physics and Astronomy at the Johns Hopkins University. It is intended to merely highlight a few of the more interesting aspects in the field of chaos. For further information, please consult the reference section of this document.

Effective Teachers of Numeracy in Primary Schools: Teachers' Beliefs, Practices and Pupils' Learning. Paper presented at the British Educational Research Association Annual Conference (September 11-14 1997: University of York) Abstract This paper reports on part of a study examining the links between teachers' practices, beliefs and knowledge and pupil learning outcomes in the development of numeracy with pupils aged five to eleven. From a sample of 90 teachers and 2000 pupils, we developed detailed case studies of 18 teachers. As part of these case studies we explored the teachers' beliefs about what it means to be numerate, how pupils become numerate and the roles of the teachers. From the data three sets of belief orientations were identified: connectionist, transmission and discovery.

Amazing Resonance Experiment – The Sacred Geometry Of Sound This experiment is the Chladni plate experiment. It uses a tone generator, a wave driver (speaker) and a metal plate attached to the speaker. First add sand to the plate then begin playing a tone. Certain frequencies vibrate the metal plate in such a way that it creates areas where there is no vibration. The sand “falls” into those areas, creating beautiful geometric patterns. As the frequency increases in pitch the patterns become more complex.

Fibonacci Leonardo Bonacci (c. 1170 – c. 1250)[2]—known as Fibonacci (Italian: [fiboˈnattʃi]), and also Leonardo of Pisa, Leonardo Pisano, Leonardo Pisano Bigollo, Leonardo Fibonacci—was an Italian mathematician, considered as "the most talented Western mathematician of the Middle Ages.".[3][4] Fibonacci introduced to Europe the Hindu–Arabic numeral system primarily through his composition in 1202 of Liber Abaci (Book of Calculation).[5] He also introduced to Europe the sequence of Fibonacci numbers (discovered earlier in India but not previously known in Europe), which he used as an example in Liber Abaci.[6] Life[edit] Fibonacci was born around 1170 to Guglielmo Bonacci, a wealthy Italian merchant and, by some accounts, the consul for Pisa. Guglielmo directed a trading post in Bugia, a port in the Almohad dynasty's sultanate in North Africa.

library.thinkquest.org/3703/ As of July 1, 2013 ThinkQuest has been discontinued. We would like to thank everyone for being a part of the ThinkQuest global community: Students - For your limitless creativity and innovation, which inspires us all. Archimedean solid "Identical vertices" are usually taken to mean that for any two vertices, there must be an isometry of the entire solid that takes one vertex to the other. Sometimes it is instead only required that the faces that meet at one vertex are related isometrically to the faces that meet at the other. This difference in definitions controls whether the elongated square gyrobicupola is considered an Archimedean solid or a Johnson solid: it is the unique convex polyhedron that has regular polygons meeting in the same way at each vertex, but that does not have a global symmetry taking every vertex to every other vertex. Based on its existence, Branko Grünbaum (2009) has suggested a terminological distinction in which an Archimedean solid is defined as having the same vertex figure at each vertex (including the elongated square gyrobicupola) while a uniform polyhedron is defined as having each vertex symmetric to each other vertex (excluding the gyrobicupola).

Mr A, Mr C and Mr D Present KS2 Songs Welcome Teachers, Children and Parents! We've been seeing huge numbers of hits from teachers lately but also a growing number of children and parents logging onto our blog, leaving comments and sharing songs with their friends. Thank you, one and all.This week Mr A, who is becoming more obsessed with funky beats by the day, has a song about fractions to help you understand a complex issue in maths. Wait! Hold on! Fibonacci number A tiling with squares whose side lengths are successive Fibonacci numbers In mathematics, the Fibonacci numbers or Fibonacci sequence are the numbers in the following integer sequence: or (often, in modern usage): (sequence A000045 in OEIS). The Fibonacci spiral: an approximation of the golden spiral created by drawing circular arcs connecting the opposite corners of squares in the Fibonacci tiling;[3] this one uses squares of sizes 1, 1, 2, 3, 5, 8, 13, 21, and 34. By definition, the first two numbers in the Fibonacci sequence are either 1 and 1, or 0 and 1, depending on the chosen starting point of the sequence, and each subsequent number is the sum of the previous two.